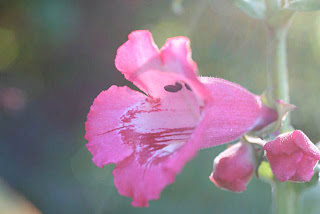 Angela at Cottage Magpie has challenged bloggers to do a post on pink things around our homes for Valentine's Day. Being a gardener, and not being one who uses pink in the house too much, I naturally thought of pink-flowered plants, the perfect gift for many a romantic soul.

Pink isn't a colour I wear much of--never was a pink girly girl as a child, more the tomboy with scuffed knees and dirt-coloured teeshirts and shorts! Nor is it my absolute favourite garden colour. In fact, I thought of doing an "I don't like pink" much in the way Nan Ondra did an "I don't like white" post to rave reviews. The results would be probably surprisingly the same; that I do like it. 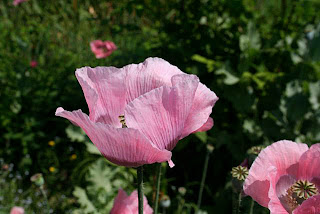 It depends too on the interpretation of pink. Do we mean shell pink, rose pink, hot pink like fuchsia, (or is fuchsia closer to magenta?) or some other colour? Let's see....this annual poppy is definitely a happy pink with subtle colour changes. But a poppy could come in any colour from black to blue to pink to jubilant orange and I'd love it. 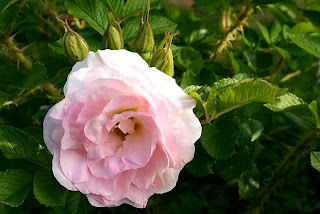 I was thinking I don't have much in the way of pink roses (they lean closer to magenta, some of them) and then I remembered one of my favourites is the wonderful rugosa Polareis, softly pink and white. It's also divinely fragrant and I'd rather have one fragrant rose than a dozen scentless longstems from the florist. 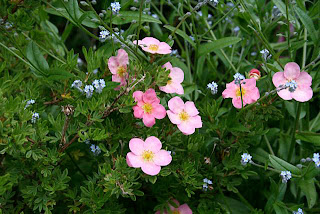 Normally, anything pink and related to breast cancer sends me into a rage, mostly because I find the whole fundraising thing around cancer to be rather repugnant--so much money is spent on PR, but that's a tantrum for another day. However, I bought this pink potentilla intentionally; money from it was being donated to a local group for breast cancer survivors, and I bought it to put in my former mother-in-law's memory garden, who died nearly two years ago. 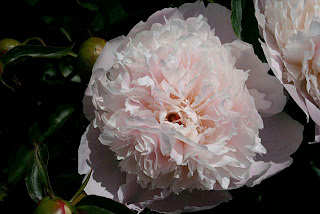 Another subtly pink flowered plant, this one a peony of unknown name but exquisite fragrance and porcelain like beauty. 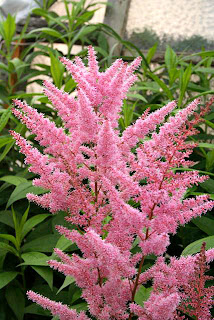 Astilbes are one of those plants I love whether they're in flower or not, because their foliage is just so great. Some of ours came from a nursery where they were simply labeled "White" "Red", "Pink" etc. This one was labeled "White"...but it's just fine in pink, too! 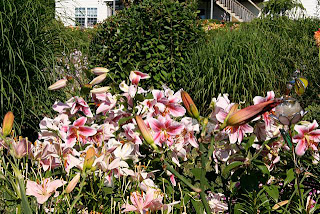 From a garden I visited this summer, a marvelous collection of lilies, in a rainbow of shades, but the pink ones really got me; especially the fragrant ones, which were beyond exquisite. 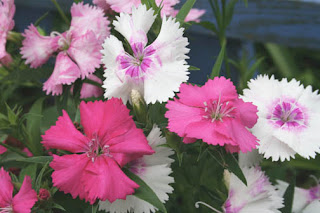 And I love Pinks, meaning of course Dianthus--annual pinks, perennial pinks, they're all good and I can't possibly get enough of them, especially if they're nicely fragrant, which these are. 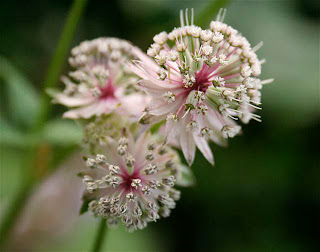 Okay, maybe I'm splitting pink hairs a bit. This flower is mostly white and green, but with a bit of pink and deeper rose to it. Astrantia are one of my most beloved plants the past couple of years. The flowers aren't huge, but they're so perfectly patterned; I've been known to sit and just LOOK at one for long periods of time. A kind of garden meditation. 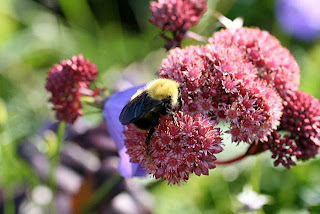 A bit of a deeper rose-pink now in this late-summer sedum, with a real cute bumblebee as bonus. Late summer and fall is actually when I most like pink; it tempers all the golds, rusts, oranges and reds that are in the garden, slightly cooling them, although put something pink in the wrong spot and it even screams "NO" to me! 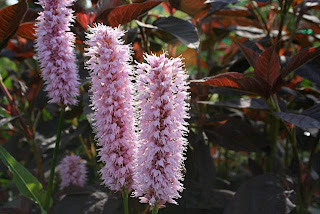 I've grown very fond of this fleeceflower, which behaves nicely, flowers profusely, has a bit of a rest, and then throws more blooms later in the season, for good measure. 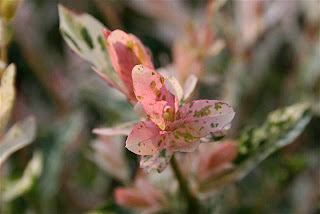 We can't forget pink foliage, either. Keeping a nishiki willow somewhat pruned (I just prune lightly) promotes new growth with that lovely pink in with the green and cream; 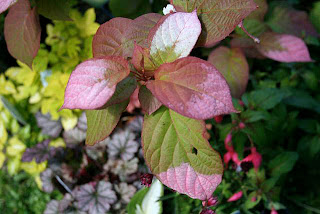 But this hardy kiwi takes the pink cake for rosy foliage, wouldn't you say?
There, that's enough pink for today...it cheered my heart too, given that although the sun is out, the snow is blowing and drifting into huge waves now in the yard and road.