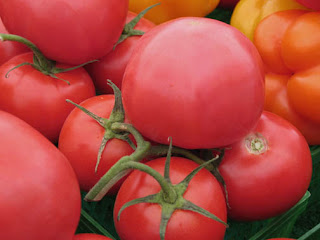 One of the curious things that always happens every winter is that I develop an overwhelming urge for tomatoes. Mmmmmm, tomatoes. You know what I mean, don’t you? 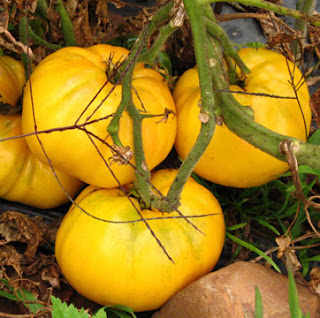 Sun ripened, flavourful, juicy, tomatoes, not the hard, plastic-like nuggets that we’re seeing in stores at this time of year. Maybe they’ve been genetically engineered to store for approximately twenty seven years, and are mostly uniform in shape and size, perfect for slicing on top of that hideous fast-food hamburger. They’re just awful.

Even the ones that are greenhouse grown or supposedly ‘vine ripened’ don’t taste like much of anything. In desperation, I will resort to eating them, at least on broiled sandwiches or pizza or chopped up in salsa or salad, rather than be totally tomato-less for the months until we get real field tomatoes again. I wait for those first truly vine-ripened tomatoes with as much anticipation as we do the first strawberries, the first new potatoes, the first sweet corn. But especially the tomatoes.

Now, here’s a confession for all of you who struggle with purple thumbs, and which may cause vast amusement to the tomato pros among you. I don’t grow tomatoes well. This would have scandalized my dear, departed Dad, had he known. My father was the champion of tomato growers in his community, supplying neighbours, fellow pilots, and other friends with a horde of ripe, huge, delicious tomatoes; beefsteaks, cherry type, regular slicing types, he grew them all. We all used to refer to them as triffids because my father’s tomato plants were so huge and robust, tied up in his tiny greenhouse beside the garage, laden down with fruit of all sizes, pushing the tops of their leafy heads against the top of the greenhouse. Happily, they never pulled up stakes (or roots) and started walking. Nor did they eat people, at least none that we were aware of.

My problem with growing tomatoes is the climate here in my community. It’s regularly at least 10 degrees (Fahrenheit) cooler up here than in the Valley; people come up here in the summer to get away from the Valley heat. But then they get here and find out that we’re wrapped in fog. Lots of it. Really thick, cool, moisture-giving fog, great for the perennial beds and lawns, but not so good for heat- and sunlight-loving tomatoes. 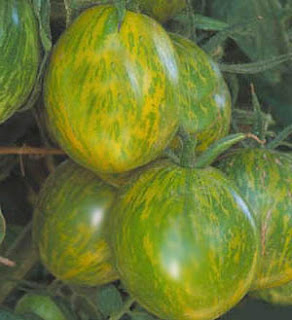 I do try. I have grown great seedlings, and other years bought transplants of heritage tomatoes from local nurseries that have carried a few speciality types. But it’s usually late September before I get any to ripen—even growing them in our little greenhouse, where they do get more heat, when the sun is out, but when we go for days on end in the fog, not much happens. Last year I did fairly well, although I was a bit worried when this was my tomato crop in mid-August (when many of you had been eating ripe tomatoes for weeks!) 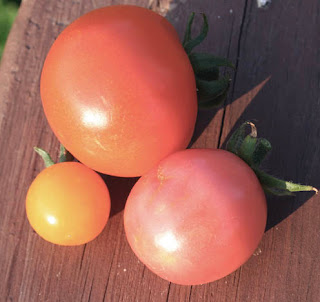 Happily, we actually had a real bounty of tomatoes, I think because I covered the greenhouse floor with landscape cloth before planting the transplants. They got a little more heat, a little more regular moisture, fewer weeds and no dirt on them, and they did ripen earlier than in other years--and keep going until well into October.

It's frustrating work though, but I keep at it, and anyone who loves tomatoes right off the vine eaten like a fresh peach, knows why. There really is nothing like home grown tomatoes, (except the other thing money can’t buy, which according to John Denver was true love). And here’s your botanical bit of trivia, though any tomatophile already knows this. The tomato has had a number of other names in its storied career, and indeed the botanical name, Lycopersicon, means ‘Wolf Peach’--although now they’re Solanum lycopersicum; yet another point for the taxonomists to crow over!

What I like to grow is heritage tomatoes, not only because they come in a rainbow of colours and shapes and sizes, but in a world of flavours, too. ‘Caspian Pink’ is a sweet, and decidedly pink, tomato, delicious in sandwiches or salads; ‘Black Krim’ has this unique, smokey flavour that is hard to describe to anyone who hasn’t tasted it. 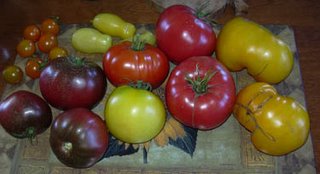 I usually have a yellow or red Brandywine, a couple of newer cultivars like ‘Lemon Boy’ or ‘Sungold’ both of which are different and tasty. And of course I have my staples, ‘Sweet Million’ cherry type, and ‘Scotia’, which tolerates the cool weather without a fuss.

In past years I’ve bought seed and started them, but I only need one plant of each of a half dozen or so different varieties. What, then to do? There was a nursery that carried a lot of the heritage tomatoes I love, and that I could buy one plant from, but it sadly closed after the 2006 growing season. Another nursery carried a few special varieties last year, but I don’t know if they’ll be open this year either. One of my newsletter readers is experiencing the same problem, so I may resort to starting a bunch of seedlings again, in which case, anyone want a few Black Krims? Or Green Zebra? Or Yellow Brandywine? Pity we can’t mail transplants electronically, isn’t it?

And this just in…I may have found a source for some heritage varieties from a grower who is encouraged to try. Stay tuned…I’ll get my Black Krims yet! 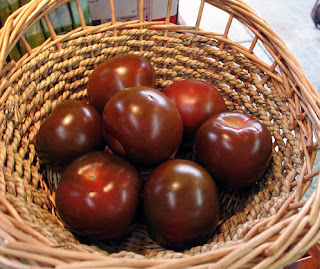