Colour in the Garden: Acid Green, Chartreuse or Gold? 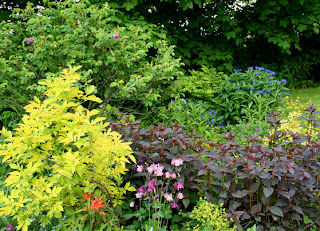 The gang over at Gardening Gone Wild know how to help us get through the long winter months. Even though some garden bloggers are exulting in blooms from hellebores to crocus to lots and lots and LOTS of snowdrops, (and those in the southern Hemisphere are just nicely into summer), it's a bit of a drudge as we slog and trudge and grumble through the endless days of FARCH. So we're having a colour party to help us cope. 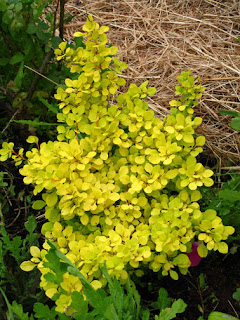 Because this particular season is the one of the least light, I thought it would be fun to use the brightest colour first. Some other bloggers have also written glowingly about chartreuse in the past few days. Mr. McGregor's Daughter got me especially excited with her stirring ode to this curious colour, which I saw referred to as the new neutral in one of BHG's magazines. On first glance, chartreuse doesn't LOOK neutral, does it? It screams "look at me, I'm HERE!" But it goes really, really well with just about any other colour, helping some to pop, calming others down a bit, and just plain causing jubilation with other plantings. 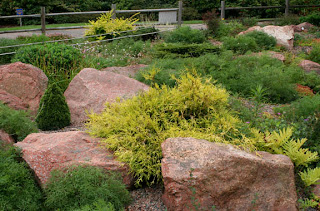 I've seen chartreuse referred to as 'acid green' by some trendy writers, and I guess that's as good a description as "mountain dew green" or 'antifreeze yellow'. Technically, chartreuse is between green and yellow, though I've also seen some refer to it in foliage as gold. Well, I'm not going to split hairs on that, as you'll see in a bit. Let's just say that I like this colour a lot, and go from there with a look at some shrubs and trees that make me happy.

So far in this post we have a gold-foliaged elder (long since missing its name, as it's been planted for five or six years now), doing a nice echo with lady's mantle, cushion spurge (Euphorbia polychroma) and an unnamed euonymus that I like even without its name. The second photo shows my much-loved Berberis 'Nana Aurea', and in the photo above, another gold barberry and gold threadleafed chamaecyparis. That last photo was taken at the Rock Garden at the Nova Scotia Agricultural College, one of my alma maters, and if you ever get a chance to visit the garden...go! I like the colour echo of the fern right by the chamaecyparis, but I don't know the fern species, unfortunately. I'm sure someone else will. 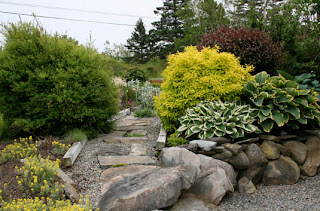 This photo is from a fantastic garden down in West Pubnico on the south shore of the province. Some of the best gardeners I've ever met are down there, including my dear friend Alice d'Entremont of Ouestville Perennials, but this isn't her garden. I love how the basket-of-gold alyssum, the shrub (which I believe is also an elder) and the hostas play off each other with their brilliant chartreuse colour. 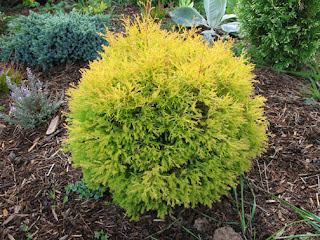 One of my favourite shrubs, which I've written adoringly of before, is Thuja 'Rheingold'. I love the rainbow qualities of this plant, as its foliage segues from chartreuse to soft green to gold to orangy-yellow to bronze as the season progresses. It's in a small garden with a few other compact shrubs, including 'Heatherbun' chamaecyparis, a gold-foliaged juniper (perhaps pfitzer aurea), a blue juniper, and a raft of heaths and heathers. 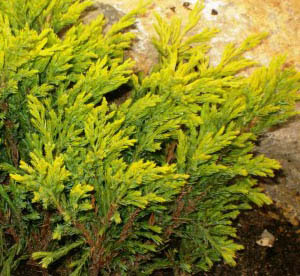 Not the best photo of Juniperus 'Lime Glow', but this remarkable juniper also sports bronze-red tips on its foliage in winter (at least, I think it's sporting it under the snow it's sporting). 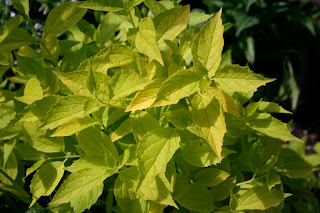 For an absolute outburst of chartreuse, some of the spireas are topnotch, including 'Lemon Princess.' I don't care if most of my spireas flower (except 'Crispa', which is just such a great one); I grow spireas for their foliage colours, either in spring, summer or fall, and the flowers are just a nice bonus. 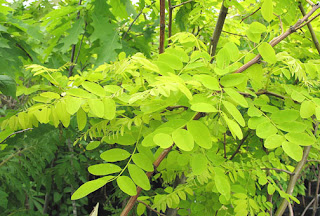 On my 'gotta have' list is this incredible golden locust, Robinia frisea...there are specimens of this around the area, including here on the mountain, and I'm ready to try it in our garden this year. 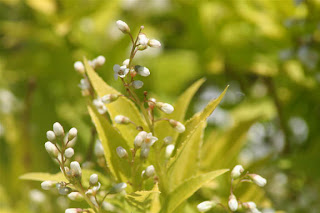 'Chardonay Pearls' deutzia is well-named, and a perfect candidate for my wine and chocolate garden...I'll be talking about that more later in the week, around V-day! 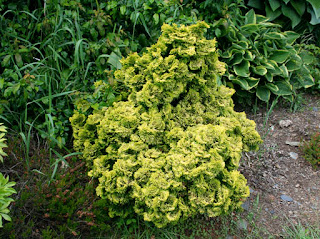 Nan of GardeningGoneWild mentioned that she's not crazy about dwarf evergreens, something to do with a summer's job potting the little suckers way back when. I can't resist them, am adding more all the time, although I've yet to take the plunge and get this golden dwarf hinoki chamaecyparis from a grower friend of mine. I've been testing out other chamaecyparis to see how they do here in the wind, and they've just taken it and kept on growing, so I think it's time... 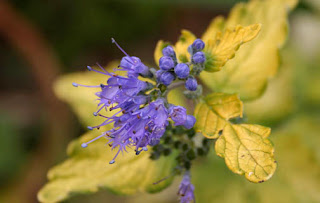 Here's a plant that isn't so much chartreuse as gold, but I include it here because I can. It's 'Sunshine Gold' caryopteris, first planted last summer; if it settles in as beautifully as did a couple others in the garden, it should do very well for us. Someone commented to me last summer that they understood why we have so much gold, white and chartreuse foliage in the garden--we can find it in the fog! True enough...come back next time and see my non-woody offerings.