Reds flowers for the holidays! Part 2

What does a person do when she's knocked flat--and I do mean FLAT--by another bout of diverticular disease? She eats the antibiotics the doctor prescribed, sleeps, and catches up on reading...and blogging. As we head into the weekend and the new year, I'll be doing my top ten plants (in annuals, perennials, shrubs and trees!) but first, another dance with red flowers. 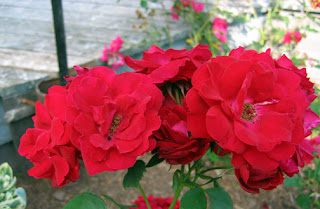 Seems that others feel the same thing I do about red flowers; they're lovely, but don't need to be in vast quantities to make a point. And they can be hard to mix in with other colours unless you're doing something like a sunset garden, with oranges, golds, yellows as well as reds. But they are wonderful. This rose is one of the hardy roses, probably an Explorer, or possibly 'Linda Campbell' or 'Hunter'. It comes from a friend's garden, so maybe she can confirm what it is. 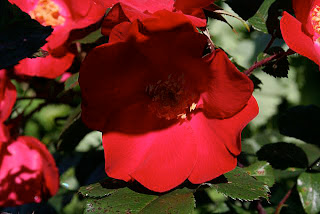 This is one of only two truly red rose I have in our garden (we have plenty of magenta flowered cultivars, which are often labeled as red.) It's Robusta, and an easy to care for shrub rose that just quietly flowers all summer long. It's never shown any sign of blackspot possibly because its leaves are the tough, shiny type that spores would slide right off of. (the other red rose in our garden is Parkdirektor Riggers). 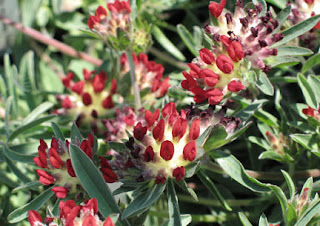 Do you ever see plants that you like, but that somehow you just canNOT remember the name for? This is one of mine. Its botanical name is Anthyllis vulneraria coccinea (maybe that's why I can't remember its name!) also known as kidney vetch or Lady's Fingers. When I was doing a search to confirm its name (I did have it written down as Anthyllis in one of my photos), I learned that it's a member of the Fabaceae, formerly the Leguminosae, also known as the Pea family. Other horticulturally valuable members of this family include lupines, blue false indigo (Baptisia), yellow false lupine (Thermopsis), Mimosa, Acacia, sweet peas (Lathyrus), and of course clover, vetch, alfafa, peas and beans. 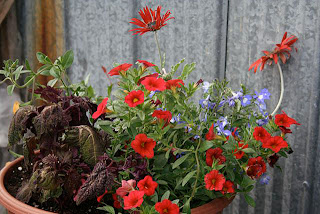 I've sung the praises of this African daisy, Venidium/venidio, in previous posts; it flowered until mid-November when one of those snow dumps put an end to its career. The other plant is a million bells, or Callibrachoa. I don't care for petunias, but I LOVE callies! 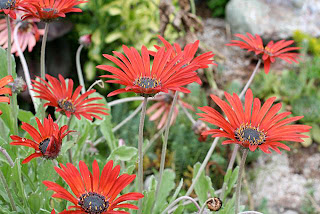 And here's a reprise look at the red flowered Venidium. It fascinates me that this flowering annual, similar to Osteospermums and Mesembryanthemum, keep going until well into autumn, long after other annuals have packed it on for the year. One of these days, I hope to go to Namaqualand in Africa and photograph the wildflowers in bloom. Meanwhile, I'll enjoy growing them at home. 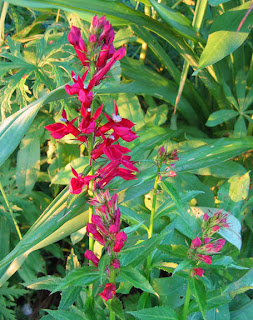 I had a couple of unsuccessful sessions with red-flowered lobelias until a couple of years back, when I planted a new one in the part of the garden that has the best drainage. Since then, it has done very well, and of course its colour is a real draw to hummingbirds. 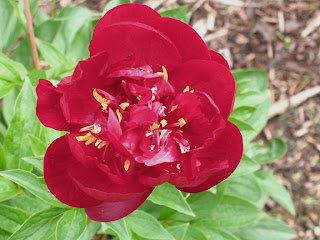 An old-fashioned peony, probably Rubra Plena, with wonderful fragrance and great flowering ability. Our peonies range in colour from white to soft pink through to the deep magenta/red forms. 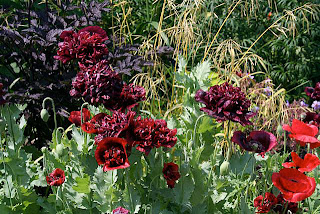 Yes, I know I've mentioned and shown photos of poppies time and again. But really, how could anyone resist these freerange flowers when they simply selfseed and flower wherever they feel like it?