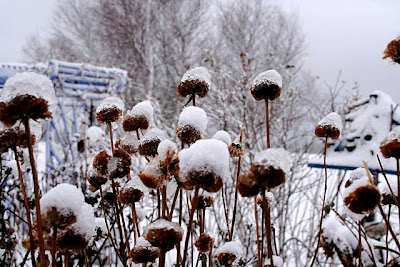 Well, like many other people in various parts of Canada and the US, we've had a bit of weather over the past day or so...we're down to just a few of those flurries now, but it's been entertaining by times. Here we got around ten inches of heavy, wet snow, which has festooned just about everything, including these monarda flower heads. 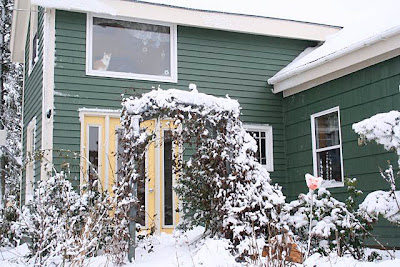 Naturally, I had to go outside and have a look around the yard; the snow is heavy on the branches of evergreens and plants foolish enough not to have let go their leaves, like the clematis on this arbour, but nothing is frozen real hard and the plants are still in their elastic phase. Tonight the wind has shifted and snow is coming off some plants. (Notice Mungus looking tragically out the upper window at me?) 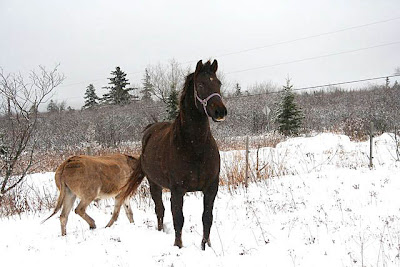 While I was wandering around the yard, my better half plowed out the dooryard and also a path to the paddock, where he put Leggo and Jenny. Having been cooped up in their stalls for all of 20 hours, they were ready to stretch their legs, especially the big guy, who wanted me to come play with him. How could I resist such an invitation? 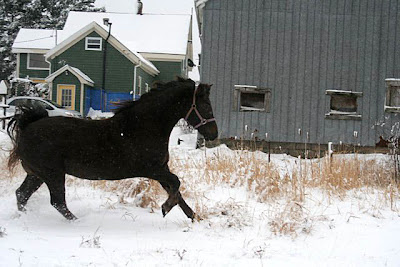 If you click on these images to enlarge them, you'll see that the ear closest to me is lopped towards me; he might be running exuberantly around the paddock, but he's still listening to me; paying attention to what I'm doing, in case I ask him to do something different, like switch directions or stop. 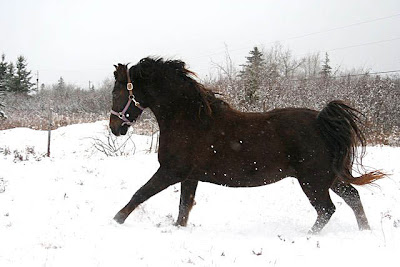 You can see that he doesn't much enjoy romping in the snow...he's like a thousand-pound child, I always say! 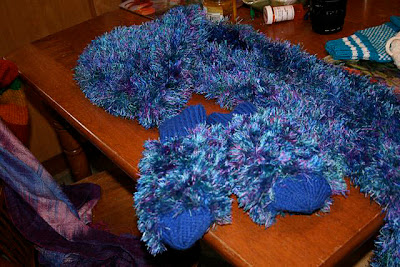 Of course, being out in the elements requires being properly (ie warmly) dressed; being warmly dressed doesn't mean that we can't have fun with winter clothings. I'm very partial to brightly coloured hats, scarves, mitts and gloves, the theory being that they help to chase away any lurking dullness in the day. And there's often a story or two behind the ones I like. This set is hand knit by a woman who sells her stuff through a tiny store in my community, which is run by a young man with severe disabilities. You can't see the pattern in the mittens because of the long pelt of the yarn, but they're Nfld knit mittens, with a unique pattern that gives them extra warmth. You can see samples (and pattern) for the mitts on this Atlantic knitter's blog; I don't knit mitts myself, but these are my favourites ever! 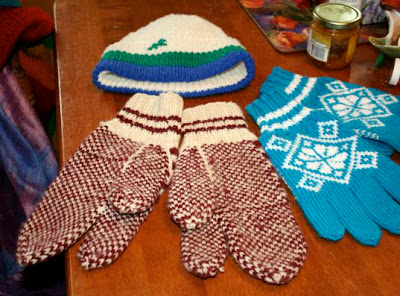 While I was in Labrador in September, I bought a number of knitted things, including socks, gloves, and fishermen's mitts, which are the wine-and-cream ones in this photo. They have a separate finger and thumb, so they're like a cross between gloves and mitts; this makes them handy for using when fishing, especially when knit of wool, like these are. The hat is knit in the colours of the Labrador flag; not surprisingly, the blue is for the ocean, the green for the forests and barrens, and the white...for the snow! 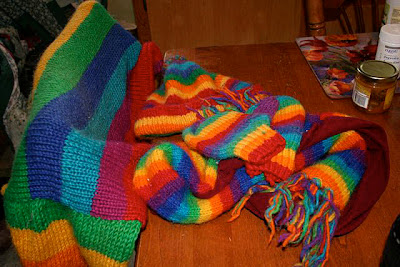 Do not adjust your monitor! I LOVE this set, which includes a sweater, although one of my other half's cousins told me I look like a roll of lifesavers when I wear these out walking. On the other hand, people aren't going to mistake me for a deer, a snowbank, or a tree, hopefully. These were also handknit, but i don't know the story behind them other than they are rainbows and rainbows make me extremely happy. 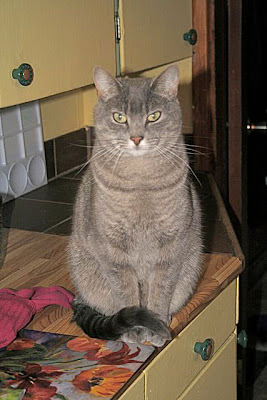 Simon Q, while he enjoys laying on anything wool and warm, advises that it's always nice to have a long fur tail to wrap around one's feet to help keep one warm. 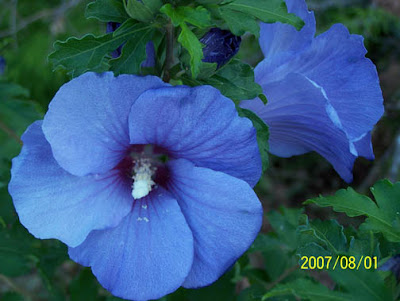 And as a late offering in the blue flower festival, this delightful photo taken by my sister of her blue hibiscus; I don't remember if this is Blue Bird or not, but it's certainly blue and beautiful. Seemed like a good way to round out this pot pourri of photos and thoughts, to dream of gardens past and future. Nice shot, sis!