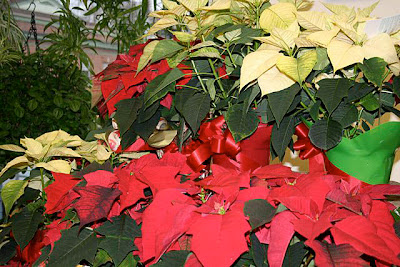 It's always dangerous for me to walk into local nurseries at this time of year. Not only am I highly susceptible to purchasing presents for family, I might succumb to bringing home something for our home. Today, I just HAPPENED to walk into Blomidon Nurseries just after they'd taken delivery of a shipment of poinsettias in a range of sizes and colours. 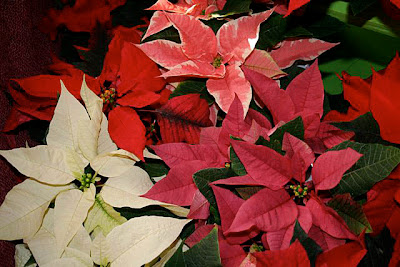 Natural colours, that is, through hybridizing, not through spray painting, watering in food colouring, or other demented mangling of these wonderful plants. I had a screaming good tantrum about the travesty of blue poinsettias last year, so I won't trouble you with a repeat performance...although I did manage to get in a shot at them (and black decorations) in my most recent column on plants in the Halifax Herald. (Note that the Herald only keeps articles up for a week, so that particular story will only be up until Saturday night.)
I'll happily embrace poinsettias in most colours that breeders are coming up with, including the bicolour ones, those that are spangled and splashed with a contrasting colour, and those that are more burgundy or even violet than red. But not blue, not when it's as garish as the ones I have seen both in bigbox stores and online. 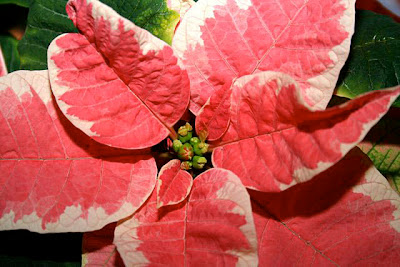 Okay, enough grumbling, and on with the plant discussion. Poinsettias are euphorbias, and regular readers of bloomingwriter may well remember that I get downright euphoric over euphorbias of all kinds. These natives of Central America and Mexico are perennial and bushy in their native habitat, and also for many in the US with kinder, gentler hardiness zones than we have in most of Canada. Their name comes from an American ambassador to Mexico, Joel Poinsett, in the early 19th century. What we consider flower petals are actually colourful, modified leaves called bracts. (Other euphorbias also have insignificant flowers surrounded by bracts, as do plants such as hellebores.) 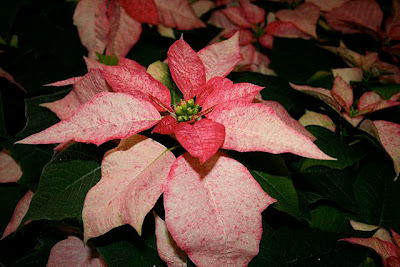 Millions of poinsettias are sold each year--more than 65 million in the US alone--but most of us tend to treat the plants as annuals, disposing of them in midwinter and purchasing new plants the following Christmas season. I confess to being in that department, only because I haven't the space to nurture a whole host of extra plants in winter. (the windows are full as it is.) I haven't bought any large plants yet; what I did today was bring home four different coloured cultivars in four separate pots; small plants, easy to arrange on steps or tabletops or in other areas where you want a small, festive burst of colour. I'll bring home several larger plants (in 8 inch pots) in another week or so, after I get the housecleaning out of the way in preparation for Christmas decorating. 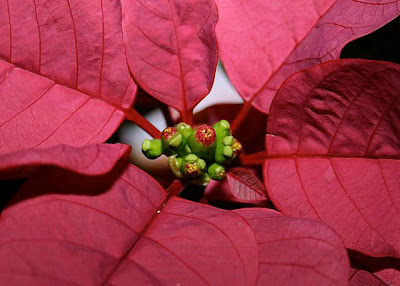 A couple of things to remember about poinsettias: choose plants that don't have their flowers yet opened. Those tiny flowers should be closed with only a bit of colour showing, not fully open. They like bright light but not direct sunlight, and not too hot a temperature, which is why they do well at our home, which is quite cool except for the kitchen. Avoid placing the plants in hot windows, or in areas where they will get either cold or warm drafts. It makes me completely NUTS to go into a department store and find a big display of poinsettias by the front door--getting bathed in cold air everytime an eager shopper enters. While the plants require regular watering, they don't want to stand in saucers of water and saturated soil. Allow them to dry out between waterings, but not to the point where the plant is wilting and gasping for water. They don't need to be fertilized while they're in bloom.

Poinsettias get a bit of a bad rep for being toxic, because like many of their relatives, they exude a white, milky sap. While this sap can irritate the eyes or skin, current research indicates that there has never been a death caused by injesting a poinsettia. Animals can exhibit vomiting or diarrhea if they've dined on the plants, so you should put your plants out of reach of naughty noses or paddypaws. Our experience has been that we've only once had a cat get sick from eating poinsettias--and we're not sure that was what she ate. She's still with us and doing fine, years later. The cat children seem to prefer trying to dine on my Ophiopogon (Black Mondo Grass) or Phormium (New Zealand Flax) or those roses my better half gave me last week. (they're also still doing fine. )

If you're really concerned about a pet--or a young child--snacking on poinsettias, you can always go the artificial route. In recent years 'silk' poinsettias and other flowers have become so lifelike that it's hard to tell the difference until you touch one. And you can have fun with decorating with silk flowers on curtains, wreaths across doorways and other places where you can't put a real one and expect it to do well. 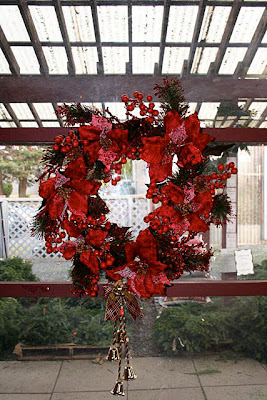