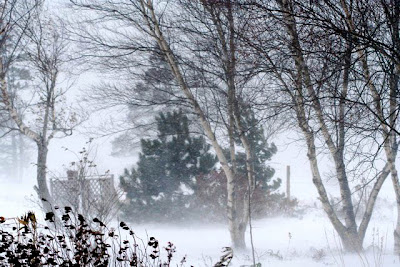 AS I intimated in my last post, to celebrate December’s arrival, the weather here yesterday had a little test run of what meteorologists are saying is going to be the coldest winter in at least a decade. First, the wind got the bit in its teeth, and got down to blowing in earnest.

Then to add to the several inches that fell sometime overnight, we started having “flurries where winds blow onshore.” Winds blowing up the Bay of Fundy whip up a frenzy of flurries, and dump them across the top of the North Mountain. One minute, you can see down the bay to Isle aux Hautes (the one in the upper Bay, not the one off Maine). Next minute, you can scarcely see across the road. Or anywhere else. 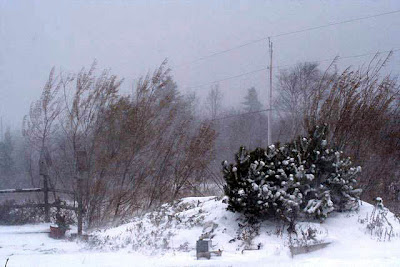 Being the intrepid gardener, writer and photographer that I am, I got togged up in some winter warmies and ventured forth into the elements. And man…the elements were COLD! The wind has definitely got its December bite, or as my longsuffering spouse calls it, it’s a lazy wind; it goes right through, rather than around, a person.

Now, I don’t mind snow; once I get the Blizzacks on my Yaris, I can deal with driving; if it’s real snotty and I have to get out, I take our Tacoma 4x4. Snow is lovely to look at with all the shapes and shadows that can be photographed. It insulates the sleeping gardening, and when it melts, it adds water to the soil. Sometimes that’s a bad thing, when one has cold soggy clay, but we manage to deal with it. 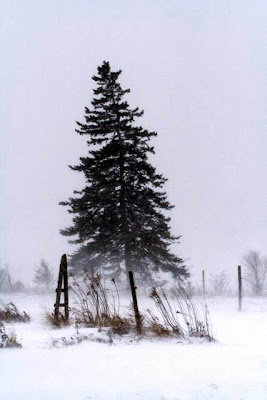 Winters here have been erratic of late, with a lot of temperature fluctuations, sometimes lots of snow and other times none, although we can almost always guarantee we’ll have a few inches of those ‘flurries’ piled up around the yard from Jan-March (and sometimes into April, which is why my exasperation with hellebores continues. )

The most impressive snow we’ve had come down all at once (in recenhttp://www2.blogger.com/img/gl.link.gift years, anyway) was White Juan, which came in February, 2004. Parts of our province had endured the wrath of Hurricane Juan in late September of 2003, (I was at sea with the Coast Guard) and so some meteorological wag dubbed the big snowstorm “white Juan”. Here’s a little info about that event, from Environment Canada:

"White Juan" - February 18 - 19th, 2004
With the experience of Hurricane Juan still fresh in people's minds, Nova Scotians endured yet another exceptional storm on February 18th and 19th, 2004 - a storm that many dubbed "White Juan". On February 18th, a low pressure system developed off the eastern seaboard of the United States and intensified rapidly as it tracked northeastward. By the morning of February 19th, with the storm located south of the Maritimes, heavy snow and strong winds had spread to all areas of Nova Scotia, Prince Edward Island and southeast New Brunswick.

A province-wide State of Emergency was declared in Nova Scotia and the Halifax Regional Municipality imposed traffic curfews as the massive snowfall paralyzed the region. Businesses and schools were forced to close as many roads would not be cleared for days. Some flooding was also reported in parts of Prince Edward Island and southeast New Brunswick as very strong northerly winds produced a significant storm surge. By February 20th, the storm had left behind a large swath of snowfall accumulations in the range of 50 to 70 cm, with a few pockets of 80 cm or more. Canadian Forces Base Shearwater recorded a whopping 95 cm of snow during this event. Winds during the height of the storm were generally in the 60 to 80 km/h range with gusts near 120 km/h in exposed areas. The wind and heavy snow combined to produce near zero visibilities and caused huge snow drifts. "White Juan" was a storm that will not soon be forgotten. 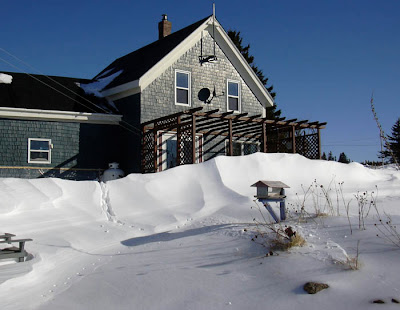 Up here on the mountain, where ‘flurries where winds blow onshore” can easily and quickly accumulate to a foot or more of the white stuff, we didn’t think much of White Juan at first. Except that it started on Thursday morning, and by mid-afternoon, I knew I wouldn’t be going to Toronto the next day! It was an impressive snowstorm, mostly because it all came down so fast, in a matter of hours. Of course, those of us who are rural dwellers know how to deal with cranky weather and are prepared for it. In Halifax, the whining was incessant for days because snow wasn't instantly cleared away...I was surprised that the mayor of the city didn't call in the troops like the Toronto mayor did one time after a snowfall. It's winter, it's Atlantic Canada. We just need to suck it up and deal with it. Which we did. 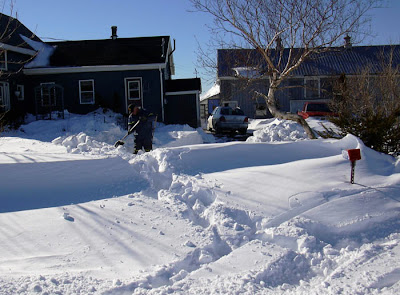 Friday dawned clear and lovely, and we assessed the situation. The power never went out during all this wind and snow, (kudos to Nova Scotia Power on that) but the road had been impassable since early evening the night before, when Highways pulled the plows off the road. However, they punched a lane down through our road around noon on Friday, and farmers and others with plows or tractors were doing ‘plowing triage’ around the area, cleaning up driveways, roads, streets…it was an interesting weekend.

So this little blow is nothing,merely a whisper of what might come over the next few months. A few good weather tantrums are actually quite enjoyable, if we're prepared for them. A warm woodstove, batteries and propane lanterns in case of power outages, good books and hot chocolate...and garden dreaming, of course! 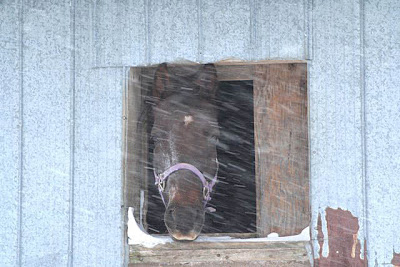 Yesterday, not surprisingly Leggo was quite content to stay in his condo-stall (he has a BIG stall in the barn) and peek out at me, though he had half-closed his window. Even Mungus, the classic escape cat, wanted to come in after about five minutes romping around the yard. A gust of wind flattened his ears to his head and he began wailing, wanting me to come rescue him. He managed to console himself for the rest of the afternoon by watching bird television out the window, making speeches to the birds that sound like Jimmy Durante (a cha cha cha cha!) 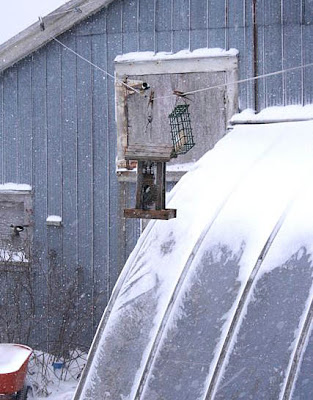 After the snits of yesterday, today we have sunlight (and wind, of course) and while it's cold with the threat of more snow, tings are bright and clean looking and it's all okay with me. Of course, the question remains, WHEN will I get the rest of my bulbs into the ground??? We should make a lottery of it!