Tis the season for 'top ten lists' of hits and misses, plans and prognostications. Since I don't make New Year's Resolutions, (because they just set us up for failure) I thought I'd do a few lists; of my personal top ten favourite trees, shrubs, perennials and annuals. Let's start out with the biggest and most impressive--trees. 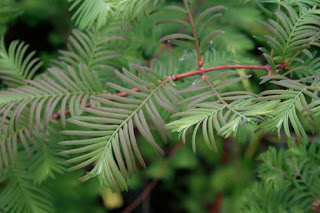 Dawn redwood Metasequoia glyptostroboides: This is one of those fascinating trees that have become popular in recent years. Long thought to be extinct, it was ‘rediscovered’ in the early 1940s in China, and now is a much cherished ornamental tree in many home gardens and arboreta. It’s one of those rare deciduous conifers; similar to the larch, it drops its needles in autumn. New growth is a soft bronzy-green, the growth habit flowing and sweeping, and the bark peels attractively. What’s not to love? 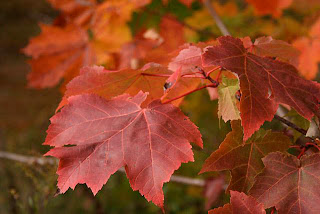 Red maple Acer rubrum. Everything about this native tree is delightful; one of the first trees to flower in spring, it’s well named because its flowers, twigs, seeds, and petioles are all tinted red. Of course, its red foliage in autumn is marvelously electric, in shades that are difficult to describe. Not to be confused with the tiresome, and non-native, ‘Crimson King’ Norway maple. It’s true that I have a hate on for Norway maples (Acer platanoides) of all sorts, because they’re just not great trees, are subject to tarspot fungus, spread far too quickly, and are used by lazy landscapers and city planners far, far too often. Whoops, that was a slight rant, wasn’t it? 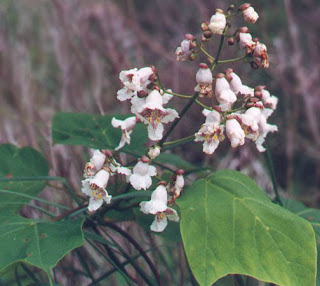 Catalpa or bean tree Catalpa bignonioides. I took a leap of faith this past summer and planted a catalpa, because while they can be a bit iffy in our zone, they are just such wonderful, graceful trees. Their flowers attract butterflies and hummingbirds; and now, in winter, their long, slender seed pods, that do resemble string beans, cling to the branches, providing great winter interest. 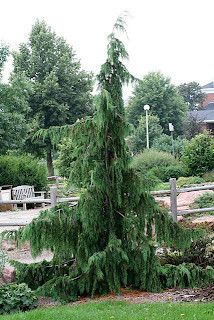 Weeping Nootka falsecypress. Chamaecyparis nootkatensis. I’ve seen this plant recommended for use in hedges, which I can’t imagine; to me, it’s a perfect specimen tree. One of my gardening friends has one that’s about twenty five feet tall, and it’s one of the most lovely trees I’ve ever seen. Its cones are attractive and unique, too; taking two years to mature, they’re curious little 4-scaled structures. Just to make things interesting, the botanical name of this tree has been moved to Callitropsis, but many still refer to it as a Chamaecyparis. I actually have C.n. 'glauca', which is the blue-foliaged form. 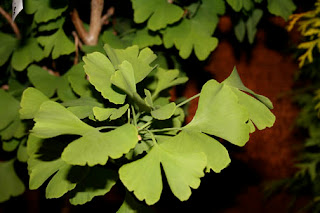 Ginkgo or maidenhair tree Ginkgo biloba. I like having living fossils in our garden, which is why we have a small bristlecone pine (life expectancy, 4000 years), a dawn redwood, as mentioned above, and a ginkgo. I look at my small ginkgo, and imagine it growing 270 million years ago, when dinosaurs roamed the earth; that’s longevity! The common name of maidenhair tree comes from the fact that the leaves (somewhat) resemble the leaves of the maidenhair fern, although the two are not related. 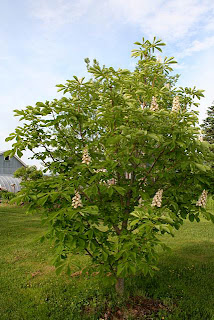 Horse chestnut Aesculus hippocastanum. This is the favourite tree of my longsuffering spouse, who planted several with his grandfather decades ago on the home property. When we bought our property, I gave him a 4 foot tall horsechestnut; nearly nine years later, it’s growing into a fine tree and flowered last spring for the first time. 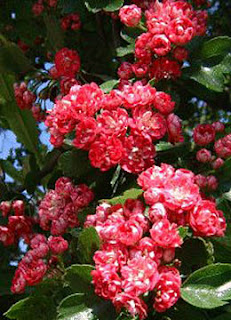 Paul’s Scarlet Hawthorne Crataegus 'Paul's Scarlet'. I love the wild hawthorns that naturalize around our province, in part because they’re beautiful, in part because they provide food and shelter for many different speces of birds. This particular hybrid appeals to me because it forms a nicely sized, but not overbearing, tree; about 25 feet tall at maturity. Ours has only been planted for a couple of years but it flowered for the first time this past summer; just a couple of sprays, but those rich carmine flowers get to me every time! 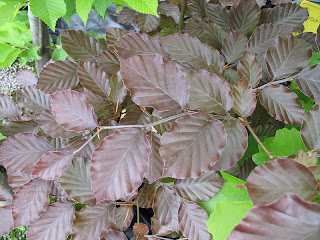 European Copper beech Fagus sylvatica Purpurea Group. Beeches are handsome trees with lovely smooth bark, and attractive foliage. There are numerous ornamental varieties, but my favourite is the purple, or copper beech, with purple foliage that sometimes looks coppery. A friend of mine has a weeping purple beech, but I’m content with the regular form. Recently, however, I’ve been tempted greatly by the tricolour beech, although it’s very pricy. 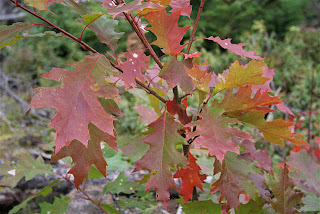 Red oak Quercus borealis or Q. rubra Another native tree, and one that is not for impatient gardeners. Its life expectancy can be up to 250 years, but it doesn’t take that long to get some size; they grow fairly quickly, which is good, because I just planted one this past summer, and want it to hurry up! The red oak, like the red maple, has fantastic fall colour, and I’ve noticed that many trees locally are still holding quite a few of their leaves, now a handsome bronzy colour. 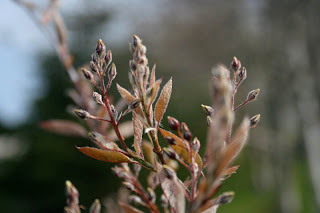 Shadbush, Chuckly-pear Amelanchier, various species. As a child, I knew this as Indian pear or chuckleberries back in Newfoundland, and learned just how delicious the seedy fruit are. One of the earliest-flowering trees in spring, new foliage is a soft bronzed green, and the snowy white flowers contrast nicely. Berries are much loved by birds, and fall foliage colour is brilliant crimson. While there's currently just one tree in the butterfly garden, next spring I intend to add some Amelanchier to the native areas of our acreage, along the edges of the pasture; there's always room for more trees.

Yes, trees can be slow to grow, but you know the old saying. "The best time to plant a tree is twenty years ago; the second est time is today!"