Be warned: this is a bit of a rant.

I thought my friend Alice was joking when she told me she had seen blue poinsettias in wallyworld, the bigbox bully that is trying to decimate small town Canada, having already pillaged small town America.

Blue poinsettias? Oh, she must mean silk ones. I’d already seen tacky black artificial poinsettias, to go along with the incredibly ugly black and white Christmas décor that someone deemed trendy for this year. More on that later.

But no, her email seemed to indicate REAL plants.

So, ever the intrepid gardener in search of the real dirt on such things, I girded up my loins, sallied forth into the commercial wilderness that is between Kentville and Wolfville, and waded into the throngs of unwashed masses eager to spend their last dollar on plastic junk from Wallyworld. (Why IS it so many people don’t bother to shower, wash, or use deoderant—and then go out in public?)

And there they were. Not only blue poinsettias, but a sickly mauve coloured crop too. Most of them half wilted, obviously traumatized by having been offloaded in a chill gale of Nova Scotia wind before being stuffed into a lightless, airless, overheated department store.

Oh, my. Are we approaching botanical Armageddon?

They’re absolutely hideous. Well, that’s my opinion. Apparently there are people who think these are the next best thing to wonderbread. Why, is beyond me. These aren’t genuine, genetically blue flowers; they’re dyed with some sort of floral dye to give them the colour. And not just available in blue, oh no. You can get gold, (for the harvest season, no doubt) lilac, fuchsia, green, and gawdknows how many other colours. Hey, probably even BLACK for the goth celebrants.

Now, I am a fan of new colours in plants when it’s due to breeding, crossbreeding, and so on. After all, who more than me loves the new echinaceas, or searches for the deepest purple or most brilliant gold foliage in shrubs and perennials? And I have loved the new advances in poinsettia colours; the deeper burgundies, the bicolours and marbles, the lemon-chiffon, the variegated leaves…

But these blue and other-hued poinsettias look ghastly; especially so when some benighted floral ‘designer’ decides to tart them up further with glitter or iridescent spangles. Doesn’t this look like something out of a dollar store clearance bin? 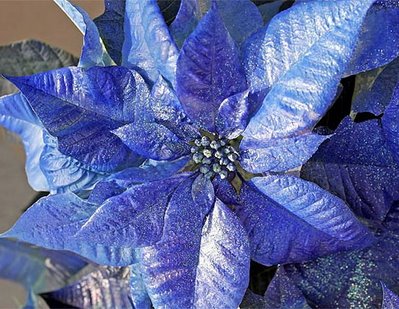 Okay, maybe I’m being harsh. Chacun on son gout, we all say. Fair enough; if someone wants a blue poinsettia, they can fill their boots.

But wait, there’s more. These blue poinsettias in a bigbox store in a Nova Scotian town—they were at least grown in Nova Scotia, right?

Wrongo. They are labeled “Product of Ohio.” Talk about pouring salt into the wounds. We have a fantastic nursery here in the province that grows huge numbers of poinsettias. That wholesales to all kinds of other nurseries and stores. And yet wallyworld buys its from an Excited State and hauls them up here to die in Nova Scotia?

Steady, jodi, steady. Deep breaths, girl. On to something else while I’m in my grinch-like mode.

What braintrust decided that we needed BLACK Christmas decorations? I don’t mean décor celebrating African heritage. I mean the colour black. Black ornaments. Black silk flowers—including, surprise surprise, poinsettias. Black table runners, swags, tinsels, probably even lights? Even black Christmas TREES! (Artificial, thankfully, so far—no sprayed balsam fir or scotch pine trees to be found so far…) It seems to have been a European trend which some designer-diva decided needed to be imported across the ocean to sully our shores. Paired with white, of course, for the tres chic, avante garde look. Oooh, lah lah. Pass me my glass of black champagne, darling, while I deck the halls with black holly with white berries.

Oh please. I was willing to go with the introduction of copper, bronze, purple, turquoise into the Christmas colour palette, though some of the more neon colours make me cringe. I saw a tree decorated in peacock colours that appealed to me as a curio, but not as something I’d want sitting in my living room for two weeks.

But black? The only things black and white I want to see at Christmas is licorice allsorts, and penguin-themed items like calendars and coffee mugs. Not ornaments, not trees, and definitely not poinsettias.