The ritual of bulbs 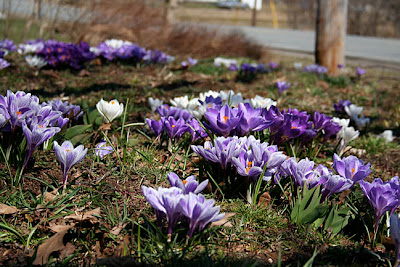 It was one of those perfect autumn days here in beautiful upper Scotts Bay, Nova Scotia. The wind wasn't blowing excessively and the sun was warm, and it seemed like a good time to go outside and putter in the garden a bit. My puttering included cutting off stalks of some perennials and spent annuals, pulling some weeds, planting my Blue Nootka false cypress, and getting ready to plant bulbs.

I'm not quite as hard-core a bulb-buyer as some of my blogging comrades, but usually I end up putting in a couple of hundred bulbs of various species and varieties. They are, after all, a true blessing when they start to emerge in spring. We're just about at the end of our tethers, having dealt with snow or rain and other nasties, cold weather, dreary weather, short days and long nights, defrosting cars, icy roads, no flowering things outdoors...and then suddenly, one day we look out and there's a crocus or a snowdrop or an aconite popping up. And suddenly, we realize that we're going to make it through the winter after all. 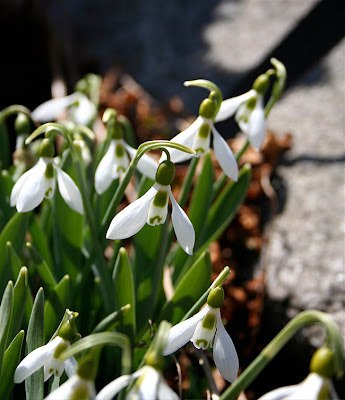 Because we have some drainage issues in much of the garden, I haven't had any success in the past with winter aconite. Thus the first bulbs to come calling in our garden are the graceful, cheery snowdrops. Maybe they aren't all that colourful, being snow-white with those little chevrons of green. But they're alive and flourishing and so welcome; and seeing them, I know that others will follow. 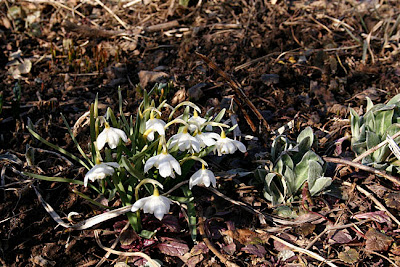 Snowdrops are slow to multiply in our gardens, perhaps because I've inadvertantly dug them up by accident. The doubles are doing well, though they were a bit overwhelmed by having a big dump of snow land on them this spring just after they got up and started blooming in earnest. I'm told they're fragrant, but I never pick them and never get my nose down that close to the ground to check this for sure.
In the book Dear Friend and Gardener, letters written between Beth Chatto and Christopher Lloyd, our two correspondents are regularly waxing eloquent about various species and cultivars of snowdrops. When I first read this book I was surprised at the varieties they talked about, because here, I think we can get two types: single and double. But in England, and perhaps elsewhere, there are many more choices. There was an article this spring, I think in Horticulture magazine, about snowdrops, and I did appreciate some of the subtle differences. That's one of the things I like about snowdrops, their subtle and graceful nature. 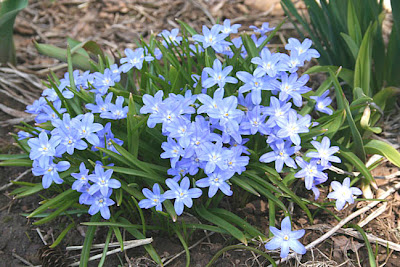 These little beauties are well named, being called Glory-of-the-snow (Chionodoxa). We need to plant more of them because they are only along the southern side of the house, and I love their china blue flowers facing skyward. I have some of the pink cultivar as well, and while they're pleasant, they don't do it for me like the true-blues do. Over a period of time, they have colonized and are making a nice wash of colour, but I don't often see them at local nurseries, and since I haven't ordered bulbs by mail for some years, I have to take what I can get locally.

I refer to these sorts of bulbs as 'small wonders.' They aren't huge or flashy, but rather quiet punctuations of colour nestled close to the ground. They're easy to put in using a dibber, of which I have several models. One I particularly like handmade, turned hardwood that was beautifully sanded and polished, then stained and varnished. It's almost too lovely to use in the garden, but it has been used as a model in various photographs. Another is wooden with a steel tip, ideal for poking through grass so that we'll have a flurry of flowers in the lawn before it greens. But if you do naturalize with bulbs in your lawn, remember you have to avoid mowing the grass for a few weeks after the bulbs are past, to allow the foliage time to ripen, which creates food for next year's blooms. 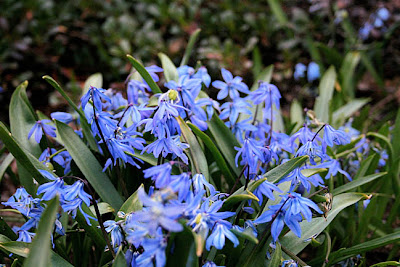 Whether you call these scilla or squill, they are great for satisfying that craving for blue flowers that so many of us have. Where the glory-of-the-snow turn their faces to the sun, scilla are more shy, with nodding flowers in a deeper shade of blue, I'd call it gentian, myself. These also naturalize, and you often see them planted together with various yellow daffodils or narcissus, which makes a nice contrast. 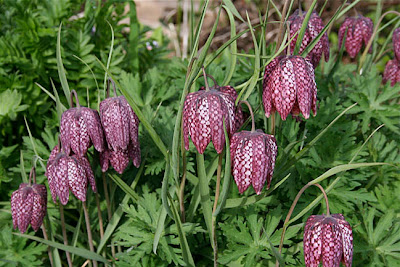 One of my favourite springflowering bulbs is the checkered fritillary, also sometimes called snakeshead lily (Fritillaria meleagris). These have always delighted me because of the unique checkered pattern in their flowers, (except in the white ones which are just plain snowy white but also delightful. I have to call them checkered rather than snakeshead as my longsuffering spouse has an intense dislike of snakes and doesn't even like to hear a plant called by that description. Besides, they're far too pretty to be named after a reptile (even though *I* like snakes just fine!) 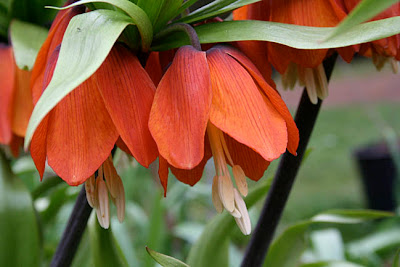 This photo was taken at a friend's garden, as I only planted Crown Imperial Fritillaria once; it flowered the first year but didn't return, and I haven't gotten around to finding a better place for it. But I so love the rich green foliage and those brilliant scarlet-orange flowers, so this tells me I have to smarten up and try planting a few of them in the area that's being turned into a rock garden--it has the best drainage, and also gets good sun but shelter. Now of course, can I find bulbs this late in the game, that's the next question? 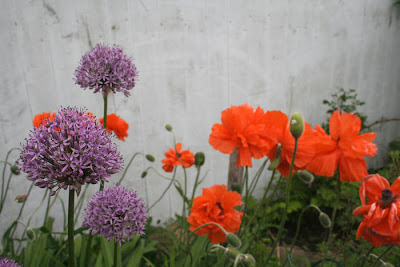 Do you plant alliums? I find they're very much underutilized, and that's a great pity because they're so expressively unique, with a whole range of flower colours from green to purple to pure white to true blue. I'm putting in a pile of Allium cristophii (Star of Persia) as well as additional Sicilian honeybells (Nectaroscordum siculum) and some giant purple alliums, and whatever else I find when I go back to the nursery for more bulbs. 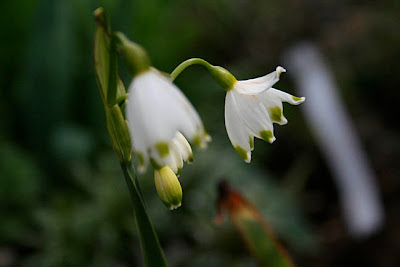 Leocojum, or snowflake, come in several types; this is the late-spring flowering variety, and I like them as much as I do snowdrops, perhaps because they do remind me of snowdrops but are much larger and come at a different time. More are going in this fall because I only planted a few maybe three or four years ago, and I think several have been lost by overzealous gardeners mistaking them for grass. It happens, sometimes. I've done that with alliums in the past too. Oh well, to garden is to err, and to err is to be human...isn't that how the saying goes? 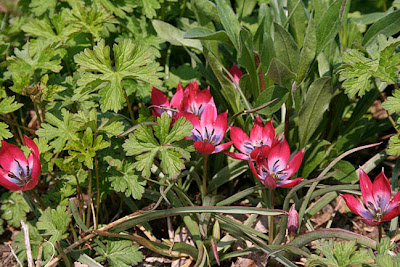 Now we're going from the subtle spring stalwarts to the brash, brilliant and jubilation-inducing colours of the tulips. For the most part, I treat tulips as annuals, adding new ones each fall. Triumph and Darwin tulips will come back for me, and sometimes the Fosterianas will too, but others tend to dwindle away rather quickly. Species tulips also do just fine for me, providing I remember where they're planted and don't go trying to put something new in the same spot. We have a nice large clump of T. tarda, but also some T. batalini and other species, and this little darling, T. hageri 'Little Beauty.' And isn't it a beauty? 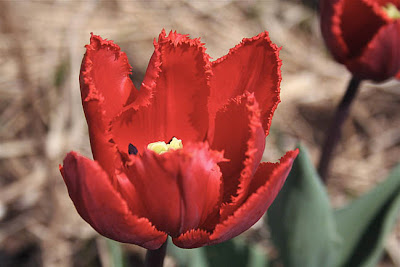 Fringed tulips are delightfully different, and I plan to repeat planting them, preferably in a rich colour like this. I'm not a fan of yellow, white or other pastel tulips, at least not in our garden--I like them fine in other places, and for sure they're marvelous planted out in huge drifts like they do in Ottawa during the tulip festival in May. That festival, very well known in Canada as well as other parts of the world, celebrates the long friendship between the Netherlands and Canada. During WWII, several members of the Dutch Royal family took shelter in Canada for several years. Princess Juliana gave birth to a daughter while in Ottawa, and the maternity ward in the hospital was temporarily declared Dutch territory so that the child could be said to have been born in Dutch territory. After the war was over, the government of the Netherlands sent 100,000 tulips to Ottawa as a gesture of appreciation, and that was the start of the yearly tulip festival. What a great way to celebrate a friendship between two countries. I think of that every time I put a tulip in the ground. 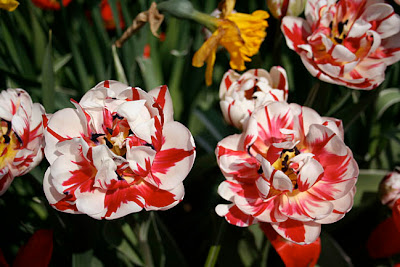 This is Carnival of Nice, a nice enough tulip, although I often see it planted with Monsella, a red-and-yellow double which doesn't do it for me. I like Carnival, but putting it with Monsella wouldn't be my prime choice for colour combinations, because I see too many gardens with red and yellow tulips lined up like little soldiers, and that's one of those gardening peeves that might work for some but isn't going to happen in our garden. However, this on its own is very striking, and would also work nicely with a deep wine or red or pure white tulip. Or whatever else makes you happy, right? 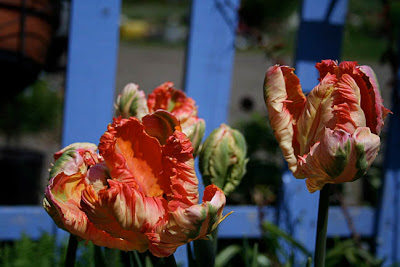 Now, THIS is my idea of a perfectly exciting, jubilant, exquisite tulip. It's Apricot parrot, and I first saw it at Ouestville Perennials several years ago. It was love at first sight, too. Last year I put in a dozen of these glorious bulbs, and they put on a marvelous show this spring. I especially like how the apricot colour changes to a rose as the flower ages, and the petals look like the dress of a flamenco dancer. Absolutely perfect.

What am I putting in for tulips this year? The elegant green-on-green viridiflora, Deirdre; Uncle Tom, a double late tulip that is among the darkest-wine out there; Roccoco, a parrot tulip in deep rich red with greens; Greenland, another viridiflora, this one hot fuschia pink and green; and Orange Emperor, a brilliant rich Fosteriana that we have had before (and which have finally dwindled out after about five years. Now...these are the bulbs I have on hand at this time; what I'll come home with after the weekend, it's hard to say, but stay tuned for more details.