Meditating on the marvels of magenta 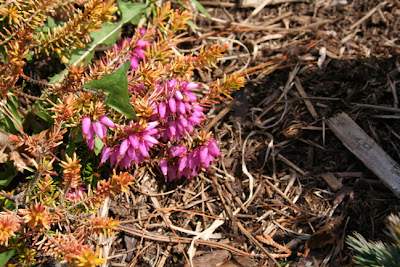 One gardener's muddy magenta is another gardener's marvelous magic, isn't it? That's one of the things I love about gardening--it can be so utterly individual and expressive of our tastes, and we get to do things in the garden that we don't do elsewhere. Get your minds out of the gutter, now...I mean with regards to playing with colour. I have no problem whatsoever in putting together lime green, magenta, orange and blue in a planting--but I wouldn't wear it or paint my walls that colour combination. (Actually, our walls are all sage green, yellow, or blue--the latter are going to be changed one of these days to different shades, but for now they are fine in bedrooms. I like colour and don't really care for neutrals, although they work really well in other people's homes.) That digression just proves how individual and varied we can be with colour.

In my previous posts exulting in purples, I also mentioned magenta, and said that it needed its own posting. It's going to get two, actually, because the more I looked, the more marvelous magenta-flowered plants I found. Magenta is technically a colour between red and purple, and it’s a primary colour in the printing model of CMYK—which stands, if you didn’t know, for Cyan, Magenta, Yellow and Black (which is called Key—I don’t know why.) Its opposite colour is green, which works well since of course most foliage of plants is green. In parapsychology, a magenta aura suggests a person is artistic and creative, while it also symbolizes anti-racism in the Netherlands, where the Magenta Foundation is based. Isn’t Wikipedia helpful? 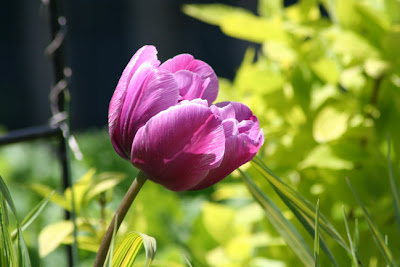 There’s one drawback to the colour—there’s not just one magenta, and like red, it doesn’t always reproduce well in digital photography because of something to do with the red sensor in the camera. So not all of the photos I’m going to use are exact in their colour reproduction, and not all the plants are the exact same shade. Some may be closer to red, others to purple—but all of them get lumped into magenta (or fuchsia) in my colour sense, and all of them make me happy. Let’s have a look at some of them.

Magenta is especially welcome in the spring, when the first colours to emerge are often pale--white snowdrops, pastel crocus, daffodils in shades of cream and yellow. One of the first plants to speak up more strongly is the heath shown at the top of this entry--it's lost its name, unfortunately, but it's a welcome sight when it begins to bloom.
I'll be writing more about tulips in an upcoming post, but I tend to plant tulips with jewel colours--fuchsia, purple, orange, green (yes, green!) and I find the magenta-fuchsia ones are some of my favourites. 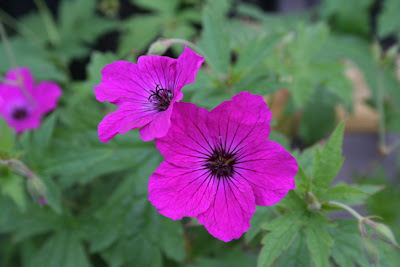 Meet the cranesbill 'Red Admiral'. It stopped me in my tracks early this summer, and I had to have it. Other magenta cranesbills in our garden include the basic Bloody cranesbill (G. sanguineum) and its cultivar Max Frei (both of which are flowering again right now. I love cranesbills for their exuberance and their floriferous, easy-care ways, but Red Admiral is going to become a favourite--a little taller (about 18 inches) than the others, and richly hued. 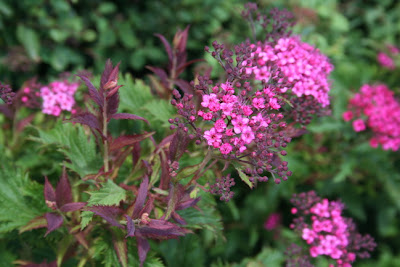 The same day as I got Red Admiral, I purchased this 'Crispa' spirea--which I like for its wonderful foliage as much as for its flowers. I'm waiting to see if it will usurp 'Tor' in the fall foliage colour category, but we still don't have a lot of change happening in our yard (no frost yet.) 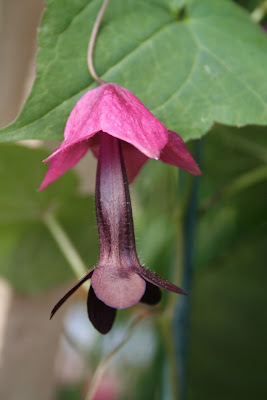 This is Rhodochiton, or Purple Bell Vine...also sometimes called by another name, and if you look carefully at that phallic centre, you can guess why. This is an excellent annual vine here, extremely floriferous all season long, and it overwinters well indoors--especially if you remember to water it regularly. Gosh, I just love annual ice plants for their shy, retiring colours--NOT! I do love them, but for the neon flash of their flowers, the more subtle central colours,and the frosted leaves that give them their name. Give them what they want for conditions--not too wet, so ours are all in containers--and they will be happy campers. Ousrs are still flowering and will continue until a hard frost causes them to surrender. 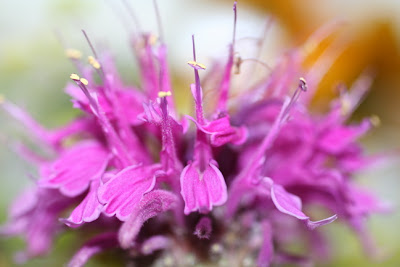 As a butterfly habitat gardener, I adore monardas of all shades, although one called Bluestocking is a bit 'muddier' in shade than this rich Raspberry wine cultivar. Although we've had a bit of mildew on some of our monarda this fall, they are still putting up some flowers, but most are slowly going to seed. 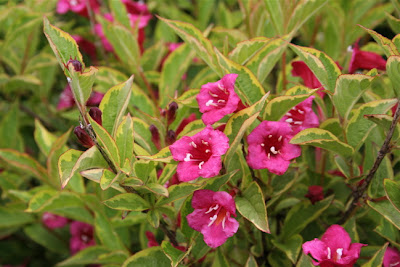 Two years ago I bought this weigela labeled as Bristol Ruby, but it's not. No one seems to know WHAT it is, but it's marvelous. It keeps that chartreuse and green foliage colour all season long, and it throws up some occasional flowers after the main flush of rich magenta blossoms are past. Most importantly, this particular shrub was a prime chrysalis location for our monarchs, as readers may remember from the postings I did on our monarch watching. So whatever weigela this is, it's a winner in my books. 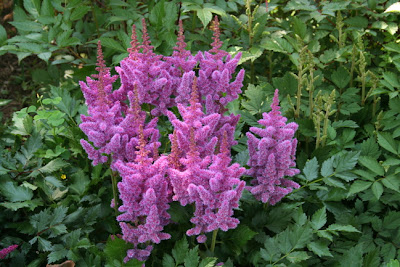 I'm a recent convert to the world of astilbes, and they are fast becoming one of my top choices for moist areas of the garden.This one MIGHT be more lavender-purple than magenta (although I don't think it's 'Amethyst') but it's beloved because the flowers are almost luminous in any light.
These are just a few of the summer-flowering magenta stars; tune in next time for those I've caught in the act of blooming this week--yes, in nearly mid-August!