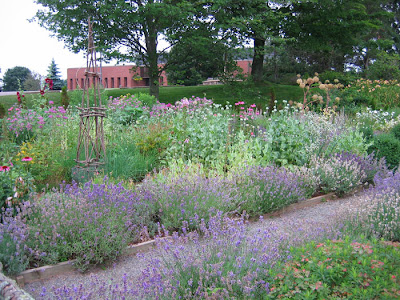 Reading fellow garden-bloggers’ recent reports of hard frosts, I expected to find a garden turning to mush when I went outside earlier today. The banshee wind that has been rattling this old house for the past few days had a definite bite to it, but it actually kept us from that killing frost. We did get some cold damage to some of the more tender annuals, but looking at them brought on no regret. It is, after all, nearly the end of October, and some of these annuals have been growing in containers here since late April. It’s time.

But there are still gifts to be found and cherished, sometimes surprising gifts. I’ve mentioned roses, delphinium, coneflowers putting on repeat performances but the best surprise was one I found this afternoon.

A single sprig of lavender in bloom, its rich colour a foil for that coolly grey-green foliage. This particular plant flowered earlier, and quite well; what possessed it to throw up this mid-autumn gift, who can really say, but it was like the smile of a sunflower. I debated only momentarily before deciding to pick it and bring it in my office; a single stem in a pewter kenzan now graces the clutter of my desk. 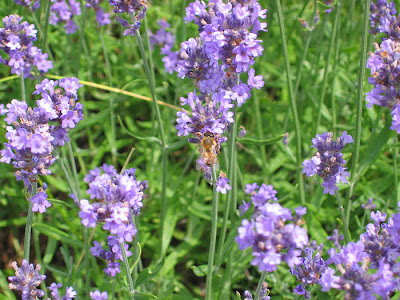 Lavender. The very name evokes a romantic, clean fragrance, a glorious burst of purple haze in the garden, memories of scented closets, lace sachets, bees drunken on nectar. I think it may be summer incarnate, although its fragrance is not the heavy richness of a rose or a heliotrope or a brugsmansia.

Lavender is an ancient herb, with natural habitat in such diverse locales as Greece, France, Morocco, Egypt and India. It’s not known what peoples first discovered the uses of the plant, but Dioscorides, a Greek physician of the first century AD, makes note of lavender in his writings. Interestingly, although we hear the term “English lavender” used by several companies, lavender is not indigenous to England, and probably was brought to that country by the invading Romans. 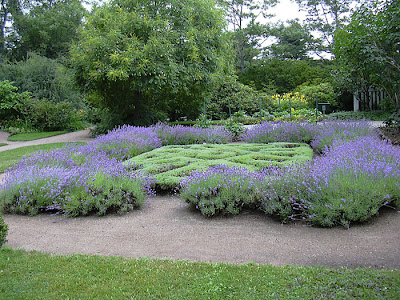 According to herbalists, the plant’s essential oils are useful for treating burns, headache, insomnia and depression, to repel insects, and as a general-purpose antiseptic. In medieval times, when personal hygiene was less important or possible than today, people often used highly scented herbs such as lavender as “strews”; stems and flowers of a plant were strewn over floors so that when they were trodden upon, their fragrance was released (and hopefully compensated somewhat for less pleasant odours!) It's often used in herbal knot gardens and topiary and other designs where some formality is desired, but works splendidly just massed in a perennial border too. 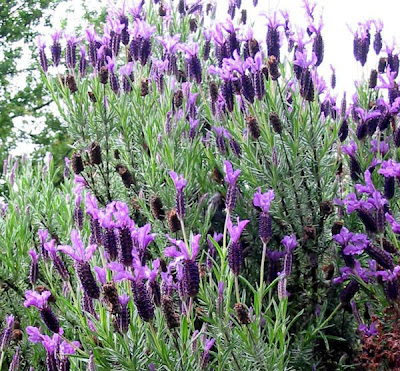 Lavender plants CAN be a bit problematic to grow, but the secret is to give them plenty of sun, good drainage, and not too fertile a soilAs with most herbs, lavender likes a poorer soil, and if you overfertilize, the plants won’t be nearly as fragrant. They hate wet feet, and cold, soggy soil through the winter months will do them in. Here in much of Atlantic Canada they can be winter-killed by lack of protective cover in the winter, but mulching them with straw, hay or evergreen boughs will help get them through. Cultivar selection is important too; here, I can grow Lavender angustifolia cultivars including Munstead, Lady, Twickle Purple and Hidcote. Others such as the fancier Spanish lavender (Lavandula stoechas ssp pedunculata) shown above are just not hardy in my part of the world unless grown in containers.

I happen to like lavender in just about any form; in soap, lotion, shampoo, or pure essential oil; in tea, seasoning, and sweets (if you’ve never had a lavender chocolate, you can’t imagine the decadence, but lavender oatcakes are equally wonderful.) Mind you, the products need to use REAL lavender and essential oil, not these hideous synthetics that you find in products from dryer sheets to dish soap to ‘aromatherapy’ hand cleaners. Give me a break. Aromatherapy is valid and fascinating, but it calls for using real essential oils, not cheap synthetics.

But in my experience the best way to cherish lavender is to have a small box, a sachet or a dish of potpourri that is nothing but pure lavender florets. I keep sachets in my office, in our bedroom, even in the car and in my shoulder bag, because I find the fragrance revives my spirits, and reminds me of warm summer days.

Which today certainly wasn’t. But summer will come again. And so will the lavender, blooming in earnest. 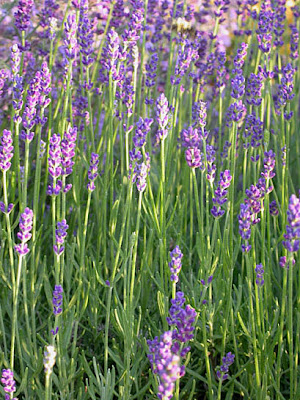 Meanwhile, however, I’ll cherish such gifts as found flowers.

What found floral surprises have delighted you in recent days?