"Every leaf a flower" 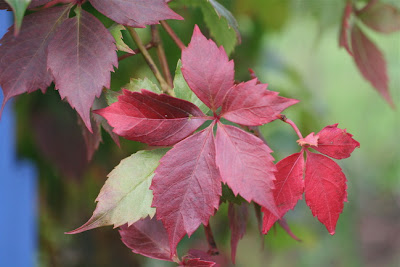 A mild, summerlike and even muggy day today prompted me to take my camera for a walk around the yard and see what's flowering a la Camus--rather than explore flowers today, we're going to look at an assortment of foliage. We have yet to have a frost here on the North Mountain, so the hardwoods aren't changing colour with any great enthusiasm; but since I plant our gardens with an eye to foliage colour and texture as well as a focus on blooms, there's always an interesting chorus of colour happening here.
Virginia creeper is an overzealous performer in some locales, but here it's easy to manage, festooning the arbour my longsuffering spouse built me several years ago. The arbour is periwinkle blue, which is a striking contrast for just about any garden colour, and the creeper is just starting to turn from green to crimson and later to deep purple. 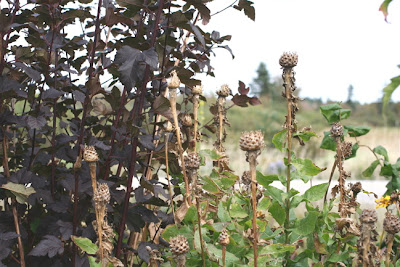 I happen to have a passion for purple, whether in foliage or flowers. This Diabolo physocarpus, or ninebark, is a favourite because it's the perfectly behaved shrub. It grows without making a fuss, and not too large. It doesn't die back in winter. Its flowers are lovely, its fruits or seedheads are interesting to look at, and its foliage is stunning all through the season. Here's its a backdrop for Centaurea macrocephalus, the large-headed yellow knapweed, also nicely going to seed. 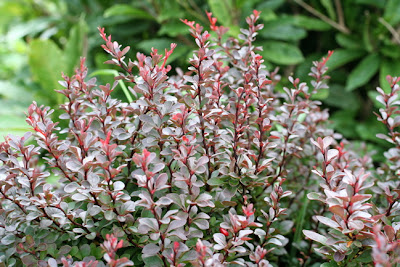 Did I mention I have a passion for purple? Also for barberries, of which I have four different species at present. We think this is simply Berberis thunbergii 'Atropurpurea' although I could be mistaken. It has a lovely globular shape, stays under two feet tall without any pruning from me, and keeps its deep dark colour all season. Because it was cloudy when I took this photo, I lightened it in iPhoto and you can't really appreciate how deeply purple it really is. But I especially like when some of its leaves have a green tinge, and when the yellow flowers appear in spring. 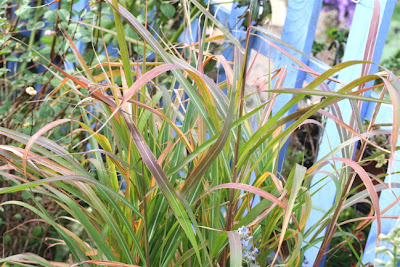 Still on the purple kick, but we've moved on to Miscanthus sinensis var. purpurescens, or Purple Japanese Silver Grass, aka Purple Flame grass. It's just now coming into its own in Scotts Bay, starting to turn some spectacular colours, and it hasn't even opened its flowerheads yet. I like this grass so much, I think I have two clumps of it (another in a different locale isn't quite as developed yet but is starting to show purple.). The flame grasses or silver grasses make me instantly happy because of their tidy growth habit and striking flowerheads, and of course they look great well into winter. 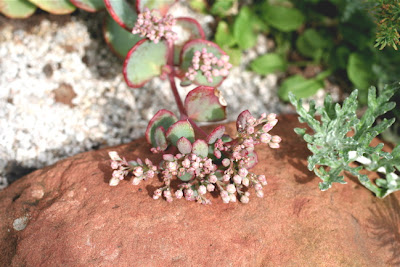 The label on this sedum was incorrectly spelled, but I believe it's S. sieboldii. I love the bluegreen foliage with its rosy pink tips, and while it's just starting to flower, I think its buds are equally attractive, especially resting on the rock beside a silver-grey leaf from a wooley sunflower. 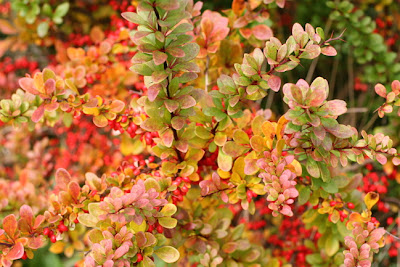 This is your basic garden variety green Japanese Barberry, surely one of the great fall foliage fireworks stars. I can't even describe half the colours in the leaves, and the shocking red berries just add to the festivities. The plant's growth habit suggests a firework explosion too. Truly a delightful plant, and it's been extremely wellbehaved--what seedlings it produced were eagerly accepted by a nursery owning friend of mine. 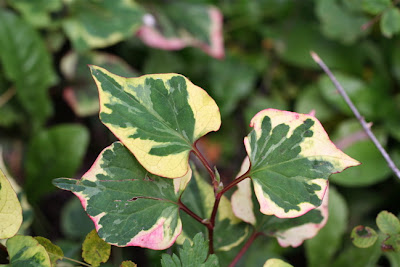 I KNOW that this plant causes some gardeners muchos problems. Here, however, it isn't likely to ever be invasive. Chameleon plant (Houttuynia cordata) turns my crank for several reasons: the heartshaped foliage in its shades of cream, red, green and yellow is not only beautiful, it's also fragrant when rubbed or crushed. The best description I've heard is that it smells like orange marmalade, which I happen to agree with. It's late emerging here, and although I finally have it returning reliably, it's not likely to ever run amok because it's so slowgrowing. In warmer climates, it's perhaps more problematic. I think in such cases it would work well in container plantings. Has anyone tried that? 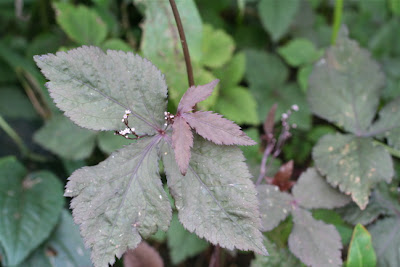 We're doin' the purple thing again! Meet Japanese Parsley, Cryptotaenia japonica, also known as Japanese Honeywort. Because I had long ago forgotten its common name (and somehow, retained Cryptotaenia in my noggin), I had also forgotten that this is an edible plant. I haven't tried it, but since it selfseeds fairly well and I have a host of young plants popping up, I'll venture sampling it in a few days when I'm finally free of my internal ailments. But obviously, since I haven't eaten it before this, I purchased the plant because I loved its rich colour and unique foliage. The flowers are miniscule, but with foliage this great who cares? 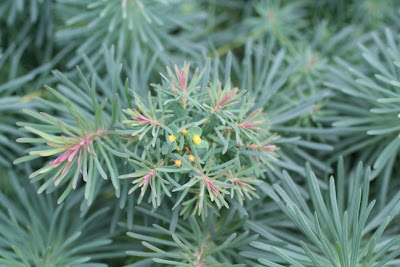 I mentioned Fen's Ruby in my earlier post extolling the virtues of Euphorbias. Today the plant decided to present me with a few new flowers and bracts, and still more new growth. I love the cool blue-green foliage and its bronze undertones, and plan to divide and move this plant to other locations come spring. 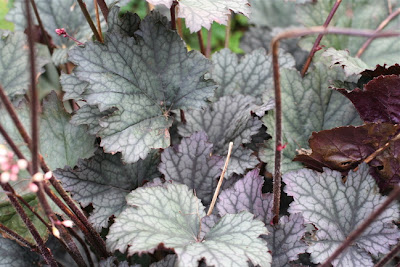 Well, what a surprise...we're back to purple foliage again! Meet Heuchera 'Frosted Violet', which to my mind is one of the best performing heucheras on the market. This plant is trying to compete with some of the hostas for impressive growth--not so much in huge leaves, but in general vigour; the plant's spread is 2 1/2 feet now, and it's still flowering, lovely spikes of creamy flowers. Although I appreciate the flowers for their attraction to hummingbirds and butterflies, its the leaves of this plant that I really like: silver, green and purple all rolled together into one lovely package.

And that, gentle gardeners, is my celebration of autumn's 'flowers' for today. I'll be back with more later in the week, I'm sure.