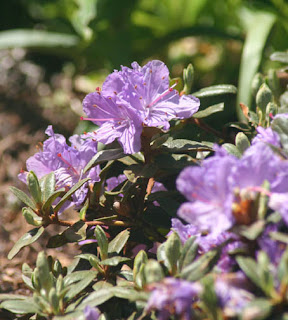 Finally collecting some time to do the last of my top ten plant collections, in between growling at our internet connection and doing some real work. For some inscrutable reason, our connection has been falling to dialup speed in the evening, but I have optimism that our provider--a local business--will get to the bottom of the problem. It's put a cramp in both my blogging and my blog reading, because when pages are image heavy--including my own--and the speed has dropped to dialup...well, it's just too frustrating to sit waiting and I just go do something else.

Something I wanted to clarify; these lists are my own personal favourites (at the moment) based on having them in my garden. Ours is not a small city garden--I would go mad if I lived in an urban setting; we have seven acres up here on our high hill, with a farm on one side of us and a woodlot on the other, and another large acreage across the road owned by our nearest neighbour. There will never be any neighbours looking in our windows from their windows, and I can basically plant whatever I want, money and time permitting, of course. So while some of my choices might not work for your garden, they're by no means a carved in stone thing; just some plants I particularly enjoy and recommend as being good performers. 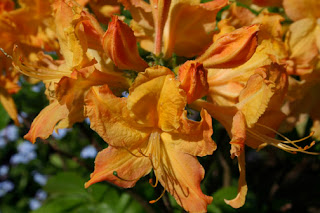 So lets get started. Atlantic Canada has a lot of acid soil, and our cooler temperatures invite the growing of many different ericaceous plants. Because I have friends with amazing collections of rhododendrons and azaleas, in the past couple of years I've become a great fan of these versatile plants too. From the petite daintiness of Rhododendron 'Ramapo' (top photo) to the delights of deciduous azaleas like 'Golden Lights' to the various other rhodos and azaleas around our place, these plants delight me. They're tidy, easy to care for once they're properly planted, and handsome all year round. Other ericaceous plants around our place include Pieris 'Mountain Fire', Gaultheria procumbens, Andromeda polifolia, but the rhododendrons really are becoming habit forming. Just wait til I get my mitts on the Royal Azalea! 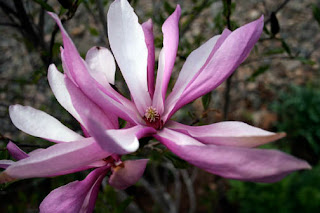 Some of the same culprits who got me onto rhodos also encouraged my dipping into magnolias. A Magnolia stellata has done very well here in the past three years, so this past year I got brave and added M. 'Anne', one of the larger flowered stellata type magnolias, to our garden. It settled in well, and now I'm thinking that the next addition will have to be one of the yellow-flowered beauties. We'll see... 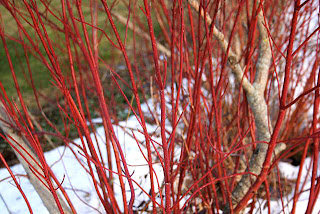 I love Cornus species, especially the tough red osier C. sericea, red osier dogwood. Ours have spread into about five separate shrubs, and I've let several of them get quite big (about 7 feet tall) to provide some shade to one part of the garden. The others I keep cutting back so as to get the spectacularly coloured red twigs, which just light up the back garden in winter. Dogwoods are great attractants for butterflies and birds, which is one of the reasons I like them so much, of course. 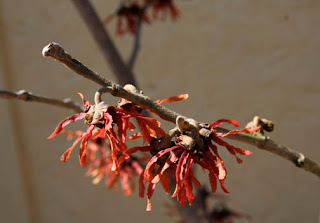 Native witchhazels live in the woods around our property, though I never seem to get down there when they're flowering, and I haven't yet succumbed to the urge to dig one up from the woods either. But this past spring I got my happy mitts on Hamamelis 'Diane' (or is it Diana?), which I've mentioned before; a reddish orange flowered cultivar that caught my eye when I first saw it in a private garden a few years ago. Next year I do plan to add several of the natives, hopefully both the fall-blooming and late-winter types, as they're great bird and beneficial insect hosts too. 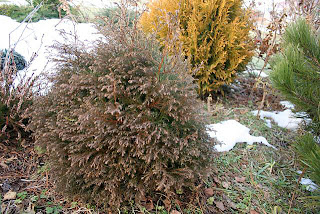 Another type of shrub that's caught my attention in recent years are the evergreens, both broadleaf like the rhodos and hollies, and all of the needled types. I especially am fond of Chamaecyparis, as mentioned in the Top ten trees post, and this one is a star of the winter garden; it's C. 'Heatherbun'. It was described to me as having plum-coloured winter foliage, and wouldn't you say that's about right? I have protected it in the past with evergreen boughs for winter (it's been here for a couple of years now) but this year--it's currently buried (this photo was taken during the melt last week). Behind it is Thuja 'Sunkist', another shrub I am quite fond of. 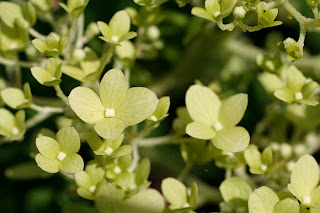 The paniculata grandiflora type hydrangeas do best for me, rather than the more garish mopheads; and this past year, Limelight was a complete showstopper, flowering well into autumn. I left the flowerheads on the plant, which is right outside my office window, and it delights me to watch birds perching on them after snacking at the feeder. 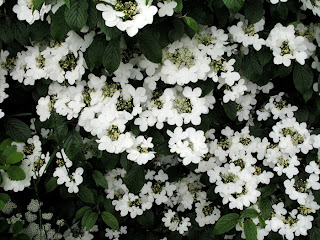 Viburnums are awesome too, and next year my plan is to add a few of the more native ones; currently I have V. trilobum, the socalled highbush cranberry, but I don't have witherod or several other natives that grow nicely around here. Along with a lovely fragrant viburnum that I added this year, we have V. plicatum 'Mariesii', which some call Summer Snowflake; it covers itself with the most beautiful white flowers, and it throws up a few blooms later in the season, too. 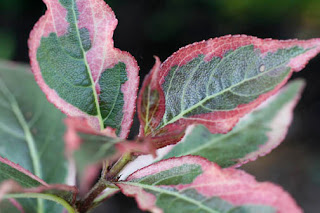 This was one of the most hyped new plants in 2007, and if it overwinters as nicely as it settled in and grew for me, Weigela 'My Monet' will definitely be a shining star in our garden. It's a compact plant, supposedly not growing more than 18-20 inches tall, making it a unique bordering shrub; and look at the colour! The flowers are a bit too pale a pink for my liking, but with foliage like this, who cares? 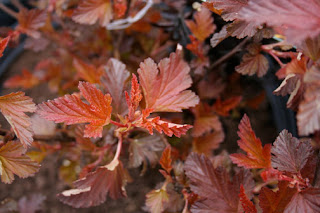 Another new plant that I happily got my mitts on last spring was one I'd become besotted with as soon as I heard about it: Physocarpus 'Coppertina' ninebark. It's well named; brilliant copper foliage that gradually deepens to deep purple as fall comes on. I'm quite besotted with ninebarks for all kinds of reasons; their bright foliage, their tidy clusters of flowers that turn into wonderful fruits, their nicely peeling bark, the way birds flock to them...and 'Coppertina' has the makings of a real star. 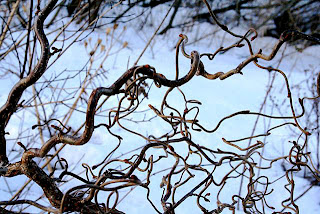 Harry Lauder's Walking Stick is probably the most delightful name I know of for a shrub, also known as Corylus avellana 'Contorta'. This is truly a 4 season plant; some would say its best season is now, when the gnarled branches are free of leaves and we can really admire their structure; they also look great in spring with catkins festooning them, and of course look unique in summer and fall too. The leaves are twisted and crumpled looking during summer, so don't think they're diseased. There's a red-foliaged one, 'Red Majestic' that is pretty tempting, but I'll likely opt for other plants before I pay the premium for it. 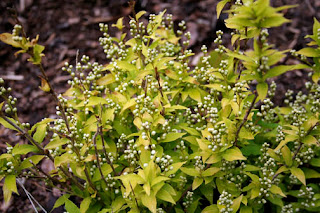 You wouldn't expect me to finish a post without having at least one gold-foliaged plant in the mix, would you? This little Proven Winners Colorchoice shrub is Deutzia 'Chardonay Pearls', and I had to have it for the wine and chocolate garden. It's dainty and attractive, although too much sun does seem to burn the leaf edges--this might have been because I didn't water it sufficiently after planting, but it rallied nicely and settled in well.

So there you have it; I'm sure many of you will have different choices based on where you live and what your tastes are--which is great because it gives me even MORE ideas. Of course, I have way, way more than ten shrubs in the garden, and there are some that just didn't make the cut, even though I love them, like both the curly willow and the 'Nishiki' willow. And did I tell you one of my best buddies has a nursery specializing in trees and shrubs, a lot of them native, and I am incapable of coming home from there without a new plant or six???