In memory yet green...the memory garden 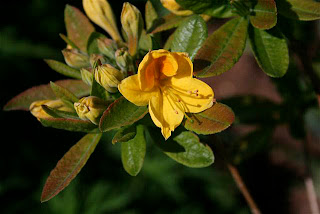 Amy over at Garden Rant started an interesting discussion because she wrote an incredibly moving, but not maudlin, post about how she chose to bury a cherished pet, her cat LeRoy, on her property, and wondered what others do. Some readers are grossed out by that idea; others admit to having ashes of beloved family members (animal and human) on their land, too.

There are a number of beloved cat-children buried on our property, and probably one day there will be others. But I also do something different here as a way of remembering people and special cats (ours and others). We have memory plantings all over our garden. 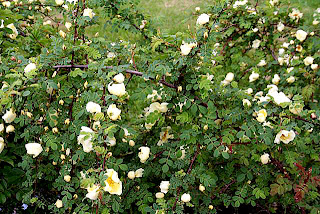 It started when the best cat ever, my big stripy puss Nermal, died eight years ago this month. I decided I would bury his ashes in the garden, although it took me eighteen months to actually do so. I couldn’t bear it. Yes, I’m a mushball, and I still miss Nermie, eight years later. I had a special garden stone made for him with stained glass inlay and his name on it, and that marks his final resting place—which was also a place he loved to sleep. Above this spot is planted the yellow Father Hugo’s rose, a great and zealous once-flowering rosebush with lovely fern like foliage (similar to the pimpernellifolia type roses). 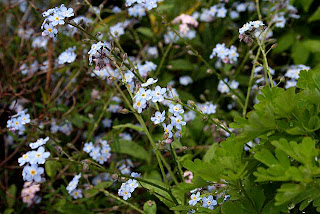 And there are also forget-me-nots everywhere, because the same month as Nermal died, my father was diagnosed with Alzheimer’s disease. I’d always loved forget-me-nots, especially when they take over a lawn in spring and there is a blue mist around homes. But after Dad got sick, I started planting forget-me-nots in earnest, all around the property.

Then the great Canadian author, Timothy Findley, passed away in the summer of 2002. I wrote my master’s thesis on his work, met and corresponded with him a few times, and thought he was the most marvelous of writers and humans. He also adored cats, and he and partner William Whitehead had as many as 27 at one time at Stone Cottage, their home in Ontario, throughout the years. For Findley, I planted a hardy Explorer rose; and then, lest it be lonely, I planted a French one (because they lived in France and Ontario) for Bill Whitehead, even though he is still very much alive; they had been together for nearly 50 years, after all, and that needed to be commended.

The memory garden idea just snowballed. Other people near and dear, and other cats, were honoured by plants in our garden. Sometimes, I’ve put plants into the ground for people I’ve never met, but because I’ve known someone who cared deeply for them (and in a couple of cases, it’s been for the cats of friends, too), instead of a sympathy card, I’ve added a plant to the garden. Usually I send a photo of the plant to the friend; and of course those who have loved ones remembered this way are welcome to come visit whenever they wish. 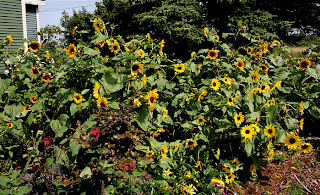 When my former mother in law died two years ago, I decided to dedicate an entire bed of the garden to her. She loved butterflies, and so Marilyn’s butterfly garden, which is even sort of butterfly shaped, came to be. I’ve mentioned this before, and it’s growing nicely, with plenty of plants that butterflies (and other pollinators) love, as well as plants that Marilyn loved. I do have to put more sunflowers in, however, as she was as fond of them as I am, but most of our sunflowers grow in other parts of the yard. So that’s on the agenda for this year.

Mostly I’m planting shrubs and trees now for people, like my friend Ladny, who has a linden tree in her memory. Sadly, I have plantings in waiting now, for several people who have died in the months since I’ve been unable to plant. I try as much as possible to match a person (or feline) personality to a particular plant. My husband’s cousin loved working with wood, so for him I put in a young oak; a friend’s cat was a French-speaking and exploring type of feline, so for him, the Explorer rose Louis Jolliet. And so on.

I’ve gotten smarter in recent months, and started labeling the plants with the name of the person (or purrball) being remembered, so that I don’t lose track. It’s easy to write the names down, of course, and I have, but the little copper tags from Lee Valley that you write on then tie on with copper wire really appeal to me. They’re tough, too; I haven’t lost one yet despite the vagaries of a Scotts Bay winter. 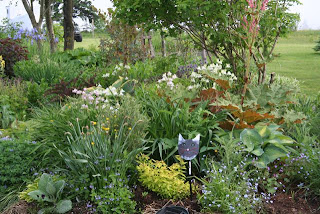 Does this memory garden tending help the grieving process? I like to think it does for others, as it does for me. Other writers have commented on how they feel a loved one’s presence nearby as they work in their garden; even though my father’s ashes are ensconced in a plot in a hideous (ie, tree and shrub-free) cemetery in another part of the province, he is always, always here, especially as I tend the gardens and mutter at the goutweed (I hear him laughing and reminding me about mint!) And I still hear Nermal ‘talking’ to me as he helped in the garden, and so with the other furbabies too. And for me, that’s as good as heaven on earth can be. 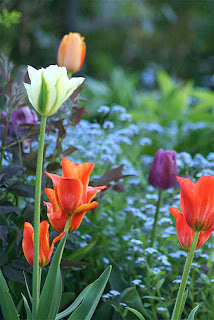