A garden of eagles 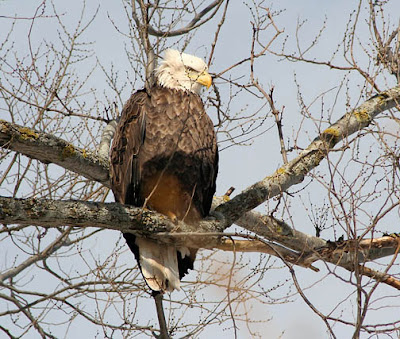 When I got up this morning at 0630 and looked at the thermometer, my heart sank. It was nearly 0 degrees F then, and the wind was blowing, creating a wind chillfactor of about minus a hundred and leventy-three. I figured that the birdwatching wouldn't be all that great in the back yard, but I'd go back to bed for a while and then go check out the eagle situation in Sheffield Mills and Kingsport. 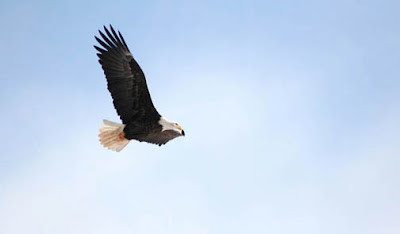 I'm really glad I did. Now, two things about these photos before we go any further. The photos in my previous post aren't mine; one is from US Fish and Wildlife (as noted); the other is just a file in my computer, in one of my graphics/image programs. All the images today, however are mine; BUT! I didn't use the tripod and I didn't get as close as I would have had it not been Eagle-Watching weekend. With so many people around watching them while they fed, I didn't want to either set up the tripod or edge in closer, because then everyone else would have come in closer and disturbed the birds. 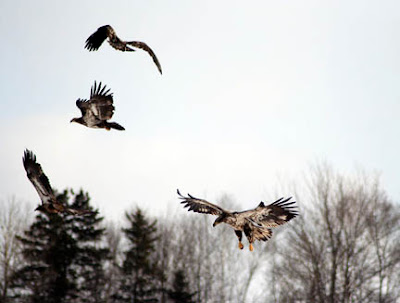 One of the poultry farmers was assigned to put out dead stock for the eagles in this particular viewing site three times this morning. Now, I figure eagles must have some sort of ESP (Eagle Supper Perception) because there's one or two...then a few more...and then more. Quite a few more. The most that are in any of these photos is 15 eagles, but there were easily 30 or more feeding at any one time. I just couldn't get them all into my photos! 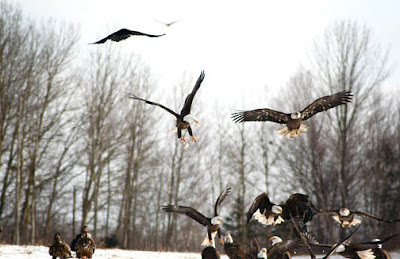 Quite a few more! Those with brown heads and tail feathers are juveniles, or as I call them, "teenage eagles". They tend to be on the lower end of the pecking order in these feeding sessions. 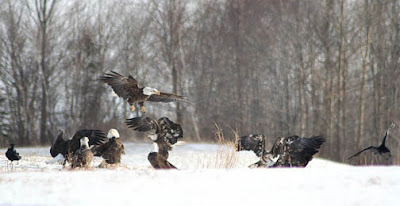 But there are a lot of arguments about who's gonna get what particular tasty meal. Eagles are opportunistic feeders, meaning they'll eat pretty much whatever they can: fish down at the shore, small animals and other birds, or carrion such as roadkill--or, as in this case, chickens. 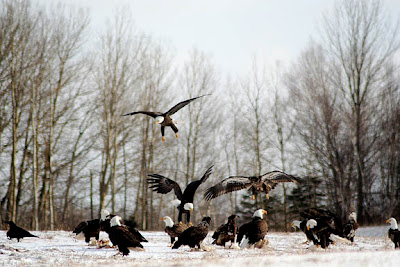 If you've never seen eagles on the ground, or doing these take-off and landing routines, you might not know that on the ground, they're rather ungainly. I maintain they have a gait not unlike a drunken sailor, a sort of rolling, comical gait. My husband says when they're coming in to land, they look like they're wearing rubber boots. 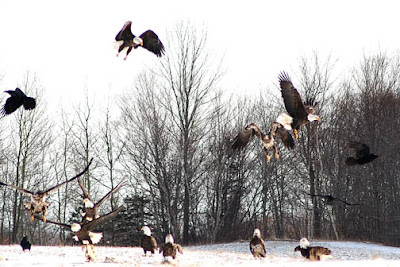 They make all kinds of curious noises, from their usual cries when in flight to a host of clicks, screams, chirps, twitters (yes, really). Some of them probably mean, "Back off! Get your own chicken!" 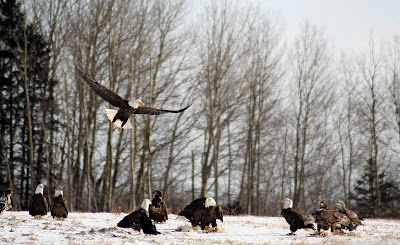 For all I chuckle about their behaviours, they make my heart ache with happiness to watch them. And judging from the faces of the dozens of other bystanders also watching...they make a lot of people happy. And proud that this mighty bird is back from the brink of endangered to a thriving population again. 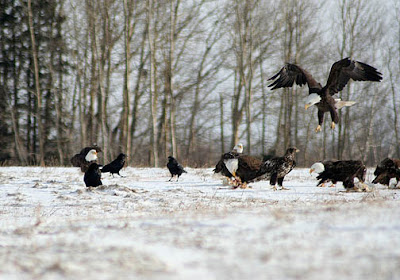 There are usually some sycophants hanging around; ravens, crows and gulls, who are waiting to clean up whatever the eagles might leave behind. The eagles chase them off, but rather hap-hazardly, depending on just how sated they're feeling. 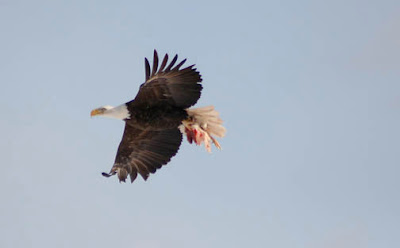 Some prefer to take their chicken "to go"... 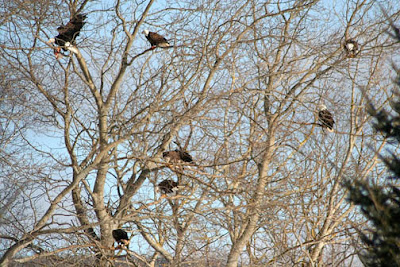 ...After which they sit around in the 'eagle trees', preening, grumbling, digesting, and watching the eagle-watchers. 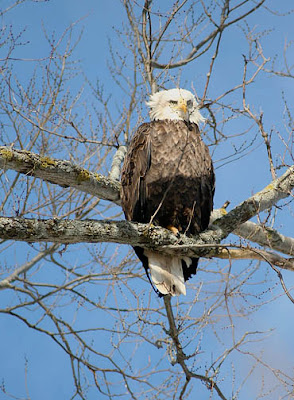 It's supposed to be milder tomorrow, so I'm hoping for better success in my backyard birdwatching; I did check when I came home this afternoon, but the only visitors at the time were my usual collection of chickadees, some redpolls, and the hairy/downy woodpecker. But I figure the eagles more than make up for it!