Of arbours and pergolas 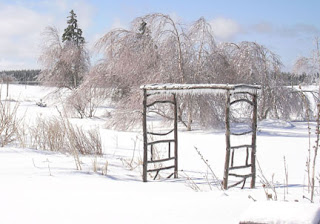 The terrific folks over at Gardening Gone Wild have been doing a series of garden design workshops over the past couple of months, and this month have turned their attention to arbours and pergolas. (Or as they spell them, arbORs and pergolas. It's a country thing, whether you spell words like colour, arbour and favourite like color, arbor and favorite. I think we Canajans lean to our European roots on this and things like metre, theatre and centre.That was a digression.)
I'm a big fan of trellises, obelisks, arbours, pergolas, and anything else that adds structure and height to the garden. Our place may be on top of a hill, but it's still pretty wideopen, with just the one line of mature spruces along the south side of the house and a collection of birches out back to give some real height around the place. We have seven acres up here, too, so we have a LOT of room (including for trees that will become giants one day, hence my choices in a previous post--they're my personal favourites, not necessarily suited for everyone's garden. That's another digression!)
The first arbour that my LSS (Longsuffering spouse) built in the back yard was a whimsical one made of alders. He was trying out a new tool thingy he got from Lee Valley that I think is a mortise and tenon cutter for logs/branches/poles, and wanted to see what he could do with the abundant supply of alders around the area. 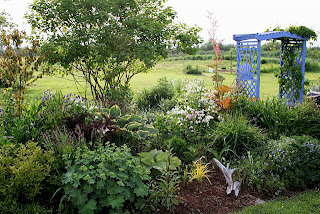 I loved this arbour, which stood happily for about four years; until in the spring of 2005, LSS hit it with the tractor as he was doing something, and it collapsed like a house of cards. He hadn't treated the wood in any way, just tried building this to see what would happen, and it had basically decomposed.
I was VERY upset. Mind you, my father was busily dying of Alzheimers in a hospital two hours drive away, and I was going there every day and was just a little bit emotional to begin with. Well, LSS got to work one day while I was at the hospital, and built a brand new arbour, which he painted periwinkle blue and ensconced in the same spot where the alder arbour had been.
As a result, every time I look at my bright blue back arbour, I think not only of the love of my life, my LSS and chief woodworker, but also of my Dad. The blue colour works well because nothing in the garden is that shade (well, maybe the Corydalis elata is close) and it shows up in every weather situation. 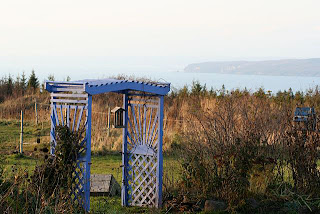 This structure acts as a gateway between the inner back yard and the outer; the outer is a more large and sprawling place, where I'm gradually adding more trees and developing a couple of different beds (along with the kitty cemetary). It's festooned with a Virginia creeper on one side, and on the other side, a recalcitrant clematis which is going to get dug out if it doesn't flower this coming year (it's been there for three or four years now without flowering, where the others all cover themselves in blooms. Threats work well.). The other climber on that side of the arbour is a Veilchanblau rose, which doesn't get as enormous as it does in some gardens because the cold kills it back somewhat ever winter. 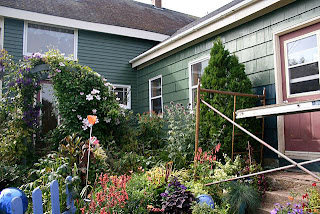 The first arbour that LSS built for me is out front; it's a simple pattern, and is stained a different shade of blue; it's about 7 years old now, maybe eight, and covered in clematis and honeysuckle. One of the clematis is a Jackmanii that I liberated from a house that was going to be torn down; it covers itself terrifically with flowers in rich royal purple every year. The other side is festooned with both Josephine and Nelly Moser, and these come on later because they get more shade (from the house). A young Graham Thomas honeysuckle is working its way up the front side of the arbour, but there's also a climbing rose--Alchemyst--with its terrific sharp canes and breathtaking flowers. Usually there's also a hummingbird feeder, and a hanging basket or too, also festooning this particular structure. In winter, the hummer feeders are replaced by suet or seed feeders. And as you can see, the same blue as the back arbour also is used as an accent on other things, including a bit of fence in one bed that supports the delphinium. It's also on MY lawnchair, one birdfeeder post, the greenhouse door, and another bordering fence.
I love vertically climbing plants of all sorts, and keep adding them whereever possible; LSS can always be relied on to create another obelisk or trellis to support such things. Have I mentioned what a great guy he is?