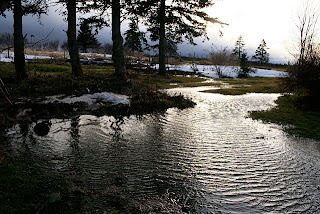 Well, this is bordering on the ridiculous. Just a couple of days ago, we had snow everywhere. Then the big melt came along, starting on Tuesday, I think it was. Happily, there's been no rain to speak of, just mild temperatures and wind. Lots of wind. Enough to make waves in this pond. Oh, wait. That's not a pond. That's part of the southeast side of the yard. It always gets wet there just because of the lay of the land and assorted springs and so on, but this is a bit much. 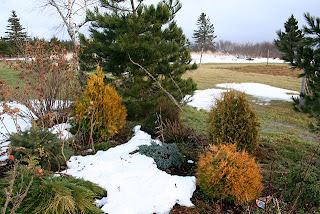 It's been kind of neat to see the plants emerge from their immense white blankets, although taking photos in this wind has been a bit problematic. I talked in my article on favourite shrubs about liking evergreens for their winter colour, and here's a good example; we have 'Rheingold', 'Sunkist' and 'Sherwood Frost' thujas; 'Blue Star' juniper; 'Heatherbun' chamaecyparis; another gold-green juniper of unknown name, a weeping hemlock, two native pines, some heaths and heathers, several rugosa roses, and my Metasequoia, all contributing various colours and lots of texture to the scene. Actually, in this shot the ericas and callunas are still hidden under the snow; today they've emerged but it's even windier and I didn't linger to take their photos. 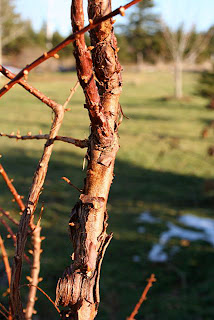 The bark of the dawn redwood, or metasequoia, is one of the features of this tree I like best; you need winter weather, when the needles have dropped, to see it to its best detail, like this. 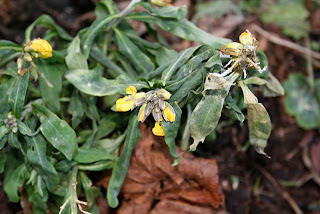 I know we're still a few days from Garden Bloggers Bloom Day, but this brave little erysimum made me chuckle. I last saw it around Christmas, before the big dumps of snow buried it; but now it's emerged and though a little wan, it looks like it's still trying to flower. It's a hero in my books. 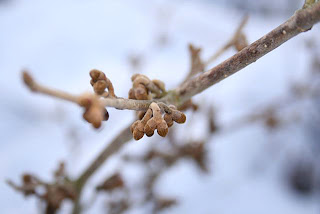 Here's a great promise of spring-to-come; my 'Diane' hamamelis is covered with buds, which look like little brown toes; I don't expect it to flower before mid-late March, although it could be later. I WILL resist the urge to cut off a twig or two and force them indoors...I will...the shrub isn't big enough yet...must be strong... 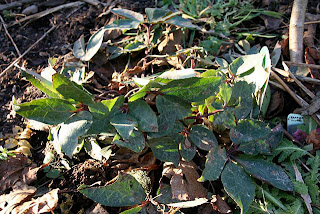 I've whined here before, and on other blogger's sites, about my ongoing trials and tribulations with hellebores. This one is planted under 'Diane' hamamelis, and oh, look...it doesn't look too bad! The foliage is nice and green, and a closer look showed me buds. Wow! Maybe this year...mustn't get my hopes up too far...and I'm going to mulch it as soon as the wind goes down, because it's supposed to go cold here in a day or two, and we know we'll have much more snow...but just maybe, this is the year I'll get a hellebore to flower for me. Hope springs eternal... 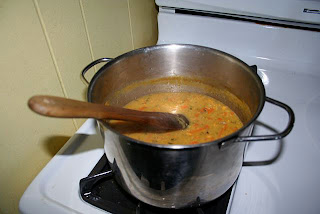 Well, enough of all that wind and wet. Let's go make something good to eat. One of the things I'm working on as we do the quest for what's wrong with my help, is eating well. Now, I've been bored with cooking for a long time, due to a LSS who is less than adventurous about new flavours. But I'm determined to feel better, and am eliminating some things like pre-fab anything, and cooking from scratch. One of my inspirations is my friend Charmian Christie's blog, where she waxes eloquent about food, both in terms of fun things about it and also provides some awesome recipes. This pot simmering on my propane stove is her Simple Scottish red lentil soup, which is a fab recipe. In the interest of full disclosure, though, I varied it slightly, adding ginger and Madras curry paste, and grating sweet potato in along with the one carrot that was left in the fridge. Time for a veggie run, obviously! Go and visit Charmian's blog--I especially like it when she has a little rant about something like 'organic pancake blasters' or overly ungainly appliances.

I know some of you love to cook, and occasionally share recipes on your blogs; I know also there are all kinds of recipe websites and blogs out there, so I won't suggest we start a recipe exchange as such. I AM looking for some interesting recipe sites like Charmian's, and am also always on the lookout for high fibre, low-meat recipes; we aren't vegetarian, but we are cutting down on the amount of meat we eat, and looking for inspirations is always important. 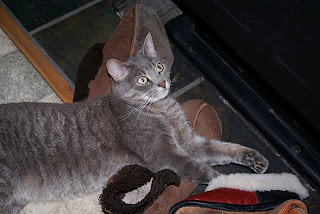 Of course, it's also important to get adequate rest and stay warm when regaining healthy lifestyles--or maintaining them. Simon Q, a professional slipper-sleeper, demonstrates the proper technique for preventing overtiredness on windy stormy winter days. Sheepskin and fleece lined slippers and a woodstove aren't compulsory tools, but they do help.
I can feel a nap coming on just watching him.