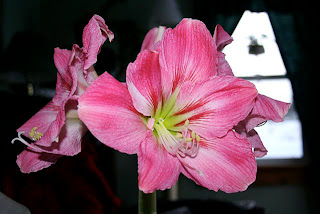 We’ve had a few days of major catchup happening, where I finally caught up a few of the assignments that weren’t finished. This meant doing a lot of reading and writing, and by days’ end, with our Internet connection still acting stupid at night, there wasn’t time or patience for sitting trying to read blogs or post to my own.

The garden continues to slumber under vast quantities of snow, although we’re due for a couple of mild days so it’s hard to say what we’ll have by Tuesday! The only new blooms I have to report are on another amaryllis. I was expecting this to be a bright red variety, but it’s brilliant pink with tinges of red and some white (Cindy at Rosehaven, you must love this particular one. The only problem is…it’s not “Mambo” as it was labeled. Oh well, I love some surprises. 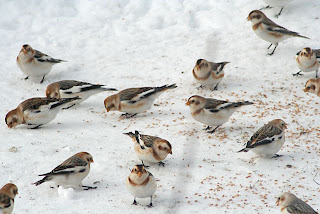 What’s been keeping me amused most days is watching the snow buntings. Commonly called snowbirds, and made famous both by the tiresome Anne Murray and by Canadians who flee to warmer climates in winter, these endearing birds are endless fun to watch.

Snow buntings make their home in the high lonely reaches of the Arctic, but during winter they come a ways south; the wonderful Cornell Lab of Ornithology shows a map of their winter distribution as well as many fascinating facts. 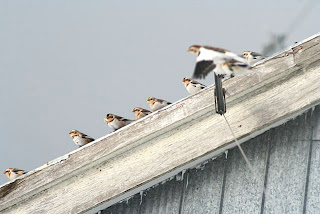 In their winter plumage, they have more brown and black on them then in their breeding plumage, which has a lot more white, but these give wonderful flashes of white on their wings as they fly. They’ll land in the poplar and birch trees, discussing amongst themselves what to do next, then start coming down to the ground, a few at a time. We see them throughout the winter months, although this year, perhaps because there’s so much snow and we put out feed all the time, we have a huge flock, somewhere between 100-200. Or so. Getting a photograph of all of them is impossible, at least for me. 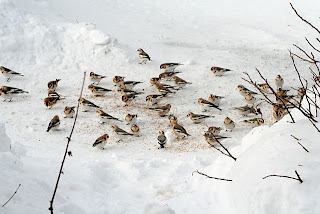 Trying to count snow buntings is rather like herding cats. They fly in perfect formations, wheeling around the field and into the back yard, and dropping down like snowflakes from trees or barn or clothesline to snatch up a few grains of feed. 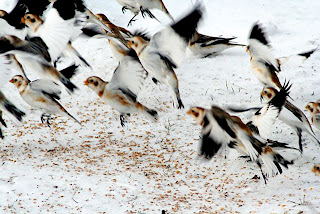 At some unseen (by my eyes) signal, they all take flight again... 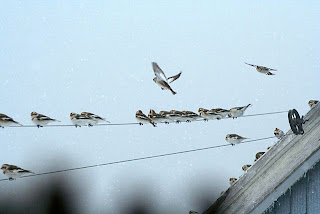 They don’t go far before they’ve landed on the barn or house roof, or the clothesline, and sit twittering and watching before they cascade back for another snack. This display goes on from dawn to dusk, quite literally. We'll see them most days until usually late March, when they head back towards their frigid breeding grounds in the Arctic. They're one of the most wonderful things about winter, and I think they're rather like sunflowers--you can't watch them for more than a minute and not smile and feel light-hearted. At least, that's my theory and I'm sticking to it! 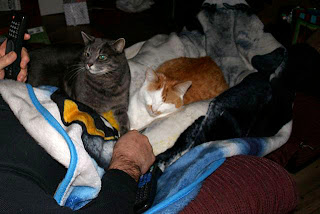 Not surprisingly, the catchildren are fascinated by all this activity and they make great speeches about the programming on bird television. But they also get very tired watching all this busy-ness, and decide that perhaps resting is a better idea. How many of us can get into our father’s lap? With the two biggest, Spunky and Mungus, holding court, others have to content themselves with the couch, other chairs, or beds...or come and coax the cat-mummy to come have a nap with them.