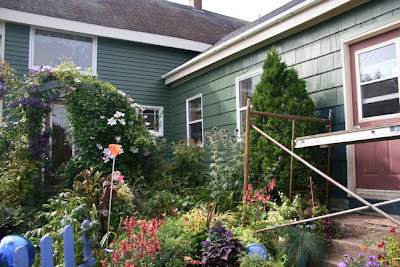 I've been on the sick list this week, having been knocked flat by an ongoing health issue that flares up occasionally. This has meant getting behind in a lot of things, especially writing and wandering around the garden. Happily for me, my longsuffering spouse is very good about doing things like housework even when i'm NOT sick or away, so the house isn't a disaster area. Just the garden.

But despite being somewhat chaotic--okay, very chaotic--the garden is still performing exuberantly, considering we're in the last gasp of September now. I'm putting up just a few for now, as I need to rest and let the antibiotics do what they're good at doing. So to kick off, here's the front of the house last week, before the new door went in on Monday. You can't see everything that's in bloom of course, but we have a rainbow of perennials including yellow corydalis, blue globe thistles, mauve-pink phlox with variegated foliage, several rambunctious clematis (Jackmanii, Nelly Moser and another mystery clematis), cimicifuga, monarda and some grasses. Then there are the container plantings which are still mostly doing nicely, especially the hummingbird mint (Agastache) and the osteospermums and foliage plants. 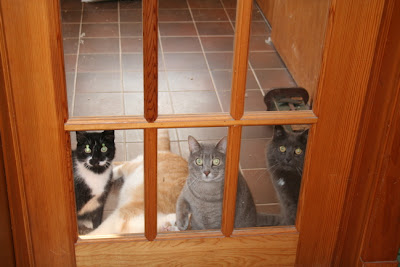 did you ever see such a plaintive collection of characters? These are Nibs, Mungus, Simon Q and Toby in the side porch, also known as the kitty hospital or jail depending on the situations. They were confined to the porch while my longsuffering spouse and his brother in law put the new front door in, as they aren't allowed outside without parental supervision. Nibs has three legs because he WAS formerly allowed out without supervision and tried to play chicken with an oncoming car. The other three escape periodically and make me chase them around the yard, but mostly they're content to be indoor cats. Still, the temptation of an open door is a lot to ask of a kitty.... 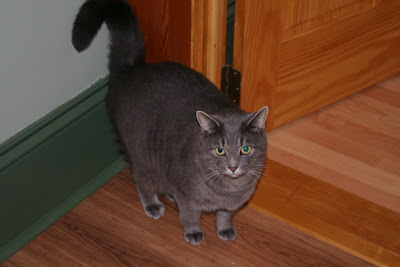 ...except for Spunky Boomerang. Spunky was an abandoned catchild we rescued from the side of the road, and he is completely devoted to me--and has no intention of going outdoors again ever. He walked over to the open doorway, sniffed the outdoors, and ran back to me--but he did go torment his siblings just a bit, peeking in through the glass at them.

They all forgave me when I released them from their confinement and gave them treats. 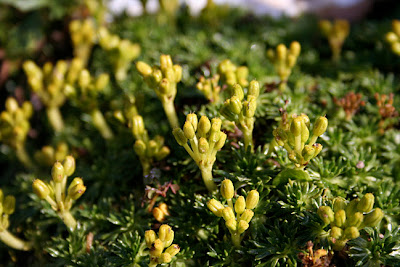 Back to the plants now! We have some really interesting things in various spots in our garden, and will be getting more next spring (I'm already plotting. ) You would have to touch this plant to truly appreciate it, because it feels like plastic. It's Bolax glebaria, which some people do call astroturf apparently. A native of the Falkland islands, I was entranced by it when I saw it at Bayport this spring, and planted it in my cement clamshell trough. Its flowers are completely insignificant, but they don't have to be showy to be fascinating. 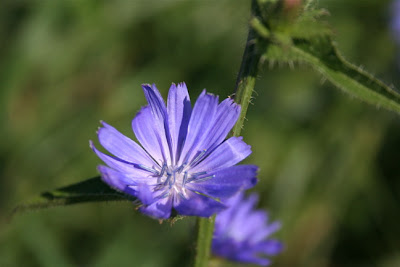 Everyone has chicory, right? Well....there's lots of it growing down in Hants county along the roadsides, and scattered places in Kings county, but I wanted some here in my yard. Last year I collected a few seedheads and tossed them around the yard, and really didn't know what I'd be getting--or if I'd get anything. It's just started to flower in the past couple of weeks, but I think the plant might have gotten hit by the string trimmer a few weeks back, as it has put up a lot of stems of flowers. The blue is so cool and soothing, isn't it? My plan is to throw some seeds down by the pond, and hope it takes hold down there--a good pollinator attracting plant and handsome to boot. 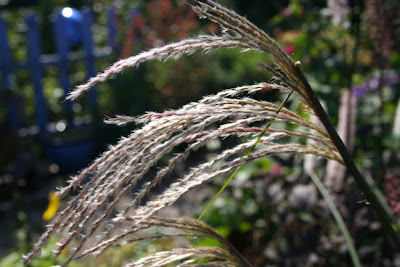 This is the time for the Japanese Silver grasses, or Miscanthus, to really show their stuff, and they're starting nicely here. I have four or five different clumps, and at least four different species, but until they flower I can't really figure out which is which, due to a bad case of LoLa, or Lost Label. 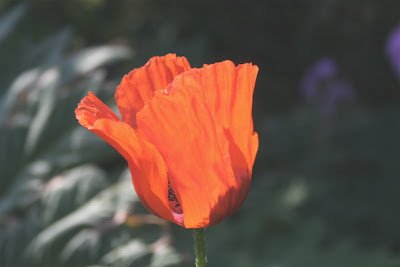 Do not adjust your screens. This is not a test. This is a fall flower on an Oriental poppy (Papaver orientalis); for reasons only known to the plant, one of my orientals decided to throw up a couple of buds and flower a second time. I wish that Patty's Plum would do that, but she hasn't shown willing. So far, anyway. 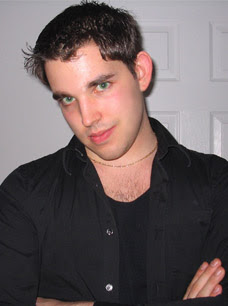 Finally, before I go off to have that nap, a belated blog-birthday greeting to the best thing I've ever done: my son Ryan. He turned 21 just a couple of days ago, and all of us--his two biological parents and two stepparents--love him dearly and are very proud of him. Ryan is a computer whiz as well as a young filmmaker in training, a partner in an original film company, and we naturally assume that he's going to be the next Michael Moore. Or David Cronenburg. Or Peter Jackson. I'm not entirely sure how it is he got to be twenty-one, because it wasn't that long ago he told me he didn't want to become a teenager...He inherited his mother's love of cats and sense of humour, but he's a lot like his dad too, and not just in looks. I'd like to think he got the best of both of us, although he hasn't shown any signs of being a green thumb--so far, anyway. Happy Birthday, number one offspring, we loves ya!