One of the things that really delights me about plants is the way one genus can have so many very different species (and cultivars, of course) The first euphorbia I remember growing was ‘Crown of Thorns’ but most of us who celebrate Christmas know a variety that’s even more commonly found: the poinsettia.

Here’s a little botany for those who care about such things. The brightly coloured ‘petals’ on poinsettias and their Euphorbia relatives are actually modified leaves called ‘bracts.’ The flowers are in the centre, quite small and uninteresting looking. However—that’s no reason to spraypaint them blue (a rant from last December, with apologies to any of my American friends—I wasn’t picking on you, just the poinsettias!)

Anyway, on to the interesting stuff. Even up here in less-than tropical Nova Scotia, we have a pile of euphorbias that lend themselves splendidly to our gardens. Who hasn’t grown cushion spurge, E. polychroma? It might be ‘overgrown’ to some—but I like it a lot—well behaved, sits there where planted and shows off politely all season long. I now have a dandy variegated variety, ‘Lacey’, that I think is just as nice.

Euphorbias tend to be pretty undemanding; give them good drainage, sun, (part shade for a few of them) and that’s about it. Divide them occasionally (those that are inclined to spread by rhizomes) or pot up seedlings from those that spread seed, and that’s it. Many of them are particularly good for xerophyte gardens, because they can handle dry conditions without being too bothered. We can’t grow some of the tender or heat-loving types, but there are plenty to keep me entertained. I bought six new-to-me cultivars this year, and we’ll see if they all come through or not.

One caveat; although poinsettias aren’t toxic like they’ve long been reputed to be, many (I won’t say all because I don’t know) euphorbias exude a milky sap which can be quite caustic. About five years ago I broke a stem of cypress spurge and splashed a bit of sap in my eye, which resulted in a 6 hour visit to the emergency room at the hospital. Not my idea of fun, and it was VERY uncomfortable. So do be careful when working with these otherwise charming and versatile plants. 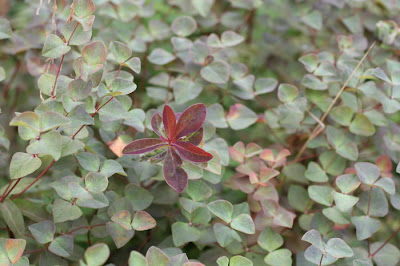 E. ‘Chameleon’; This is my Chameleon in its late-summer phase, a flsh of greens and pinks—with one stalwart purple stem of leaves in contrast. This one does seed, but I have plenty of places I’d like to put it, so seed on, plant! 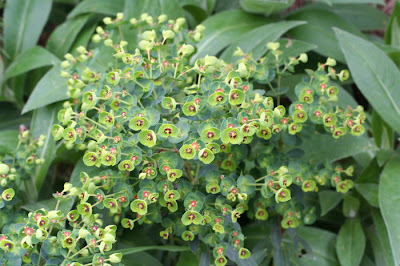 E. martini ‘Rudolph’ New to me this year, and quite fascinating with the dark stamens in the flower centre—looks like eyes to me. I’ve tucked it into a sheltered spot, just to be on the safe side. 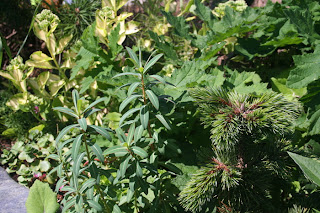 E. Excaliber Hasn’t done a lot yet except settle in and grow. I like it for the silver central rib in the leaves. Here it is sitting beside ‘Bob the bristlecone pine’. It may not live 4000 years like I hope Bob will, but it's still a nice plant! 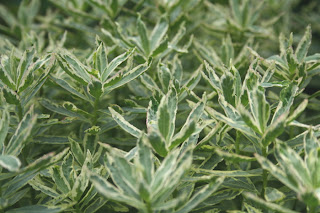 E. polychroma ‘Lacey’ Also called E. variegata, apparently. I like the soft silvery edges to the leaves, and when the yellow bracts and flowers were out it was quite striking. It’s planted not far from E. Efanthia, and with a limeglow juniper and a gold plumose falsecypress nearby to add to the lemonlime fest. 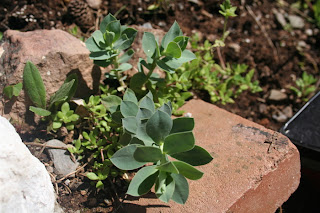 E. myrsinites Donkey-tail spurge gives me some problems because it gets traumatized in the spring by too much wet weather—even though it’s planted in near-gravel. Despite its moodiness, it puts up seedlings every year, so I always have some new plant. I’m thinking about putting it in a trough that I can move into the greenhouse until the weather smartens up in late spring. 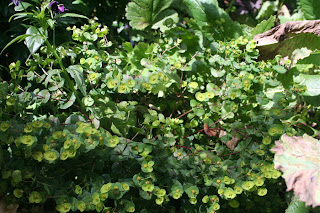 E. Efanthia. Right now, Efanthia looks pretty much like other spurges—green. But as cool weather comes on, it will turn burgundy. This was the mystery spurge I had last year-and this year I’m covering it earlier to protect it, as it’s only hardy to -20 F, and we DO get days colder than that. 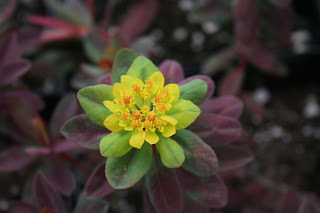 E. ‘Bonfire’ Caused me to go right into orbit when I saw it either in a magazine or on a website. This is STUNNING in the spring; purple foliage, tapering to green bracts and then those brilliant acid-yellow flowers. I love it! 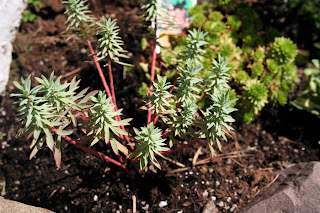 E. Blue Haze. This may be a zonal denial plant too, but it’s planted near big stones that catch and hold the heat, and I’ll give it the spruce-bough treatment come late November, and we’ll see how it fares. Its ghost-blue colour had me but the rosey stalks add to the fun. 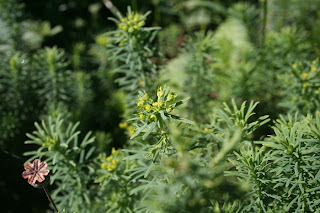 E. cyparissias There was Cypress spurge here when we arrived, and I’ve moved it to a different spot, where it behaves nicely. It’s a pretty, lacy thing, although not that strikingly different. 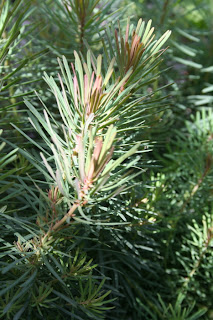 E. c. ‘Fen’s Ruby’ However, this cypress spurge rocks! It’s got this lovely burgundy tint to its foliage as the summer goes on, and while last year it wasn’t much, it’s taken hold nicely this year. I can’t remember the fall colour, but will watch for it. 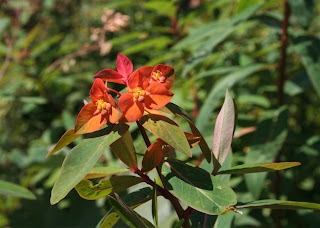 E. griffithii Fireglow. This is my favourite euphorbia, bar none. (Dixter, a better behaved cultivar, died on me—so it’s not THAT well behaved!). Others have found Fireglow a bit too territory-stealing, but I just dig up the ‘orange-asparagus’ shoots in the spring that I don’t want, and give them to people who react like I did when I saw this. “I want it. Now!” The year I got it, the nursery I had hoped to claim a pot from didn’t have enough to divide; but I found it at the NSAC garden plant sale and I ran towards it, getting there just ahead of some bleached-blonde chickie who gave me a dirty look.

This concludes my love-song-to spurges. It’s curious (to me, anyway) that three of my favourite perennials have botanical names starting with E; Echinacea, Eryngium, and Euphorbia. Does this mean anything? Probably not—but the plants are Excellent!