Home is the traveller, home from the seas... 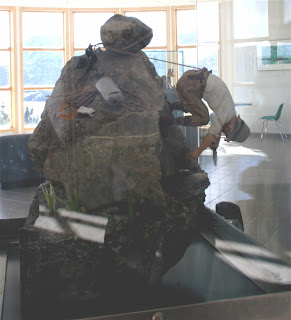 ...and the plant-hunter home from the barrens.

I've been home now for just under 48 hours, and it's taken that long to come back down to earth and get some rest. One undesired souvenir of our trip was a whalloping headcold, and that coupled with six hours sleep in total on three nights, and all the driving, etc, made me declare yesterday a sort of mental health break from everything except a bit of work.

It's too early yet to decide which was the favourite part of our trip, although Saturday probably ranks in the top three. Friday we did some plant-hunting in L'Anse Amour, 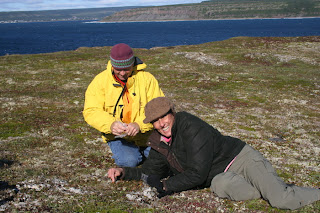 (photo of two of our intrepid planthunting team)

before the wind did us in and we visited the lighthouse and its giftshop (again) and stocked up on presents, including lots of labradorite jewelry. If you've never seen labradorite, it's a stunningly beautiful semi-precious stone, found in Labrador and one or two other sites in the world. It's iridescent like an opal or moonstone, with fractures in the stone casting colours of blue and green, primarily. Some say it looks like the northern lights are trapped in it; others that its the colour of the sea, which is why I love it so much. Naturally, I added to my collection, but we also succumbed to handmade woolen mittens, gloves, and socks, knowing full well that they'll be well used and appreciated at home in weeks to come.

Lunch found us only a few miles away in L'anse au Clair, and we originally thought we'd follow Captain Steele and some of the others a ways into Quebec to 'The Gorge'. However, on arriving at Blanc Sablon where the ferry back to Nfld runs, we decided we'd best join the queue to get across, as 4 crossings had been cancelled due to the storm on Thursday and there was a bit of a backlog. 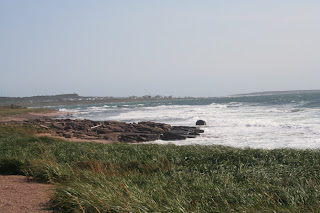 We drove around Blanc Sablon and admired the dunes and beaches (still a bit storm-tossed) then I joined the ticket queue while my travelling companion went planthunting up this high hill right by the ferry terminal.

The crossing to St. Barbes, Nfld was uneventful to me, but others in our party didn't feel the same way. It WAS a bit choppy, but nothing to worry about. Our original plan was to return to Rocky Harbour for the night but we decided instead to stay at Torrent River, about midway between the ferry and Rocky Harbour, because we didn't want to encounter moose or other surprises while driving at night on an unfamiliar, and very wind-swept, road.

Saturday saw us back in Gros Morne and heading for the Tablelands, which is one of the features of Gros Morne that makes it a UNESCO World Heritage site. 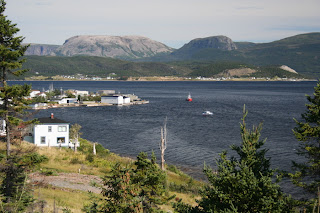 First, we stopped to admire the view across Bonne Bay and yet another look at the magnificent brooding mountain of Gros Morne. 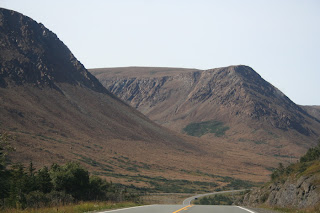 Then we drove up the long and winding road that brought us to the top of the Tablelands--or as I called it as I stared at it in wonder, Mars.

We had glimpsed a patch of ice hanging on a north face of the Tablelands,which had given me a bit of insight into what we were about to see. 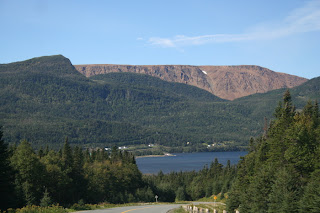 But not nearly enough. Honestly, it was like being dropped onto another planet, or at the very least, another part of the world. I've never been to the western US, but doesn't this look like Arizona, or Nevada, or New Mexico--anything but the green boreal forest of Nfld? 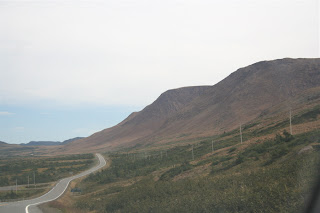 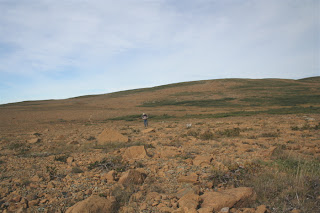 On a cursory look at all these reddish rocks, thrown up from the earth's mantle some half a billion years ago, you would think that nothing could grow there. Here's an explanation from Wikipedia

The Tablelands, found between the towns of Trout River and Woody Point in Gros Morne National Park, look more like a barren desert than traditional Newfoundland. This is due to the ultramafic rock - peridotite - which makes up the Tablelands. It is thought to originate in the earth's mantle and was forced up from the depths during a plate collision several hundred million years ago. Peridotite lacks the usual nutrients required to sustain most plant life, hence its barren appearance. The rock is very low in calcium, very high in magnesium, and has toxic amounts of heavy metals. Peridotite is also high in iron, which accounts for its brownish colour (rusted colour). Underneath this weathered zone, the rock is really a dark green colour.

I didn't collect any rock except for one small piece (still under the driver's seat in my car, I think!) But while my travelling companion eagerly collected seed from some even-smaller-than-usual Rhododendron lapponicum, 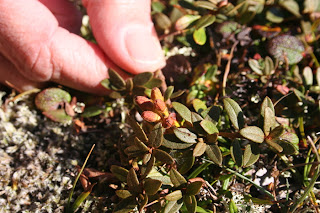 I walked around and took photos of some of the plants clinging to life on this remote, windswept plain of rock. It was surprising to find pitcher plants, 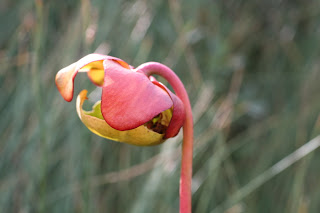 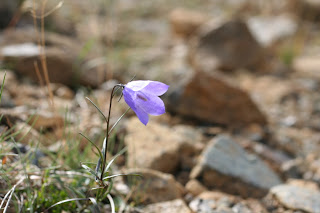 among a variety of potentillas, junipers, thrifts, and other plants we commonly enjoy in our gardens, and don't expect to find in such a stunningly alien landscape.
We could have spent much longer there, but it was clouding up and we were hearing reports of further wind and bad weather, so reluctantly we headed off to civilization (in the form of Corner Brook, where we had our first Tim Horton's coffee in nearly a week and got a carwash to remove some of the salt and dirt from my car) and then continued on towards Port aux Basques and the ferry back to the mainland.

At Wreck House not far from Port aux Basques, on the moody Table Mountain, my nerves were tested as the wind screaming across the plain was incredible. I have no photos from there, but let me explain the name of the site. When Nfld still had its notorious narrow-gauge railway, trains were occasionally blown from the tracks along this spot! There was a house where people could take shelter, but it's long gone; as is the man who once was the official wind-tester for the railway. However, when weather warnings give high winds for the Wreck House area, drivers know to exercise caution along the site, which routinely gets winds in excess of 200 kph! It's very much like La Suete outside of Cheticamp, in Cape Breton! Our winds weren't that high, to be sure, but it was an uncomfortable few minutes driving along that plateau. I wondered how people with tractor trailers or highsided trailers felt.

The wind and rain made for a bit of a stormy crossing but the Joseph and Clara Smallwood, our ferry to North Sydney, is a great sea boat. We simply headed to our berths and went to sleep, lulled by the rocking of the ship as she brought us back home.

All in all, it was a remarkable voyage, and an enlightening one. Although I have to admit I was very happy to see maple trees in great abundance again, after barrens or conifers in great abundance. And flower gardens too, as they had been in short supply along our route. More on that in future postings, however.

And I have gotten the wind tangles out of my hair, finally. Pity Nfld and Labrador hasn't harnessed their wind potential a little more fully yet--but I expect that will come too! 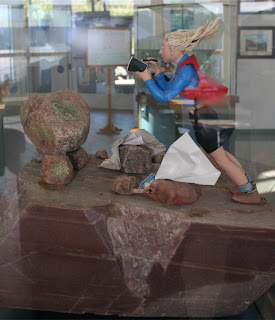 Photo above and at the top are sculptures at the Gros Morne Discovery Centre in Woody Point of typical explorers in Gros Morne--plant hunters and geologists! They resemble us during our adventures.