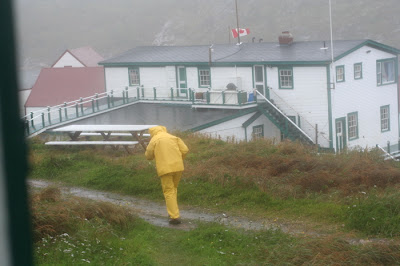 Into every life--and every trip--a little rain must fall. In the case of Wednesday on Battle Harbour, it wasn't a little rain. It was a drownpour! Drenching, wild rains, but also just a little bit of wind--something around 60 kph, for the first go-around.
Thursday dawned cool and clear--and breezy. Just how breezy, we weren't to know for a while. But we're a little ahead of ourselves here. First we made the ride by ferry back to mainland Labrador, which was comfortable and not indicative that there might be something ahead, then took the Highway of Hell (also known by most people as the Labrador Highway) back to Red Bay. This time, with less urgency, we stopped to look around some and take photos. We were especially struck by the rapidly running river, and the Mars-like appearance of the burned barrens all around the area--for miles and miles. 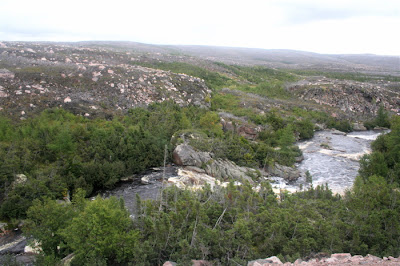 We got back to Red Bay and noticed that things were a bit exciteable there, in terms of the weather. We were having, apparently, the tail end of a hurricane. 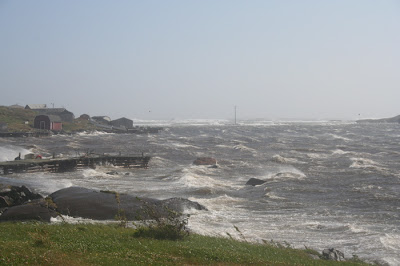 Undaunted, but somewhat impressed, we set off down the (blessedly paved) highway to L'anse Amour, our next port of call for plant hunting and staying. The surf coming in on the beach gave us some idea of what was up. A bit too much wind for doing any planthunting, that's for sure. 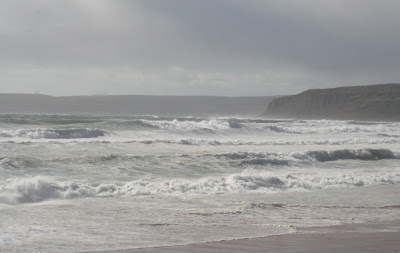 Since photographing plants seemed a bit out of the question, we went site-seeing. I'm very partial to lighthouses so we went to the Point Amour lighthouse, the tallest one in Atlantic Canada at 109 feet. 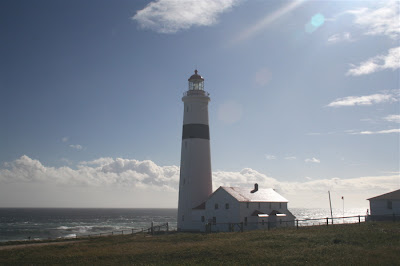 It has stood here protecting mariners of all kinds from peril from the sea for well over 100 years, so there was no danger of it falling over--still, we waited til calmer weather to climb it. I figured going up 120 or so steps to the top and watching 'green ones', or huge storm waves, would cause more than a little vertigo. The waves were impressive enough from the ground (from a safe distance). 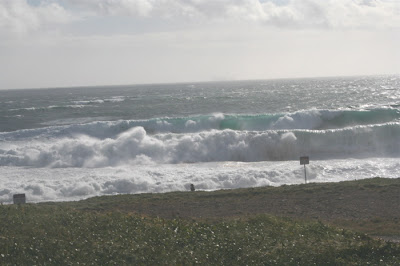 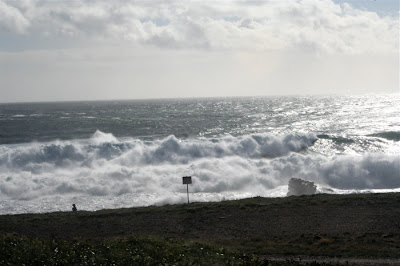 You may see a 'Danger' sign posted here on this cliff line. Is it to warn about waves? Eroding shorelines? Undertows? Man-eating seals?

Great.....My understanding is there is still, buried in the sand and rock along this part of the shore, some ammunition from a ship that went aground here earlier in the 20th century--maybe the Raleigh, a British warship from the twenties, or perhaps one from during WWll. It was strange to look at that sign juxtaposed with the tantrums of the waves.

This morning dawned clear, and breezy but less so, and after several hours of scrambling over the rocky cliffs and ledges below the place where we stayed, we decided a trip to the Lighthouse was in order. We climbed up with no problem, but the U2 song 'Vertigo has been in our heads every since. Incredible view, and magnificent structure...but we were happier when we had gone down a level or so. 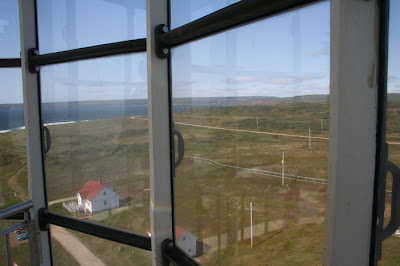 Some of us are now in Hawke Bay/Torrent River, and tomorrow are returning for a few hours in Gros Morne before trekking back to Port aux Basques and the ferry back to the mainland. We had originally planned to take the Labrador-Nfld ferry first thing this morning, but it was cancelled all day yesterday and first run this morning, and it wasn't until the 1800 crossing that we got on--(which was Plan B). A couple of us found the crossing rough, but I thought it was just great, (that's more proof I was a sailor--or a pirate--in another lifetime!) so I entertained my companions to keep them distracted.

It's nearly Garden Bloggers Bloom Day again, but I'll have to ask for dispensation to be late with mine, due to travel. I will get up some photos of plants we saw on our trip, and some explanation of Bakeapples, bearberries, partridgeberries and the like as soon as I can.

Hard to believe we've been here almost a week, and that our adventure is almost done. Some are still in Labrador, but others of us needed to be back, so The Fellowship of the Planthunters is dissolved and we're heading off in various directions. There will be lots to talk about (and blog about) for a long time to come yet, however). Stay tuned.....