Heath or Heather? Do you know the difference? 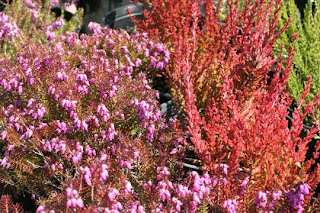 Someone asked in an earlier post--and I'm really tired tonight so can't go back to check--about the difference between heaths and heathers. I'm no expert on these plants, though I do love them and am slowly building a collection. But I can tell you a bit about them.

Heaths (Erica genus) and heathers (Calluna genus) are both members of the Ericaceous, or heath, family, which includes Rhododendrons, Azalea, Ledum (sometimes seen as Rhododendron) Andromeda, Pieris, Gaultheria, Vaccinium...all of which are acid soil preferring plants, woody shrubs, some evergreen, some deciduous.

Nova Scotia, like the rest of the Atlantic provinces, is mostly well suited to growing ericaceous plants because we have a lot of acid soil. The exceptions to that would be the areas with more calcareous soils, which are alkaline, such as around the gypsum quarries near Windsor. But with some regular soil testing and amending, gardeners can make their soil agreeable for ericaceous plants. 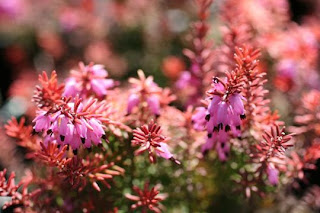 Ericas, or heaths, bloom in late winter to spring. Heath rhymes with Easter, which is how I learned to remember which flowered when. Heaths also have foliage that looks like little tiny evergreen needles. Of course, both heaths and heathers do amazing things with their foliage in fall to winter. This one, Mary Helen, is an Erica x darleyensis hybrid, and as you can see has fantastic colour. I bought this plant yesterday to celebrate Earth Day. No, not really--I bought it because I wanted it! and to go with it, a second heath called Darley Dale, because when I was cleaning up around my heath/heather bed, I realized I had more heathers than heaths, and I wanted to add more plants for bee and other pollinator encouragement. 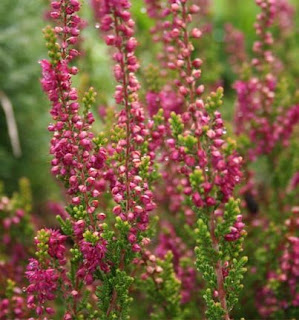 Heathers start to bloom generally in midsummer, and can continue throughout the fall. This particular beauty is Con Brio, I think--my labels have lasted well but I'm still getting mixed up with some of the varieties I have. Notice how the leaves of heather are more scaley than needle-like; that and their flowering period is mostly how you tell the difference between the two genera; and no one will scold you if you call them all heathers. At least, I won't. 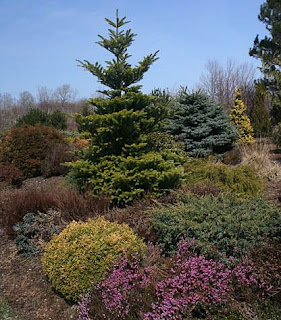 Both heaths and heathers work marvelously well with conifers, perennials including perennial grasses, broadleafed evergreens, and well, okay, most any other plant you choose to add to your bed. Just bear in mind not to plant things that will overwhelm the heath plants, which tend to spread out into handsome mats but not get too tall. This is one of the display beds down at Bunchberry Nurseries, and it may explain a little bit why I am so obsessed with evergreens, and urge others to try evergreens as well. I'll be writing more about them in future posts. 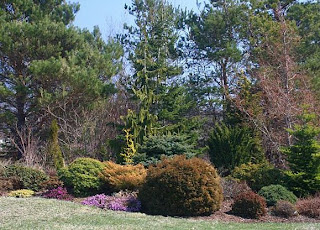 Another one of the display beds at Bunchberry. Jill will have a booth at Saltscapes Expo (only three days away! Ack! I'm not finished my talk preparation yet) so for those of you in the area, do drop in to the show on Friday-Sunday and see Jill. I plan to go back down in a couple of weeks and collect a few plants that I've been salivating over. It's just hard to decide on ONLY a few...one must pay other bills and so on. 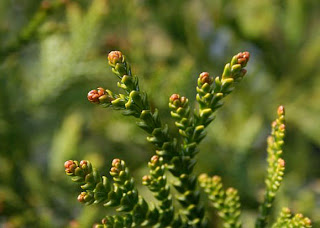 I leave you with a bit of a puzzle. Last year, this was one of the plants Jill brought to the Expo. I took one look at it and went into complete and utter plant lust mode. It's not the most showy of plants in the garden, but it's strikingly different, and one of the reasons I think conifers and other evergreens are so interesting. Talk about texture. This is a fascinating plant, and doing very nicely in my garden. Well, yes, of COURSE I had to have it! I'll post the answer with my next post.