The Lost has been Found! 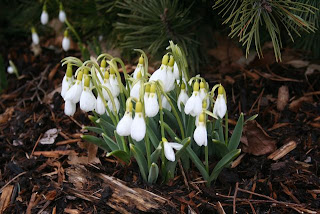 With apologies to Lewis Carroll, Oh frabjuos day! Callooh, callay, she chortled in her joy. After all that waiting, and fretting, and longing (and even threats to post a Lost and Found ad on Craigslist)...spring has decided that yes, she DOES remember where Scotts Bay is. This afternoon, the temperature got up to 62 degrees F here at our place (especially out of the wind). The glacier is melting with great enthusiasm, and suddenly, as LSS told me yesterday, there are sprouts of green growing things everywhere.

Despite not feeling real well, as I try to dodge another bout of diverticulitis, I did go outside and work for two whole hours, cutting down dead stocks of perennials, raking gravel off beds (where LSS dumped it when plowing the massive drifts of snow we did have over the winter), trimming a few shrubs, and even pulling some perennial weeds (ground ivy, willow herb, couchgrass and chickweeds). And I WAS amazed at how, despite the snow and wind and cold and snow and--well, you know what we've endured this winter--the perennials are poking up through quite nicely. Shoots of new growth included

There was probably a lot more, but I didn't explore too closely. In keeping with my determination not to get overwhelmed with all the tasks that need doing, I am sticking to the mantra of 'One Bed at a Time' as I clean up and study what needs moving, dividing, and so on. Please remind me of that when I DO invariably get overwhelmed, okay? 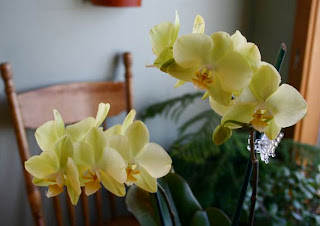 I know I left some of you hanging when I hinted at new plant purchase yesterday while in Truro. So without further ado....look what happened! It SPOKE to me, pleading to be brought home and rescued from the cold unfeeling staff at the big store, and the customers who don't know the difference between live and plastic plants. So what could I do? 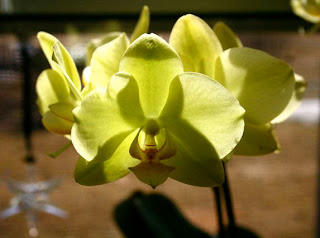 This phalaenopsis was unlabeled as to cultivar, but it's green or greenish yellow, depending on how the light hits it. It'll keep my other two company just fine, I'm sure. 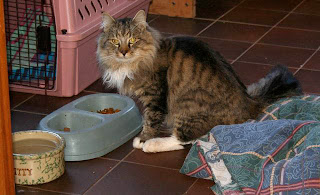 In other news, thanks for your good wishes and support of our decision to keep Rescue Kitty. He's gaining weight and isn't dehydrated now, he's using the litterbox though he has to remember about covering things, and while he's still in seclusion, I hope sometime this week to let him out more into the rest of the house. He's still very thin and quite weak so I don't want him to argue with one of the other catchildren and get hurt. He's a funny boy, very loving but also talks and mutters a lot, and his little feet seem to hurt him. He probably traveled a long way before finding our barn; his pads do look worn but his nails, though short, aren't worn off. I'm slowly working at getting the tangles from his coat, and he IS definitely a handsome boy. And I think his name is Dexter, but I'll let you know when he tells me for sure.