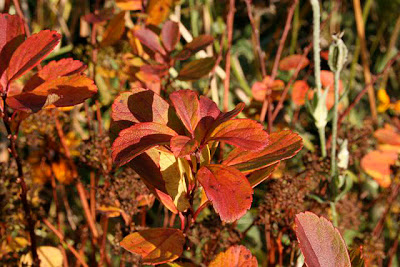 Between watching the kerfuffle over Noel the storm and doing my usual things, I had nearly forgotten that today is Guy Fawkes Day, also known as Bonfire Day. If you don't remember, Guy Fawkes was a notorious plotter who with a cohort of others planned to overthrow the Protestant Monarchy in 1605 by blowing up the houses of Parliament. Before he could carry out his nefarious deed, however, he and his cohorts were arrested--allegedly as Fawkes was about to light the gunpower with which he planned to blow up the buildings--and were tried and executed in early 1606. Actually, Fawkes jumped from the scaffold where he was to be hung, drawn and quartered--talk about overkill!--and thus escaped the fate of others in the conspiracy.
Tradition says that bonfires of celebration were lit in Britain in relief that the plot had been foiled. In years following, effigies of Fawkes were burned on the bonfires, and the tradition has continued now for four hundred years in parts of Great Britain and the Commonwealth, and most curiously (to my mind) in my home and native land of Newfoundland.

I don't remember why it is that Newfoundland (and possibly Labrador) has seized on Guy Fawkes night, which they tend to call Bonfire Night, with such enthusiasm, but it's long been the case. But since it's been many years since I've lived in The Rock of My Heart, I seldom think of the celebration. But earlier today a friend emailed me about Guy Fawkes, and it prompted me to take this little trip through history.
I'm not inclined to light a bonfire, but instead, I walked around the yard this afternoon and looked at the foliar fireworks that are still taking place in spite of this weekend's stormy weather. Most of the hardwood trees around have turned from bright colours to the browns and siennas and ochres of pre-dropping leaves, but some shrubs are still clad in their autumn finery. The Tor spirea at the top of this entry is among my favourites; though I'm planning an entry--and a challenge to fellow bloggers--later this week on a modified NIMY, in which one spirea will play a role, Tor is a definite autumn star. 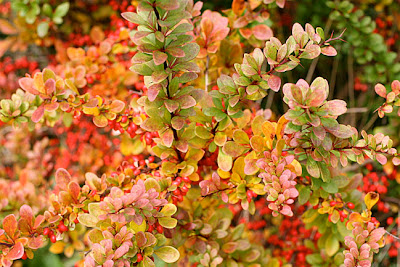 I regard barberries as among the finest shrubs around. To my mind, they are foliar fireworks all year round, whether in winter, where their naked branches bristle with thorns and remain festooned with crimson fruit, or in summer where they show their finery in an assortment of shades. But autumn is when they leave me breathless with glee, because they show so many colours. This is simply the green Japanese Barberry, flaunting its way through another remarkable show of colour. 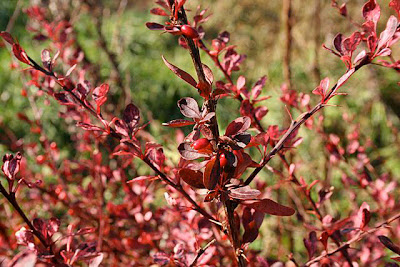 And this, on the other hand, is the always-dramatic Rosy Glow; interestingly, I have two specimens of this cultivar, and one is changing colour, while the other is showing its usual remarkable purple/pink and burgundy foliage, along with a few jubilant red berries, of course. 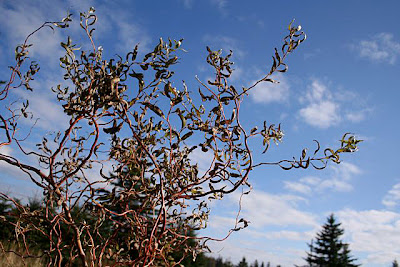 Although not as brilliant in colour as the barberries and spireas, I include this twisted willow (Salix matsudana'Tortuosa') because of the gleeful explosion of its branches, curled and kinked and spiraled; the wind has twisted what leaves still remain into equally contorted shapes, and I'm actually looking forward to seeing the leaves gone so I can admire the shrub, which has put on a lot of new growth this year. Most of the euphorbias are still holding their own, including this huge specimen of Chameleon euphorbia, which turns some of the most remarkable colours as we go through the gardening year. I love how most of it is now in shades of gold, but one dramatic purple cluster of leaves and bracts still remains. 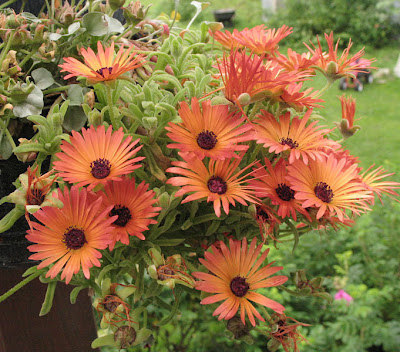 Gina at My Skinny Garden liked the ice plant I showed yesterday; here's another plant in yet another of the amazing flower colours; not quite as neon as yesterday's plant, but I shall do a post on the delights of ice plants in the future. They look like fireworks to me and are essential in my summer garden--though obviously they haven't realized it's November and they can stop flowering now! 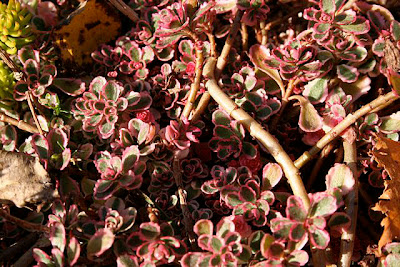 To round out the foliar display, this clump of low-growing sedum caught my eye this afternoon as Tigger and I inspected the garden. Like the ice plant, the sedum is oblivious to the fact that it should be quieting down and going dormant, and is producing richly coloured new growth--tiny new florets of leaves, not the huge explosion of colour of the barberries and euphorbias, but still, a rich and wonderful burst of colour. We thought it was quite marvelous, but when I tried to get closer, Tigger came into the photo, casting shadows and reminding me that he felt it was time to go in for tea. Which we did!

In communities throughout Newfoundland this evening, people will be gathering to light bonfires, drink hot chocolate or coffee and enjoy the cameraderie of an unusual autumn tradition. I'll content myself with lighting a candle here in my office and sharing these foliar fireworks with you all.