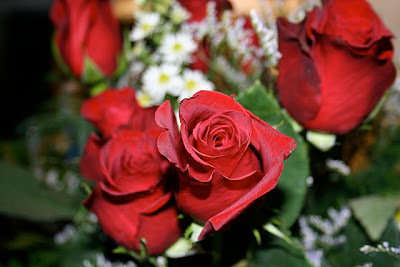 I know, I know, this is usually a blog about gardening...so before I start this love story to my horse, here's some flowers. Hmmmm. Red roses....where could those be??? 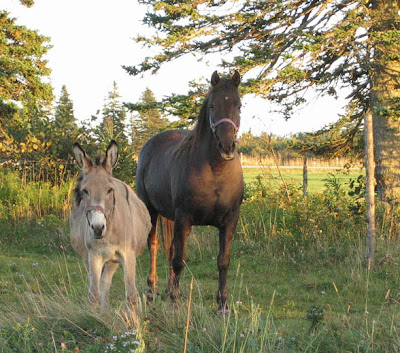 One of the members of our family is Leggo My Eggo, my 11 year old Morgan gelding. He's a BIG Morgan, an old-fashioned sturdy one, not one of the little peentzy ones that look like Arabians. His dad was Equinox Admiration, one of the stallions that came from East of Equinox Farm in Vermont, although he lives in Nova Scotia. I got Leggo when he was just four and called Teddy. He was grumpy from being taught reining--he's a Morgan, after all, and they tend to be bright but to mature later than some...and he didn't like his owner anymore. I took one look at him, rode him a couple of times, and knew he was the horse i'd been waiting for my whole life. I made a deal with him; I'd never show him (and he's very show-quality) and he would never live in a huge barnful of horses again, and in return, he wouldn't buck me off. 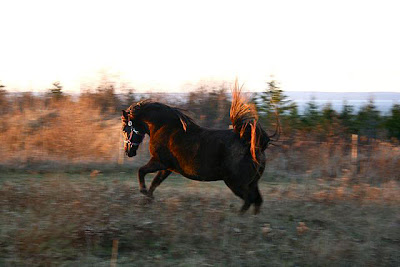 We've kept that deal, but that doesn't mean he can't buck in the pasture. We were playing 'fierce wild horse' today, a modified game of tag that only Leggo and I understand. It's a bit like free longeing; I don't bother with a longe line when we do this because he listens pretty well without one. 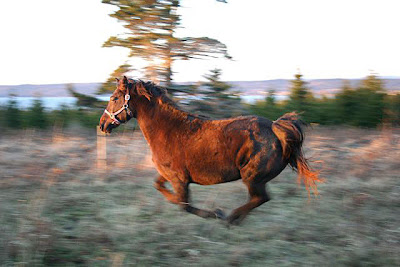 The object of this game is for him to race around the paddock, either trotting or cantering or galloping (or flying). I took these photos this afternoon, so he's not his shiny sleek self. He's a hairy, fuzzy, and very muddy boy, but a happy one. 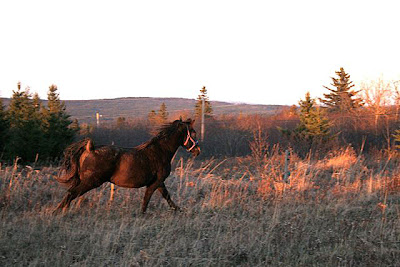 He cranks his tail back over his rump when he's happy (and he's usually very happy.) I say it's to fire up his jet propulsion system. 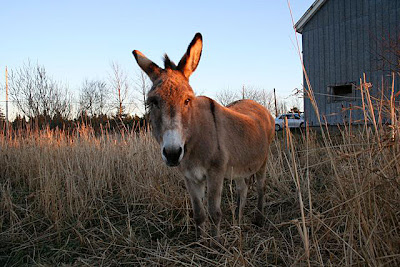 While JennyManyLumps, our donkey-from-Mars, sometimes joins in and gallumphs around a little bit, she usually watches these performances with this sort of expression. "I don't think so! I'm twenty seven years old..that makes me eighty-something in human years!" 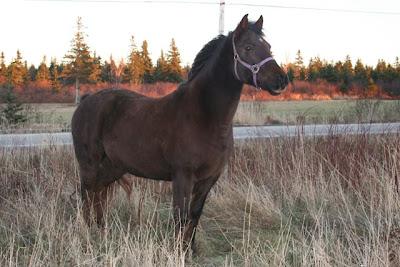 And when it's time to stop playing, "Whoa" usually works very well. There's always the chance, when Alpha Horse (me) says whoa, that there are treats in my pocket. And Leggo loves treats! 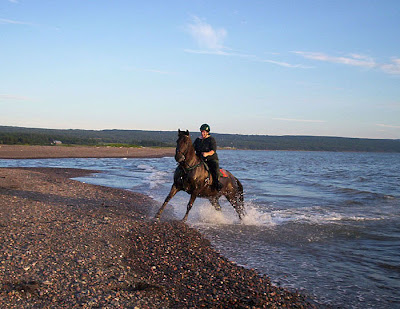 Leggo is what you would call 'trail safe." While he gets offended at birds in bushes and at grasshoppers, and is very curious about cows, he is unphased by tractors (with plow, mower, bushhog or baler on behind), combines, motorcycles, four-wheelers, semi-tractor trucks, dump trucks, or even asinine drivers who blow their horns at him. I take him in the woods, down the road, along the beach...and during warm summer days, into the water. He's a good swimmer, but the most fun is when we come bursting up out of the water! We're not swimming these days, though. 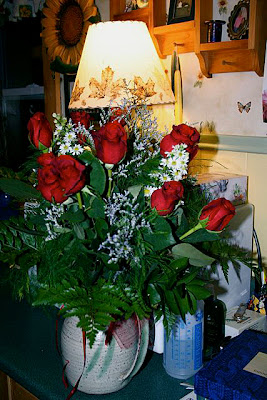 Oh, about those roses? Well, my longsuffering other half thought I needed some cheering up to get me through the rest of November...Have I mentioned what a rare jewel he is?

Email ThisBlogThis!Share to TwitterShare to FacebookShare to Pinterest
Labels: horses