Chocolate whales and flowers all over 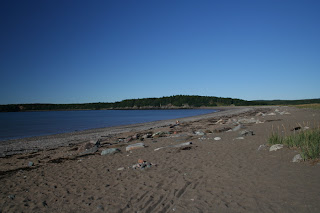 Day two in my New Brunswick Excellent Adventure. I slept pretty well last night (a major accomplishment for a person with fibromyalgia and other assorted pains) and while I didn't sleep exactly sideways, I made full use of the space--and the pillows.
First stop on my adventures today was the Irving Nature Park. This is an amazing gift to the residents of Saint John and surrounding environs, by the Irving family. The company's website tells it best:

Irving Nature Park, a 600 acre (243 hectare) site, was created by J.D. Irving, Limited to help protect an environmentally significant, endangered area. This special part of the Fundy coastline, minutes from Saint John, a major urban centre of New Brunswick, is now a place where the public can enjoy and experience the various ecosystems of the Southern New Brunswick coastline.

The peninsula of volcanic rock and forest on the Bay of Fundy is swept twice daily by some of the highest tides in the world. Mud flats and salt marsh are along one side. A long sandy cobble beach is on the other. The area nurtures one of the province’s richest marine ecosystems.

The Irvings maintain the site; sending their own people in to clean up and maintain the park, patrol it...and there are even picnic sites with gas barbecue grills that families can use--not parties, just ordinary families) to cook their meals--with the propane supplied by Irving, of course. And the site IS gorgeous, and well used. Good to see that Saint Johners love their parks--they have quite a few great green spaces, including the marvelous Rockwood Park, and smaller parks throughout the city, too. 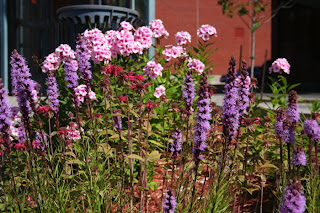 After a few misunderstandings with signage and two unneeded trips across bridges before I got in the right direction, I landed in the downtown centre of Saint John; this is where the cruise ships come in, and also where exist some unique shopping experiences, including Brunswick Square, Market Square, and the City Market. I'm not a great shopper (except for plants and books, of course) but I did roam through the areas then went outside to look around at the parks and walking areas. There are a LOT of gardens tucked in here and there, with some pretty nice perennial mixes 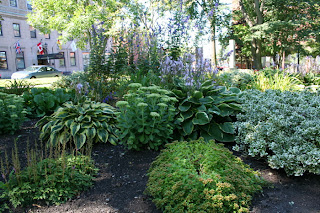 As well as beds of annuals, that are looking just terrific. Shirley, my affable host from Saint John Tourism, explained that the department that looks after public plantings in the city are terrifically dedicated, and that's obvious; the annuals are well deadheaded, watered and fertilized, and are still rich with all kinds of colour. The perennials include a nice mix of bloom for the whole season, and new beds have been planted near the waterfront where a new walking trail is being developed. My favourite garden story, however, is about the marigolds. 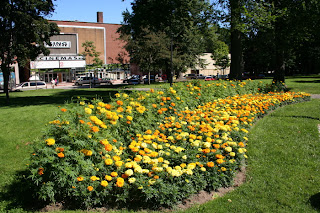 My friend Carol Matthews wrote about this for Canadian Gardening at some point, but this was new to me. Every spring, schoolchildren in Saint John plant marigold seeds, and then these are transplanted into long meridian beds along Main Street. There are several great things about this: it provides a showstopping band of colour along a very busy thoroughfare, true; but also, it teaches children about growing flowers from seed, and reconnects them in a small way with the marvels of growing things, so that they also can understand more about where our food comes from. You're never too young to learn about gardening, right? 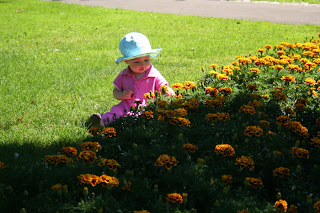 After a fine lunch at Billy's Seafood, we were met by Deputy Mayor Michelle Hooton, who told me more about the history of the city and of its restoration projects, then graciously took me to see her courtyard garden. 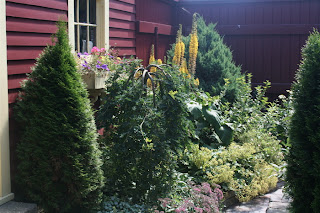 Many houses in Saint John front right onto sidewalks and have no front garden space to speak of, but have nice back yards which they wall off (in many cases) and plant with perennials, shrubs, and small trees, incorporating the larger trees that already exist in the downtown area. Many of the houses are made of brick, because they were built in the months and years following Saint John's Great Fire of 1877, and the architecture is wonderful to see.
We walked around a lot of the historical part of the downtown, and it was fun to see how any little bit of soil was promptly planted by homeowners or tenants. Heck, I even found a place where goutweed was a good idea--and nicely controlled by a brick wall and a cement sidewalk! 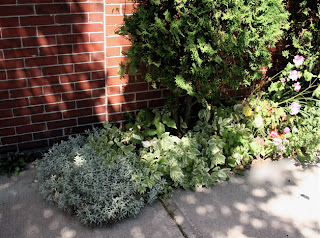 Civic pride is really obvious in this city, and it's fun to see how when one homeowner fixes up a home and plants a yard, others around the area begin to do the same. 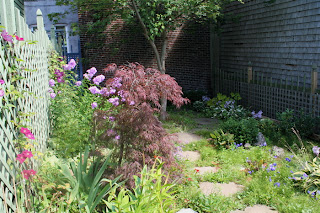 At length, I bid my gracious hosts farewell with many thanks and set off on the hour drive to Saint Andrews 'by the Sea'. Located on Passamaquoddy Bay, this town has a history dating back to the American Revolution, when Loyalists relocated from the States to what is today Canada. St. Andrews is primarily a vacationer's paradise with many seasonal residents and visitors, lots of whale watching cruises and other recreational delights. (Golf, if you like it, which I don't, hiking, shopping, and of course, Kingsbrae Gardens, where I'm going tomorrow! So I won't tell you more about Kingsbrae right now other than it's one of my favourite public garden spaces--and one of the top ten Canadian public gardens, too!). But all of St. Andrews is a garden, in my mind. 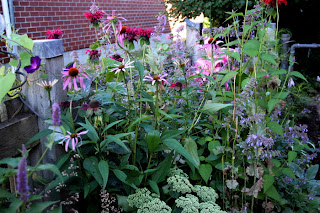 My home away from home for this night is the magnificent Fairmont Algonquin, surely one of the jewels in the Fairmont Crown. I've stayed here several times before, and am always delighted by the incredible customer service. Everything about the Algonquin is about satisfying guests, and they do it without being ostentatious or intimidating. Look at the care package that accompanied my press kit in my suite (featuring two queen beds, a kitchenette, and a view of the grounds...) 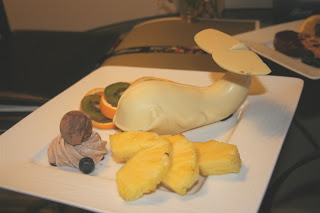 Do not adjust your screens. That's fresh fruit, handmade chocolates, and a white chocolate whale, along with biscotti and more fresh fruit. Well. Despite the fact that I had one of the nicest meals I've enjoyed this year at the Passamaquoddy Dining Room (one of four restaurants at the Algonquin...) I don't think the whale is going to be observed on any whalewatching cruises. Nor would he survive a trip back to Nova Scotia; it's still pretty warm weather, and we don't want him to melt...