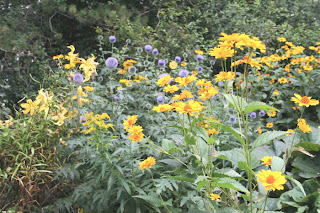 I was supposed to be a veterinarian.

It's true. The plan was to go do two years of pre-veterinary (the first two years of a B.Sc.in Agriculture) at the Nova Scotia Agricultural College (also known as NSAC), then be off to Ontario Veterinary College at Guelph. I had scholarships, was really good in biology and a few other subjects, and thought it was all going to be just as planned.

Well. Things don't always work out as planned, do they? I hit an obstacle called Calculus. It might as well have been Russian. Heck, I would have done better in Russian, no doubt. After failing to grasp the concepts of calculus not once, but twice, I conceded defeat, and switched to plant science.

It's probably just as well. I would have ended up bankrupt but with seven thousand, four hundred and fifty seven cats, a couple of dozen (nice) dogs, eight hundred and twenty three rescued horses, and an iguana or two, no doubt. (No goats, and definitely no miniature horses, though. These things are just annoying.)

So I did plant science, worked in agriculture for a while, did some other stuff, got married, had child, blah blah blah muffin, then went to Acadia just because it was nearby. Collected two degrees from there in English, and somehow along the way started writing in earnest. And getting paid for it. Oh, and of course gardening my butt off. The rest, as they say, is history. I'm still proud to be an Aggie--and still remember our absurd (and rude) cheer. 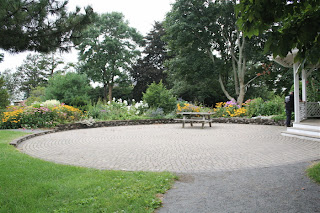 Click on all photos to enlarge for detail and colour)
Yesterday being gardeners mental health day, we headed off on a little road trip, and since we hadn't been to Truro in a while, went to AC to check out the gardens there. First we went to the Alumni gardens for a look around. The college colours are blue and gold and while that bed IS winding down, there were still some late-summer blue-and-gold flowers happening. I love the big round courtyard, with bandstand/gazebo, and the long sprawling bed of perennials beside it. 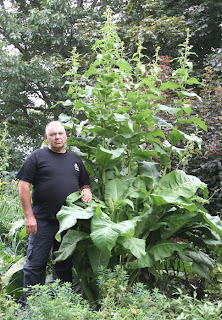 In the blue-and-gold border, we found Inula that impressed even us. We have it here, and it has grown to about 6 feet but with some shade. Here's what it does in full sun! My long-suffering spouse is six feet tall. The inula is somewhat taller than he is. 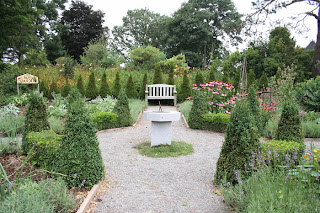 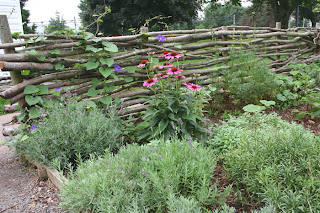 There's a lovely quad garden with four separate sections, and a lot of herbs, some clipped box and evergreens and lavender; and this amazing woven fence. They've obviously just replaced it as there's a pile of saplins laying nearby. 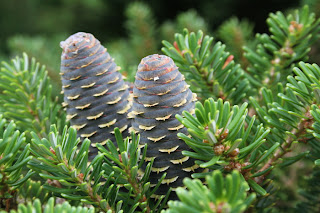 One of the conifers I don't yet have (one of many, but one I really want) is the Korean Fir. It's a beautiful thing all year long, and then there are its cones, which are shades of purple and blue. 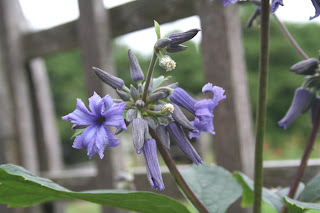 This was growing alongside the big pergola in the upper part of the Alumni Gardens. I've never seen it before--anyone know what it is? (this is obviously my week of mystery plants.)

Across the road, we went to the NSAC Rock Garden. Completed last summer after about 4 years of work, it's my favourite garden in the province (even more than my own). There are gazillions of choice plants there and you know what? I don't know what a lot of them are! And that's delightfully exciting, because it just means that there are all kinds of things that I can still try here in my own garden--when I have room, of course! 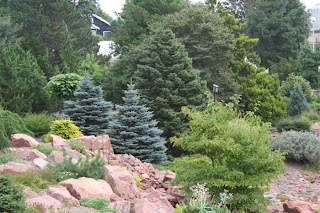 I mentioned in an earlier post that I love conifers, and here's a good reason why. A collection of lovely healthy trees and shrubs in a range of colours and textures. Some of these were already here when Dr. Bernard Jackson (who was formerly at MUN Botanical Garden in Newfoundland) began his labour of love along with the Friends of the Garden and help from the hort. crew and students at AC. I forget how many tons of rock were brought in and how much earth was moved to create this--but it's a masterpiece and worth a trip to Truro anytime you're in the mood. 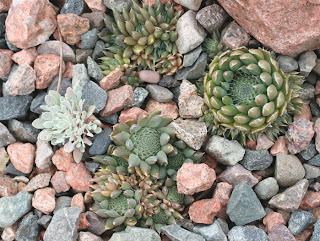 This is part one of my postings on AC; because there are so many photos to show, and I have to dig up some from earlier in the season to further colour things for you all. What I really love is the contrasting sizes and shapes and textures. We have huge, mature hardwoods and conifers, then there are trough gardens with loonie- and nickel-sized plants some sort of alpine/succulent, and I don't know what it is--but I love the textures here! 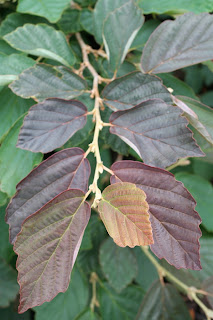 I got very excited when I saw this shrub--it's a witch hazel, Hamamelis, and I don't know if it's a cultivar or the native--BECAUSE SOME IDIOTS KEEP STEALING THE NAMETAGS FROM PLANTS IN A PUBLIC GARDEN!!!--yes, that was a mini rant. Whew. Anyway, I went home and looked at MY Hamamelis and told it I hoped it was planning to turn such marvelous colours too. I am assuming this is a countdown to autumn foliage change. We all know it's coming....

Part two after I finish another deadline that's urgent.....