grasses, a bridge and a whirlpool tub... 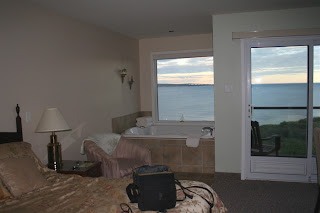 Ah, this is just deliciously relaxing. King sized bed (meaning I can sleep sideways, hog all the pillows, and no one will complain. A view fit for a queen, of a garden, a beach, and a shore, with the music of the water on the rocks to lull me to sleep. And oh yes, a whirlpool to tend to the aches and pains of a gardener's decrepit body. Can it get much better? 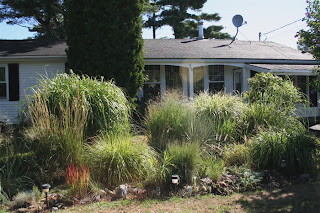 My day started off with a drive to Greenwood, home of 14 Wing, an air force base where my father flew out of when he was in the Royal Canadian Air Force, before I was born. I wasn't visiting the Wing today, though; my first stop was at Tony Chaulk's garden. Tony has an ideal nature-lover's garden, inviting for birds and bees and butterflies of all sorts. He's especially fond of perennial grasses, and has something like forty different species and cultivars, including many I've never tried to grow--yet. He's inspiring me to, though. 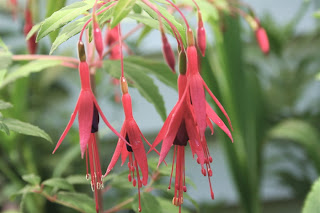 Tony likes to push the zones, planting things that are marginally hardy for his part of Nova Scotia. He's doing very well at it, though; among his accomplishments are hardy fuschias, a palm, and a mimosa. He also has had Cape Fuschia overwinter, which tempts me to try to overwinter mine outdoors this year--planted out, though, not in a pot. 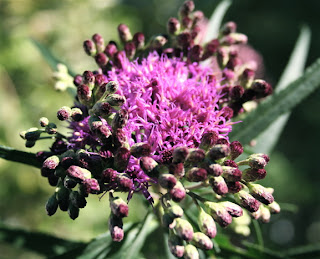 Tony has lots of shrubs, trees and perennials that butterflies and birds like; joe pye weed, phloxes and monardas, honeysuckles, and the very attractive ironweed. This is a wildlife gardener's dream, and he does it all in the confines of a n average suburban yard. I was delighted, and will be back again. 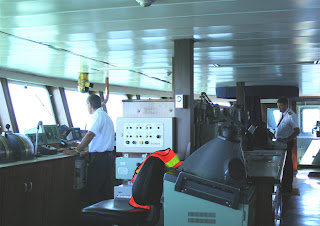 From Greenwood I headed on to Digby, and the Princess of Acadia, Bay Ferries vessel for the Digby Saint John trip. I was wandering around on one of the outer decks when I heard my name called, asking me to the purser's office. He told me the captain wondered if I would like to come to the bridge for a visit? Who, me, the freelance sailor? Lead the way, sir! 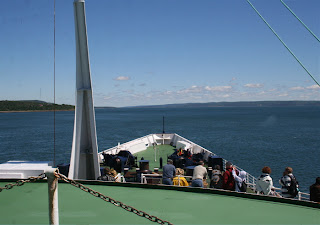 On the bridge I waited quietly as Captain Kenneth Smith was just taking the ship away from the wharf, calling headings to the quartermaster steering the great vessel. The bridge is, of course the nerve centre of any ship, and while this one doesn't have huge numbers on duty at any time, it was fun to watch them bring the ship out of the somewhat secluded bay that is Digby's harbour, and out into the rollicking heart of the Bay of Fundy. Captain Smith graciously toured me around to show me the upgrades that Bay Ferries had made to the Princess of Acadia while she was in drydock for three weeks, and she looks like a brand new ship, with many amenities from large screen televisions, internet service, and even a supervised play area for small children, as well as a cafeteria and cafe. Lots of seating room in several lounges, plus outside on the decks, and after I left the captain I sat reading in the large lounge on the main deck, with my iPod plugged in so as not to listen to other people's conversations. The ship is very comfortable, (but we know I have a soft spot for sailing on ships anyway!) and the three hours of the trip passed quickly.

I don't know why anyone would drive all the way around when there's this marvelous ferry; it cuts a lot of driving time for many travellers, depending on where you're going in NS or NB (it would have taken me 5+ hours to drive to Saint John, where this took me about 90 minutes to the ferry!) We have to impress upon that band of jokers in Ottawa and Halifax that call themselves our leaders that this ferry is an essential service, and they have to help keep her in service. *yes, that was a mini rant, if anyone was wondering.

After getting off the ship at Saint John, I wasn't long heading to the Inn at the Cove where I was booked in. Originally I had been going to join the Inn's owners, Ross and Willa Mavis, at their country home where they were hosting a potluck party for other PWAC members, but I decided that my room just looked too tempting. A quick supper and a drive to look at the Irving Nature park, and here I am, back for the night. Now with my 'report' made to all of you, I'm about to do some reading and then see about sleeping sideways in that bed! And I can hear the waves tumbling stones on the beach now. Night.....zzzzzzzzzzzz 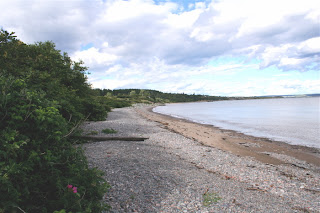