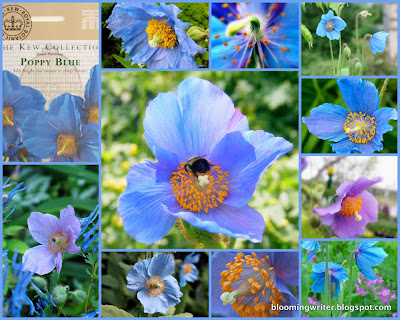 My love affair with the elusive, challenging, maddening but oh-so-exqusite blue poppy began more than a decade ago, when I first started seeing them regularly in gardening magazines. One magazine featured the graceful flowers on the cover, and I think I still have it here, buried somewhere in the piles of magazines that live in my storage office. How could anything be that blue and be a flower? I just knew that one day, I’d have to try my hand at growing them. 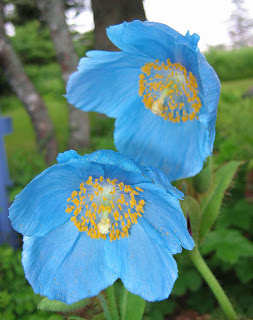 Well, as many of you know…I do okay with them. Not great (no waving vistas of dozens of meconopsis here) but well enough that they're sort of a signature plant for me. There have been challenges, that’s for sure, as I wrote in the incredibly sad and all too true tale of woe to do with ducks and blue poppies. But this post isn’t so much about my own experiences with them as an information piece for others. I’m not an expert. The genus IS quite complex. But I’ll share what I’ve learned, and hope it helps others determine whether or not they can grow these marvelous, seductive bloomers. And I'll always cheer on and celebrate others who succeed with these bratty bloomers.

The genus Meconopsis is in the family Papaveraceae, but the plants we refer to as blue poppies aren’t actually poppies at all (poppies being Papaver genus, where there are no true-blue flowers). Now, we can go into all the botany, but I sense eyes glazing over, so instead I’ll refer you to the Meconopsis website where you can learn more about the differences between Papaver, Meconopsis and other members of the same family. 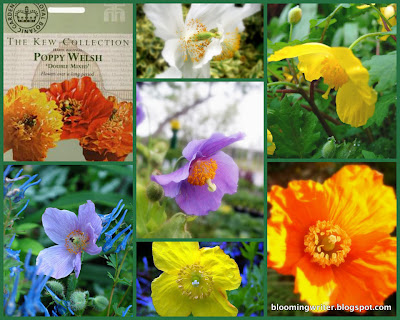 Not all Meconopsis are blue, either. M. cambrica, which I’ve never grown, is yellow-flowered, occasionally orange; several have lavender to purple blossoms, others come in red, rose, yellow or white, and even the blues come in a variety of hues. I’ve had M. b. ‘Hensol Violet’ before, but it apparently didn’t like growing for us because it didn’t return. Or perhaps it was monocarpic. More botany coming along now, so deep breath, and look at this lovely flower before we proceed. Ready? 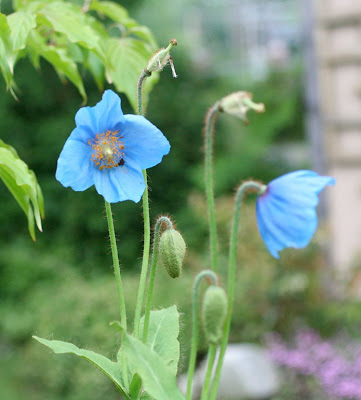 Monocarpic plants flower only once in their lifetime, though they may live for a few years before they get around to flowering (and dying). Some have evergreen foliage, others are deciduous, and most of the monocarpic species aren’t usually seen for sale, at least around here. That being said…the perennial forms do sometimes behave in a monocarpic way. I sometimes think that these plants are related to cats, and do things just because they can. With the perennial forms, some set seed, and others are sterile. And sometimes if pollination is off, even the fertile types don’t set good seed. Whew! Are we confused yet? Let’s look at another flower…. 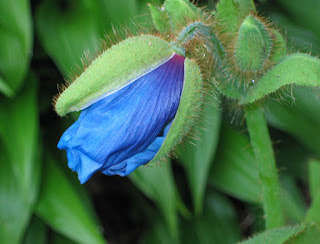 Don’t worry, there’s not a test…but are you seeing why the genus is at once loved at the same time as many gardeners are intimidated by them? It’s a confusing group of plants, but we love them in spite of their moodiness. Just as we love certain naughty, moody felines.

Experts estimate the number of species of Meconopsis as between 40 and 50, but most of what we find in nurseries are interspecies hybrids. And we all know how much information many labels give, and how plants can get mislabeled. Often M. betonicifolia is labeled as M. grandis, maybe because it’s easier to spell and say ‘grandis.’ For the most part, the species and named hybrids we DO see in these parts are:
M. betonicifolia
M. grandis
M. nepaulensis (monocarpic, with red or yellow flowers rather than blue)
M. X sheldonii
M. ‘Lingholm’
M. simplicifolia
M. ‘Hensol Violet’ 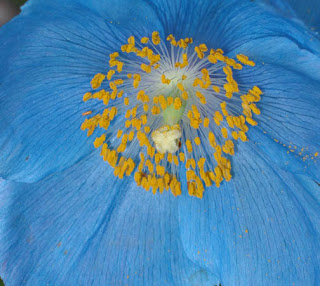 The reason that Meconopsis do reasonably well for me here is that foggy, wet, cool, (although sometimes annoyingly windy) climate of ours suits them well. They don’t like heat, either when they’re germinating or when they’re growing. Ours are situated in the shade bed near, believe it or not, a line of spruce trees. They don’t get much sun, and they’re in a spot that’s a bit higher than much of the bed, because while they’lll take cold, they resent having their crowns get too wet. Meconopsis has a reputation for being a heavy feeder, and each spring the area where ours are gets a good dose of seaweed fertilizer, some composted manure, and some mushroom compost from an organic producer. In late fall, I throw a few evergreen boughs over them, or some hay, to catch and hold the snow and also to prevent the freeze-thaw cycles. 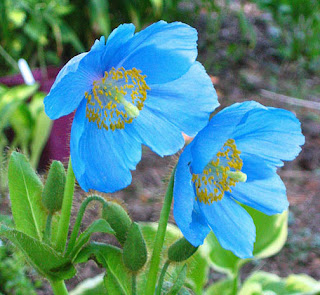 I haven’t grown any from seed for a few years, ever since the great duck fiasco. Although I grew mine indoors (in our not too hot living room), apparently the best way to grow them is to wintersow them. The best success comes with fresh seed, so hopefully if seed has been foil packaged and stored properly, it will be viable. But with these little monsters, you can seed 500 cells, get maybe 200 seedlings…and have 25 or so survive. They are just crotchety! One valuable tip is to grow the young seedlings on in a coldframe for a year rather than plant them out when they’re tiny, flimsy things.

We currently have four or five plants, most with multiple sections to their crowns. They come and go; sometimes one or two will just arbitrarily up and die, usually over winter, probably because of just one too many freeze-thaw or soggy sessions. I don’t keep track of losses, but I do usually tuck another plant in each year—if I can find ‘Hensol Violet’ again this year, I’ll try it again. 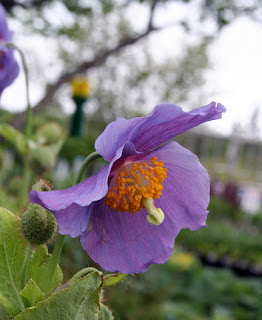 The problem is, some nurseries have almost as much challenge with keeping the plants looking good as some gardeners do. The best plants I’ve seen were at Bayport, (because Dick Steele could grow anything anywhere, including the Antarctic or a desert) and at another nursery on the south shore that had a nice shady lath house for its shade-loving plants. We’re a long way from having the waves of blue flowers that you see in some places, such as in Les Jardins de Metis in Reford, Quebec…but we’re a work in progress.

If your climate is hot and muggy, or hot and dry…you’re probably out of luck with these dizzyingly lovely but cantankerous plants. But if there’s a nursery nearby selling them, and they’re not too expensive, and you can give them a cool, shady site with ample moisture and organic matter…well, what the heck, give it a try. They can surprise you…and the efforts are definitely worth it! 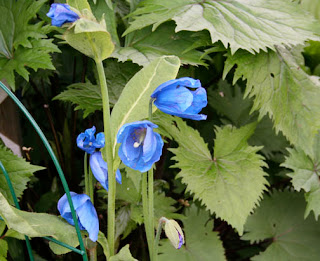