Sir Mungus of Anjou and the Eagles 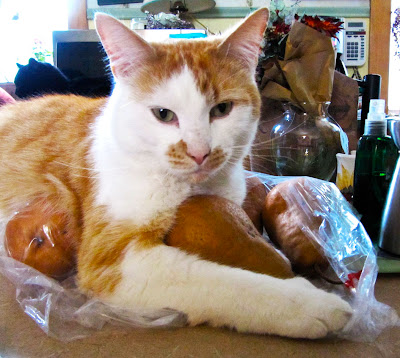 It's no secret to regular readers of bloomingwriter that we are owned by seven amusing cats, the most amusing--and I swear, intelligent--of whom is Mungus. Or, after his little performance yesterday, Sir Mungus of Angou. He celebrated the fact that I brought home some really fine Anjou pears from a local farm market by laying on the bag, nuzzling the pears, and sprawling ON them. 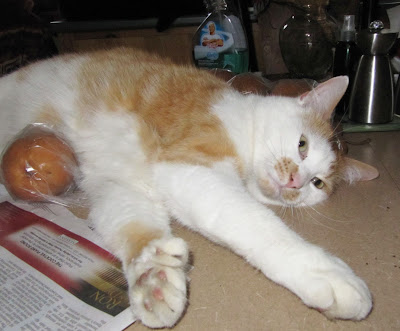 Now, If there was nowhere else in the entire house for him to lay and rest, he would throw a riotous hissy fit worthy of Garfield or Bill-the-Cat if we tried to prevail upon him to lay on the pear bag. I wasn't quick enough to snap him trying to bite one of the pears, but he decided that they were an ideal place to rest. Perhaps they are used for acu-pear-ssure and relieve the weary muscles of hardworking felines. 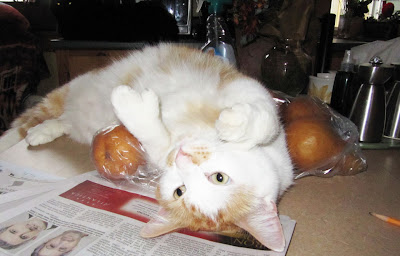 Did I happen to mention that Mungus is, PEARhaps, a bit of a ham-cat? He also likes to prevent the reading of the newspaper on a regular basis, which given the sad state of the newspaper really isn't a huge loss. 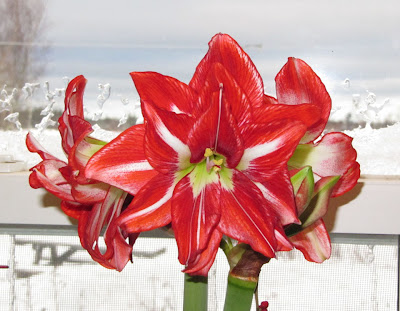 Since this is normally a garden-related blog, here's a gratuitous photo of Yet. Another. Amaryllis. This is the double-flowered Pasadena, quite a handsome thing, and likely as close as I'll ever come to the real Pasadena. Sigh. Sometimes it's hard hanging off the easternly edge of the continent. 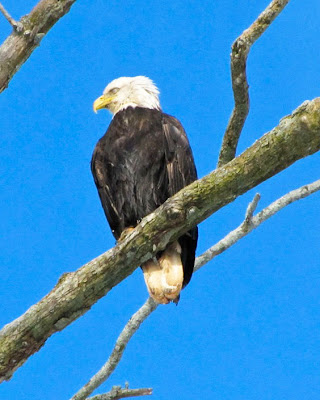 This coming weekend marks the kickoff of the 19th annual Sheffield Mills Eagle Watch festival. The festival runs for three consecutive weekends and is a great way for families to spend some quality time in the outdoors, observing some of the many bald eagles that overwinter here. This fellow was sitting in one of the 'eagle trees' located near a poultry farm, likely digesting his breakfast, when I came back from town this morning, and obligingly gave the baleful eagle-glare while I snapped his photo. Over here in my community of Scotts Bay, we have a few eagles that live here yearround (as a few do elsewhere in the Valley, while many go to Cape Breton for the summer/nesting months) but I never, ever get tired of watching eagles. Not ever. They may be our neighbour to the south's national bird, but we love them too.