Finally following up with my Foliage Followup 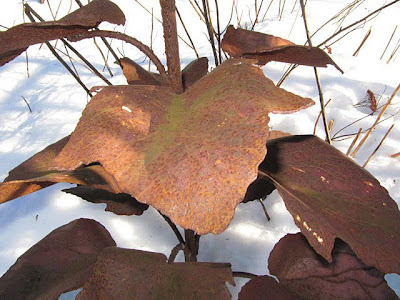 As many other garden bloggers can tell you, our good friend and fellow blogger Pam @Digging came up with the delightful idea for a Foliage Followup to follow Garden Bloggers Bloom Day. Since I was fashionably late with the bloom day post, it only goes without saying that I'd be behind the eightball with this post as well.

Let's start with this splendid leaf, shall we? Oh, what can that be from? Confused? You'll understand in a few minutes. 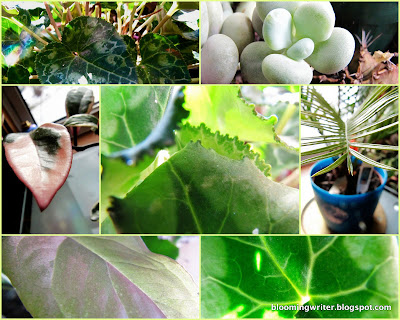 I don't have a huge number of really interesting-leafed plants indoors, but I did pick out a few that tend to particularly please me. The cyclamens are the best, with their various patterns of green and silver-appliqued leaves and their lacy edges. I like the first photo (top lefthand) because it also caught a bit of rainbow from a crystal snowflake hanging in the window, during a rare episode of sunlight on Sunday. So pleased was I to see sunlight that I spent a good deal of time just playing with the light on leaves, which looked variously like roadmaps or weird chlorophyll landscapes. My other indoor faves include a lovely succulent, several variegated hoyas with a LOT of rosy colour in their foliage, and an intriguing syngonium that came in a container stuffed with three other plant species and pleaded with me to rescue it. Oh, and the coolly dramatic posturing of my Cycad, which I adore for its prehistoric moodiness. 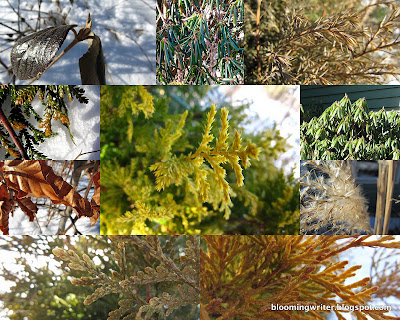 Outside, there's quite a bit more going on. When I created this montage, the program would not cooperate and put the rhododendron leaf photos beside one another. They're on the same shrub, an eight foot tall beast; the leaves that were basking in sunlight had relaxed and were looking almost springlike, while those in shadow were remaining sullenly, chillily rolled up in protest of winter. I know how they feel.

There are only a couple of deciduous trees/shrubs included; one is a fragrant viburnum, I think Burkwood, which has kept a few of its leaves; the other is my small copper beech, which hangs onto its leaves obsessively until spring. The other non-conifer offering isn't foliage, actually, but the flowerheads of Miscanthus 'Huron Sunrise', which I just included because I'm a rebel sometimes.

I've mentioned before that I really love conifers, particularly those with bright, interesting foliage; included here are a few of my favourites. Clockwise, from top righthand corner: Chamaecyparis 'Heatherbun';
bottom right, Thuja 'Rheingold';
bottom left,
Thuja 'Sherwood Frost', with its ivory tips;
second from top left, another ancient, fascinating plant, Thujopsis dolobrata, the only member of the genus Thujopsis.
Centre: One of my favourites just because I like to say its name: Chamaecyparis pisifera 'Plumosa Aurea Nana'.

Now, about that leaf at the top? 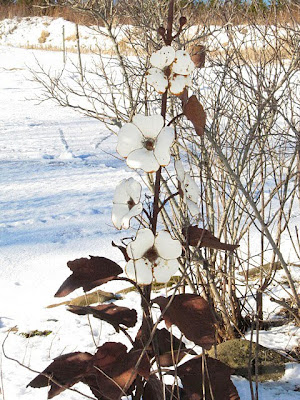 This is my answer to my ongoing trouble with hollyhocksp: I bought this sculpture of a hollyhock plant a few years ago, and it stands in the back garden, oblivious to all assaults of weather. It may not be botanically exact, but it doesn't die off from winter rot, or come out pink when it's supposed to be yellow-flowered, or any of the myriad other ways hollyhocks have sought to thwart me. Although I guess the oxidizing of its leaves give new meaning to 'hollyhock leaf rust', don't they?