This is one of those tales of woe that deserves to be shared.

One of my very favourite plants is the blue poppy, Meconopsis. It’s not the easiest plant to grow, as many of you can attest. Hands up, those who have tried and failed with the gloriously gorgeous, shimmeringly beautiful, almost too-blue-to-be-true Meconopsis?

I have my hand up too.

Yes, I’ve had them grow and flower. There’s one from our garden on the cover of my book. I have one on my business card, lovingly drawn by my uncle, a talented and generous commercial artist. This was chosen intentionally, because the blue poppy IS beautiful and exciting to have in our garden—and sometimes cantankerous too, and enough to humble almost any gardener. But it can be grown, and grown well, in Atlantic Canada.

I bought a package of seeds the second year we were here, determined to grow a Meconopsis for our garden. I had dreams of a whole patch of them, lovingly tended by me and my herd of helper-cats, dazzling passersby with their true blue colour so different from any other flower in the garden.

Three seeds germinated. And I coddled two seedlings along to a transplantable size that spring, although I was worried about their small size. Then one inexplicably threw a tantrum and died. There was I with one teeny tiny seedling. But it grew on, and I cosseted it in between a hundred chores and projects and other adventures.

Then one day, we were on a road trip on the south shore and went past a place that registered in my brain about five seconds after we drove by. “STOP!” I told my long suffering spouse. “Back this truck up, please!” Being the best spouse in the world, longsuffering or otherwise, he did just that.

We pulled into Bayport Plant Farm. For those of you who have never been there, GO! Bayport is awesome—the truly wonderful plant farm operated by Captain Dick Steele and his daughter Diana Steele, two of the absolute finest plant people in this country and probably the world. I was googling and ooohing and ahhhhhhing over some plants on benches that were for sale, and long suffering spouse had wandered off a ways. He came bouncing back to me, and said excitedly, “You’ve gotta come with me RIGHT NOW!”

I figured there must be a boat back there in the trees, because boats is what LSS loves the most next to me and the cats. But no….it was blue poppies. Lots of them. Many of them in flower. All nicely potted up and for sale.

We bought two, and a variety of other things. I was in heaven. We’d have blue poppies this very year, while my seedling grew on. Maybe we’d have (gasp!) seedlings from our plants? And what do you know, the climate in our windy foggy cool garden must be quite Himalayan-like, because the plants did very well.

Dear friends and gentle gardeners, we DID indeed have blue poppies, three or four flowers on each plant. 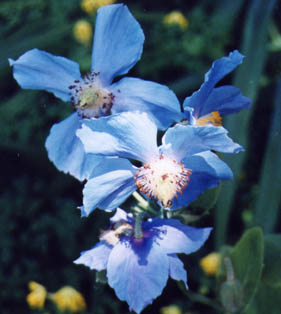 And then we had seedlings. A fuzz of little grey green, hairy seedlings, just like the three I had had from a whole package of seeds. I had also planted the one surviving seedling near the mature plants, hoping to inspire it to great deeds.

Then there were the ducks.

The year before, we had gotten three ducks, two hens and a drake, from a farmer. My dearly beloved LOVED ducks, and thought it would be fun to have some for the pond. We had a variety of challenges getting the ducks to produce ducklings initially, then Sweetie hatched out ten ducklings. They were so cute and busy and charming…

Until they grew suddenly into fullsized, somewhat voracious ducks that were given to going walkabout. One day, I chased the entire herd back up the road, as they were stampeding down the middle of the highway.

One day in late fall, they escaped from their lodging by the pond. When we found them, they were in the shade garden. The shade garden where the Meconopsis were. The shade garden that they had trampled, dug, eaten, shat in, trampled some more in their search for grubs or greens or something. Yup. Flattened those poppies flatter than a roadkilled snake.

The ducks left that day. No, we didn’t eat them. We simply loaded them into a poultry carrier and took them down the road to a fellow who had two large ponds and wanted ducks. We now admire wild ducks in our pond, and they’re fine and welcome. But no more ducks.

Happy ending, however. I got a few more young poppies a couple of years ago, and nurtured them carefully. This past June, when a plant with several crowns put up not one, but two stems of flowerbuds, we left it grow. And one week after my father died, the first flowers opened. 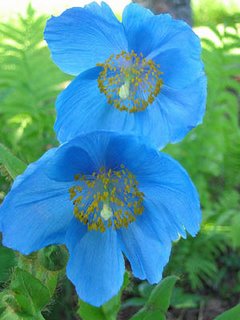