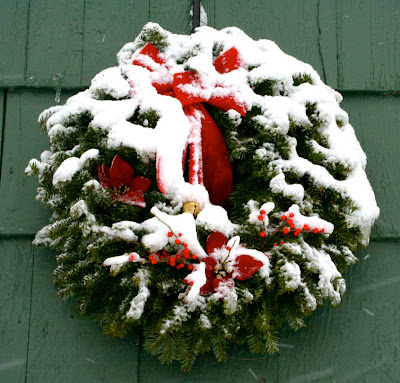 I've been cracking jokes in The Canning Gazette and elsewhere about how I put studded snow tires on my car a month ago, and as a result nature has felt no need to bring snow to our area. That all changed overnight, with the first of what will probably be many snowfalls for the winter of 2009-2010. It rained for hours before it grew cold enough to snow, so the precipitation stuck to everything with an undercoating of ice. 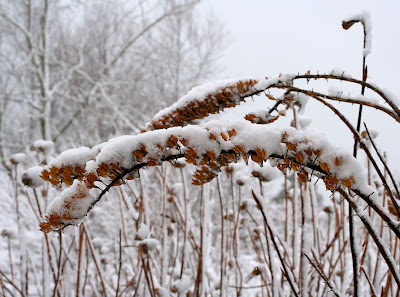 There's a little too much snow to show off the seedheads and structures of a lot of the plants in the garden, but you can see the graceful sweep of this Actaea 'Pink Spike' seedhead. 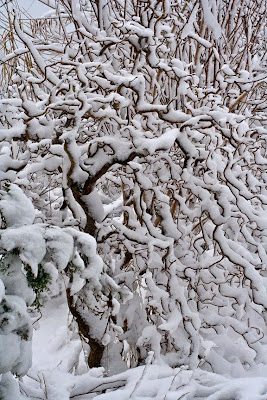 Some people prune out their Harry Lauder's Walking Stick (Corylus avellana 'Contorta') so that there aren't as many branches and the twisted structure can be better seen. But I like mine as it is, all wavy branches covered in wavy snowsweaters. In front of it, the Hinoki chamaecyparis is a little too cloaked to show its structure, but it's still pretty. 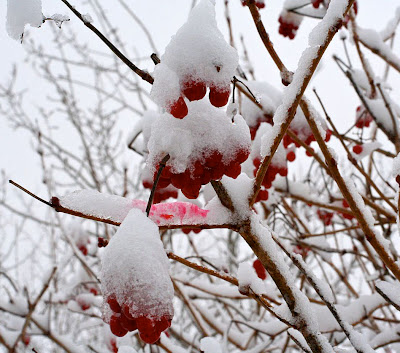 It's still too early in the season for the birds to have devoured all the fruit from the Viburnum trilobum, and the juice from the berries made garish snowcones. 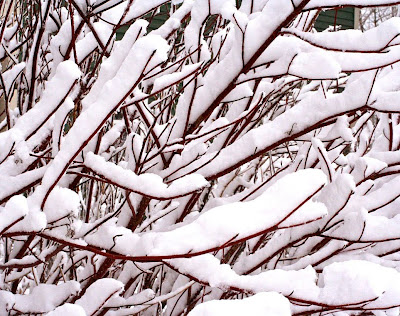 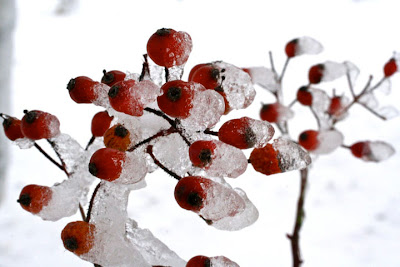 I never know quite how I should feel about the multiflora roses that are scattered around the county (and beyond). On the one hand, they're invasive little suckers, and I wonder what they might be displacing. On the other hand, their tiny rosehips are beautiful in arrangements, birds feast on them, and the plants are gorgeous when they're in bloom and graceful when they're bare. I know they're listed as noxious/invasive elsewhere but so far aren't here. Someone referred to this plant as the 'Acadian rose', wondering if the Acadian settlers had brought it here, but I've found nothing to prove that. Anyone have anything to offer on that subject? 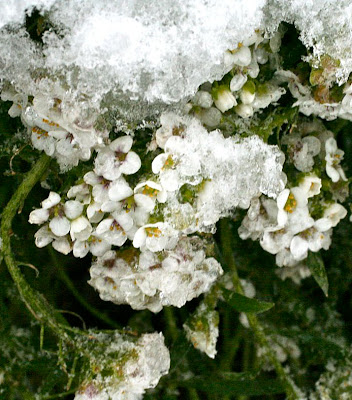 I guess of all the annuals in my garden containers from this past summer, this alyssum gets the award for being the most persistent. I think when the snow melts, however, she'll have finally thrown in the towel. I hope it seeds; it's been a delightful, carefree plant. 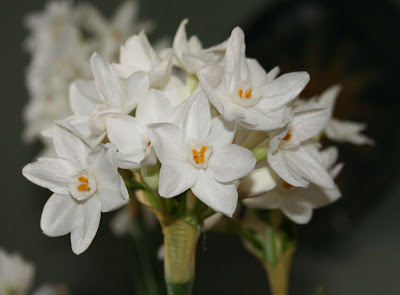 The wind didn't want to let up, so I came back indoors to let the warmth of the kitchen stove and the fragrance of paperwhites perk me up. 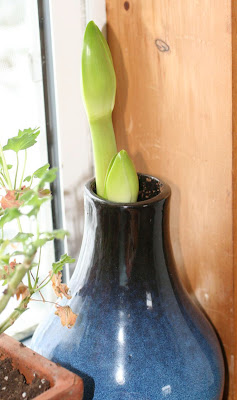 One of the amaryllis is promising a show in the not too distant future. In fact, quite a show. I have to move this one to my office from the kitchen to slow it down a little in its zeal to flower. Not sure which one this is til it flowers, as I kept the labels but forgot to mark down which bulb was in which pot. I'm sure none of you have ever done such a thing... 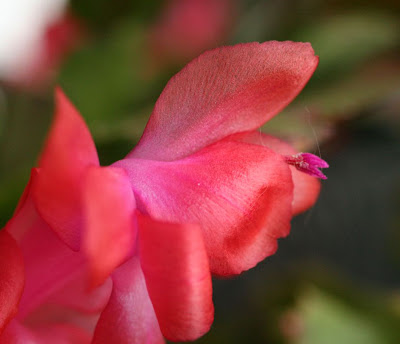 One of the Christmas cacti decided it really, really can't wait for Christmas, so it became the November cactus instead. It's just wrapping up most of its bloom, but there are a couple of others on tap to perform as we race towards the season of light, love, and joy.
Oh, and my snow tires work just great. So bring it, winter. The sooner you get going, the sooner you'll be done. Or so I tell myself.