The End of November Approacheth! 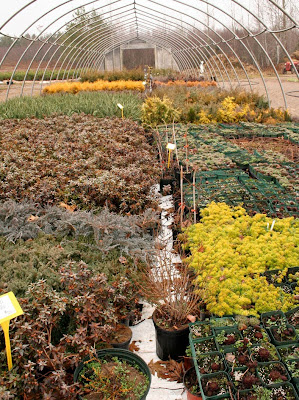 If there has been a defining weather pattern colour for NOvember, it's been grey. Grey skies, often wringing rain out like water from a dirty dishrag, making me feel grey with the blahs. Thankfully, we're into the last gasp of NO(light)vember, and moving on to December and the colourful lights and decorations of Christmas. 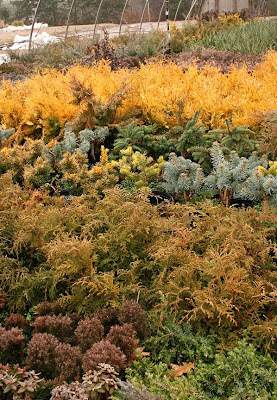 I don't need any excuses to go visit my friend Rob Baldwin in Upper Falmouth, but there was also the happy occasion of having to pick his brain for an article I was working on. Not surprisingly, the day I visited was grey, dreary and raining. But it wasn't cold, and we walked around the nursery and winter greenhouses, and Rob's plantings and containerized plants proved a point that he's always maintained: we in Atlantic Canada can plant for brilliant colour in the fall and winter when we most need it. Rob's a huge advocate of evergreen plants, both broadleafed and coniferous, and all you have to do is walk around the nursery and the rest of his property for a little while to see his point about their versatility and variability in colour, size, shape, texture...and then make your wish list and start filling it. (I have quite a few, but every time I go to the nursery, my list expands. What a surprise that is). 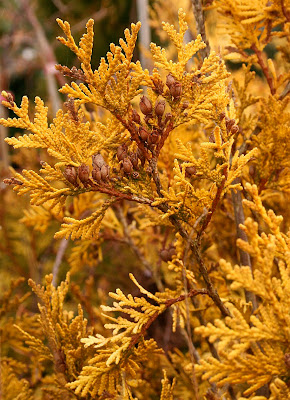 This is 'Sunkist' cedar (Thuja), one we both agree on as a must-have shrub: it holds its golden colour really well, and is a great bird plant, both for them to hide or nest in (larger plants) and for the cones they use as food sources. My own 'Sunkist' isn't huge, but after four years in my garden it's never had any problem with dieback or windburn. 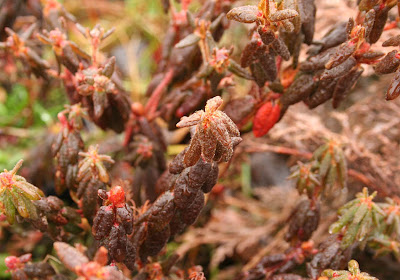 This is a form of Labrador tea (Ledum groenlandicum) that Rob grew from seed collected on our epic voyage to northern Nfld and southeastern Labrador two years ago with Captain Dick Steele and a dozen or so other intrepid plant hunters. Rob collected the seed for this off the side of a high hill at Blanc Sablon, Quebec, where we took the ferry from Labrador back to Newfoundland. I sat down at the ferry terminal and had a batch of kittens worrying about him climbing that hill after seed, but it was obviously worth it. The seedlings from that site are growing with an odd reflexed habit to their leaves, possibly to shed snow and protect themselves from the bitter winds that would scour that hill face. 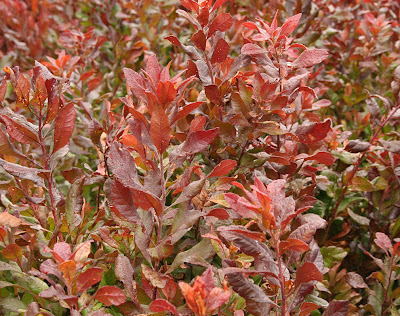 This is one of the finest of native plants for a wildlife garden or just because it's gorgeous: northern Bayberry, Myrica pensylvanica. It is fragrant, has this amazing fall colour, holds its leaves for a long time before November winds take them, and has cool blue-grey berries which birds eat. People use it in decorative wreathmaking, too. 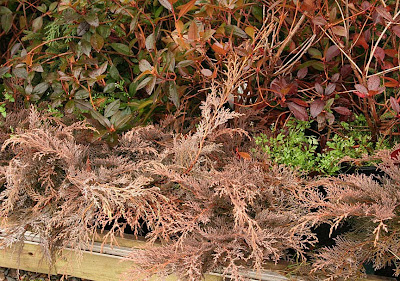 "I don't know why more people don't use Russian cypress," (Microbiota decussata) Rob said when we came to this collection of containers in one of the cold frames. "Look at its fall colour!" I totally agree with him (and it's one of the plants on my 'add this next year' list. In the summer, it's obligingly green and creeping and wellbehaved, but its fall colour is as splendid as 'Heatherbun' chamaecyparis, which I do have and love. 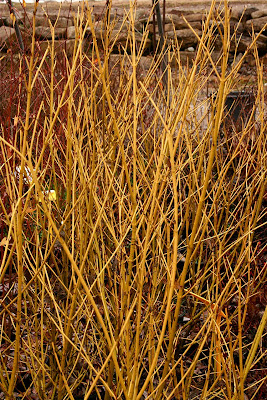 I happen to be very fond of native dogwoods like the red osier dogwood (Cornus sericea). Its red twigs glow beautifully especially against a backdrop of snow. This is the gold-twigged form, 'Flaviramea', which also works well; and for those of you with a flare for decorating, try adding a few twigs of both the red and gold forms to your winter flower/foliage arrangements. They're awesome. 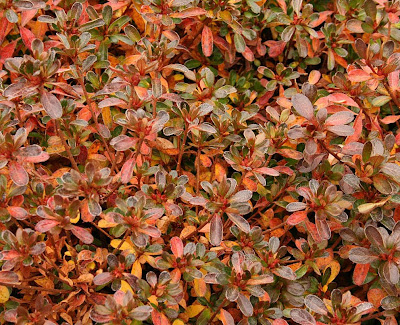 Many rhododendrons and (especially) deciduous azaleas do really, really well here in Nova Scotia; they like the acid soil, and breeders have been propagating all kinds of good, cold-tolerant forms. This small leafed beauty is R. kiusianum, the Kyushu azalea; I was quite enchanted with the variation in foliage colour, and think I'll try it in the most sheltered part of my garden next spring. 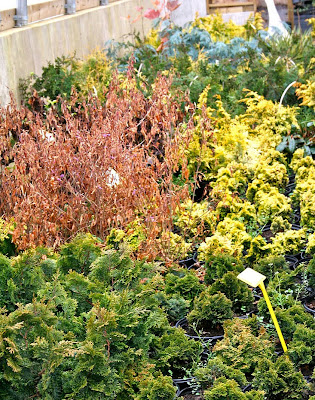 Some of the younger and more borderline-hardy plants are spending the winter in one of the big greenhouses, where they will be protected from winds and snow. The photo doesn't really do them justice, because there are just so many forms and colours. 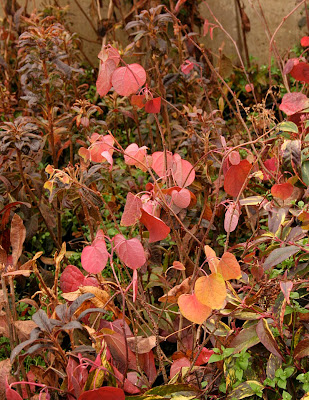 I've never seen this shrub before, and I want it. It's Disanthus cercidifolium, the redbud hazel, a member of the witch hazel family. Look at that fall foliage colour! Obviously I'll have to cold test this on my high hill, but it's apparently hardy to Zone 5. Want want want. 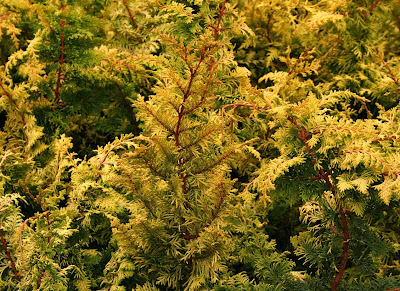 You can call this Golden fernleaf false cypress. Or Golden Dwarf Hinoki Cypress. Or, if you wanna exercise your tongue, Chamaecyparis obtusa 'Tetragona Aurea.' Just don't call it drab, boring or ugly. Because it's one of those catch-your-breath awesome chamaecyparis. Want want want WANT! 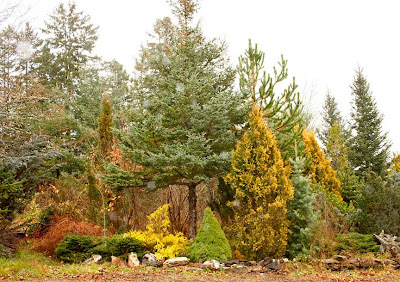 When Rob first moved to his property about 20 years ago, there wasn't much of anything there. He began planting trees and shrubs. A lot of trees and shrubs, especially evergreens, in all sizes, shapes and colours. There's always something to look at there, but this really is when the evergreens come into their own. 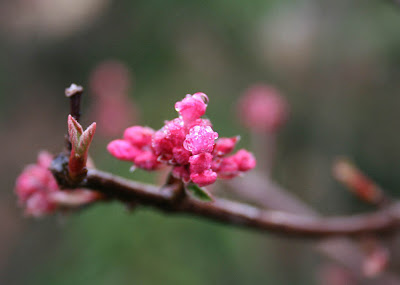 We came across this 'Pink Dawn' viburnum, getting a jump on spring out underneath some hardwood trees. Perhaps it knows something we don't about the coming winter. Maybe it's going to be a mild, open one. But there will still be plenty of grey days that will need alleviating by lots of colourful plants indoors and out. 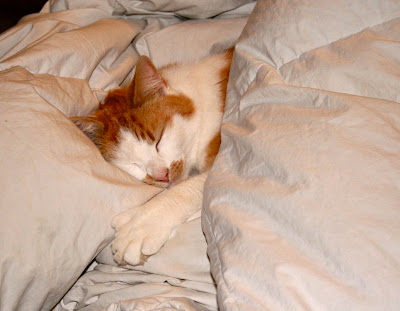 Or else, like Mungus, I'll have to decide to climb into the duvet and sleep til spring.