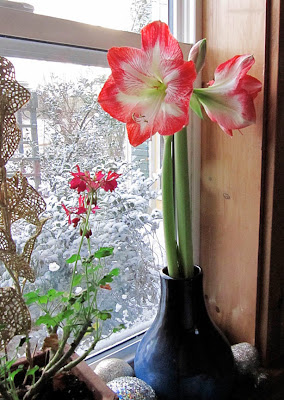 Yesterday was one of those days where the mercury dropped from well above freezing to considerably below in a matter of hours, and the wind that had gone on brief hiatus came back with a vengeance. Naturally, it brought along some of those 'flurries where winds blow onshore...' which as we know have been known to create a LOT of inches of accumulation.
Didn't matter to me. The first of the amaryllis had decided it was time.
"Is that Sydney?" My longsuffering spouse asked me.
"Mmm...nope. That's Minerva." I replied, scrutinizing the box tops that I had saved in my office after forgetting to match containers to bulb names when I planted these all. 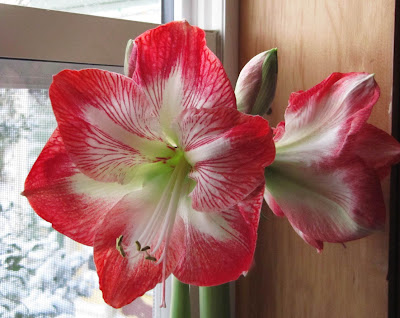 As you can see, that curious vase I bought nearly five years ago is doing its job, holding Minerva's two stems of blooms and buds upright quite nicely. I've grown this one a number of times and never tire of her festive colours. Part of the reason I grow her is that I have an aunt by the same name, who sadly is lost in the fog of Alzheimer's disease, just like her brother--my father--was. So when I look at this magnificent, exquisite flower, I think of my vigourous, capable aunt as she was in happier days. 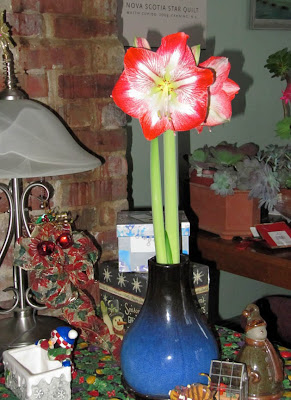 Since I've yet to bring home any poinsettias and two of my Christmas cacti are actually planning to bloom AT Christmas, judging on their bud sizes, I thought we should move Minerva into the living room for several reasons. One, it's much cooler in there, away from the heat of the woodstove in the kitchen, so her lovely flowers will last longer. Two, she adds a definite presence to the living room's Christmas decor, which is still a work in progress. And three, I moved the slowest-growing bulb into the kitchen to give it a boost.

There are still two more bulbs upstairs in the reading room that need to come downstairs, as one is probably going to blossom next week. We won't know who is who (other than Minerva) until they have all put in a floral appearance, of course. But it's fun to watch them slowly, glamourously reveal their beauty. I think next to orchids, amaryllis are some of the best show-stopping flowers there are. Don't you agree?