A Passion for a Plethora of Poppies, Part 2: Growing tips 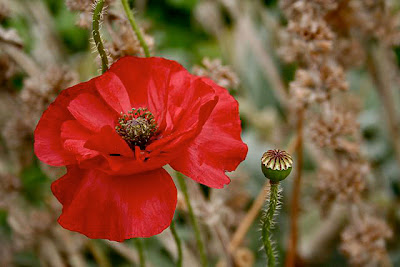 Sarah O, another blogger who lives in Nova Scotia, asked me in a comment how I managed to get Icelandic poppies to cooperate in our clay soil. Hence the several posts on poppy types and growing requirements. There have also been a couple of questions in comments since then, so I'll try to answer those as well.

Growing poppies has always been easy for me. Some years ago I bought potted Icelandic and alpine poppies in the spring and transplanted them in, and they have done the rest, seeding themselves replacements each year. They are classified by growers such as Thompson and Morgan as hardy biennials, meaning they take two years to come to flower. Although I’ll often tuck in a new plant or two each year just to make sure I have a host of colours, mostly I rely on the current plants to ensure their own success. They are not terribly fussy except that they demand good drainage, and so they tend to do best in the front garden or in one of the two raised beds out back which has the better drainage. They will often bloom themselves into exhaustion, but not until well into autumn, especially if you do deadhead them. 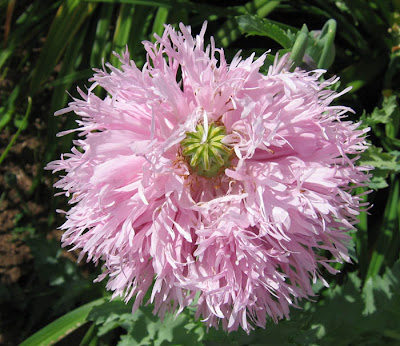 The annual poppies (R. rhoeas and P. somniferum) are basically everywhere around our property, which is the way I like it. There's usually a huge flush of bloom, but because of some seeds germinating later in the season, some plants being especially prolific, and just good luck, we have P. rhoeas poppies flowering until the end of the growing season. The poppy in the top photo was blooming in late October.

All poppies in the Papaver species will take full sun to part shade. Most of ours are shaded at least part of the day, either from buildings or because of trees and shrubs. If you give them 4-6 hours of direct sun a day (I'm guessing based on what's shaded when here), they'll do just fine. They'll take more shade, but don't tend to get as large or flower as prolifically. The meconopsis also like some shade in their day, and they will NOT take a lot of heat. Hence they do well here, because on those few hot days we have, the plants are shaded by the hottest part of the day. We also get a bounty of rain and fog to keep the humidity up where they want it.

I don't overfertilize plants. Most of the beds get some seaweed meal, some mushroom compost and some regular compost worked in around them in the spring, and that's it. It seems to work just fine, wouldn't you say? 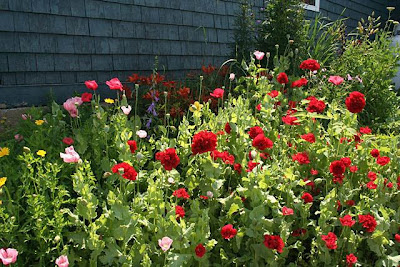 The annual poppies were here in great profusion when we moved here ten years ago, and I’ve just added to the fun. Certain colours present themselves in certain areas, and some years there are more than others, but there are usually all kinds of them around the garden. I do collect seed, mix it all together, and fling it in various beds around the yard, and they take it from there. 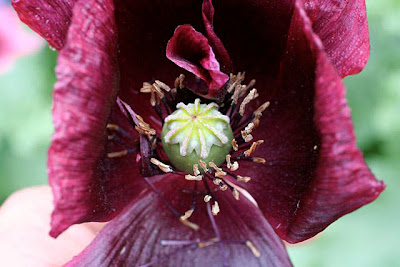 Annual poppies resent transplanting so they’re best seeded where you want them, or where they choose to seed themselves.. Rake the area where you plan to plant them, mix the seeds with a little sand, and cast that out on the ground. Pat them in a little if you wish, make sure the soil is moist, and then mind your business. They'll do the rest. The main thing is to give them that good drainage that they want. My understanding is to seed them in spring or autumn, and not during the heat of summer, especially if you come from a hot-summer area. But I don’t, so I can’t confirm that. I know that some years we’ve had poppy seedlings emerge in October and early November because there’s been no frost. But there are still always lots the following year.

If you have massive germination (and you will if they're happy), you probably should thin the seedlings out, so as to get more large plants and large blooms. But here's what I find with the breadseed poppies. They will grow and flower regardless of the size of the plant. I've had poppy seedlings 6 inches tall, with poppies on them the size of quarters. Sometimes I do thin them a little, but because they're so scattered in amongst all kinds of other plants, some of the seedlings DO tend to get naturally shaded out. And sometimes I just let them all be, so that I do have them in all possible sizes. I only collect seed from the very biggest and hardiest plants; I tag the ones I want with fluorescent-coloured marking tape, and then go around collecting the seeds when the pods are ready (they'll be brown and you'll hear the seeds rattling around inside the pod.) You need to watch carefully, though, because one day they aren't ready and the next day they are, and if there's a wind--they'll have scattered themselves for you. 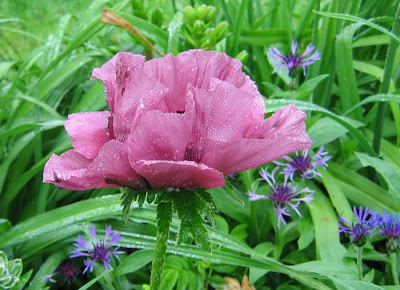 Back in about 1999 or 2000, I bought a package of P. orientale seeds, the Pizzicato mix, and seeded them inside. When they were big enough, I transplanted them out into a bed I was building in the back garden, and left them to themselves. Nine or ten years later, they are STILL performing for me every June, in shades of coral, orange, and delectable hot pink. And some of them are huge. I’ve never moved or bothered them since putting them in, and even though that bed is a bit iffy in the winter, apparently they get adequate drainage that they continue to flourish.

Now, they only bloom once, and as anyone whose grown them know, the foliage of oriental poppies usually dies down once the flowering is over, and that can leave a gap in your border or bed. What to plant there instead? Mine are in a highly mixed garden, with a host of deciduous shrubs, other perennials including lots of hostas, daylilies, rudbeckias and coneflowers, so it's never an issue to fill in the spaces; the hostas and daylilies especially just grow a little bit larger while the poppy foliage melts away, and all of these plants will flower later in the season. Depending on where you live, I'd plant a perennial or a low shrub that doesn't flower until after the poppies are done, so as not to detract from the show.

The beauty of blogging is that you learn something new every day. From Sylvia in England, I learned about super poppies, which are inter-species hybrids created by an American plantsman who crossed P. atlanticum, P. somniferum, P. orientale and several other lesser known species over a period spanning thirty years. The are said to bloom longer, come in some gorgeous colours, and will produce a second flush of bloom with deadheading. Now, I only learned about these today and haven't had a chance to really research them but here are two observations about them: 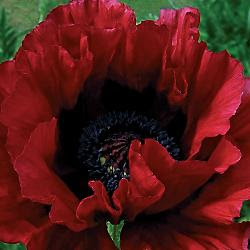 1. Although bred in the States, they seem to have gotten more attention from the British press and nursery operators
2. I have never seen or heard of them here. Which doesn't mean anything other than I haven't heard of them til today, but I'm going to see what else I can find of them. Because I saw photos, and had a flush of Urgent Plant Seeking Madness, the likes of which I haven't had in nearly a year.! I did locate some interesting information about them including an article from Park Seed Company, including a photo of the most UPSM-inducing poppy, the dark wine 'Heartbeat'. Want!!!!!
I bet they'll be expensive. One British Nursery was selling them several years ago for about 9 pounds sterling (which these days is around 20.00 Canadian, but that's okay. If I find them around here, they may supplant my obsession with Meconopsis! 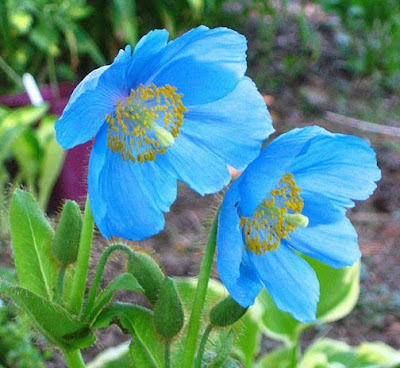 With regards to the darling but cantankerous blue Himalayan poppy, you can read the post I did about them last year here. I know that more than a few of you have had your challenges with these plants, and they certainly can be an exercise in frustration, exasperation, hope, heartbreak--and utter joy when they flower. I’m just lucky in that our cool, moist climate pleases them, even though it causes me no end of exasperation with regards to other plants.

I hope that if you're not already growing poppies (at least the annual ones) you'll give them a try. But I warn you, they're addictive. As for the blue ones...Kylee gets points for total determination, if not complete success. I know what she means, though. I have similar problems with tomatoes...