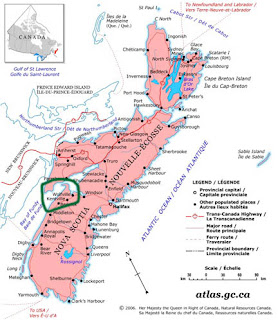 It wouldn’t be very good if the person who thunk up the Garden Bloggers Geography Project didn’t take part too, would it? You have til Friday to get your 'homework' link to me!

Welcome to Nova Scotia—specifically, Kings County, Nova Scotia, part of the Annapolis Valley. You’ll notice just slightly to the right of that green line I drew is Windsor, where fellow blogger Nancy of Soliloquy lives.
Like any Valley, ours is formed in between two mountains, in this case the North and South mountains. The North Mountain protects the Valley from the upper Bay of Fundy, where are found the world’s highest tides, although the Canadian Hydrographic Services tells us that it’s a tidal tie between those in Ungava Bay, way up north, and our Minas Basin. 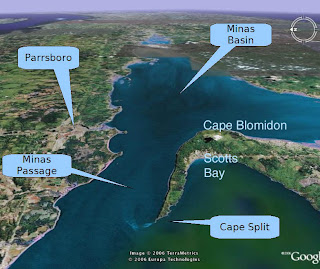 If you look at the map, you’ll see a little peninsula that sticks out, like an appendix, into the upper Bay—into the Minas Channel, actually. That’s the end of North Mountain, including Cape Blomidon on one side of the peninsula, Cape Split at the terminus, and Scotts Bay in the bowl of the peninsula. 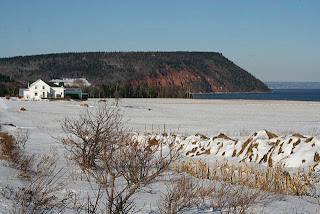 Cape Blomidon is a brooding promontory that plows a furrow out into the Minas Basin, looking across at the Five Islands and the Parrsboro shore. It’s also where the great Mi’k maq god Kluscap, or Glooscap, sleeps. I have my own theory that the mountain’s great positive power comes from the fact that Kluscap is here with us. Incidentally, Kluscap formed the Five Islands by throwing chunks of Blomidon at Beaver, who was bothering him. Or was it Raven?

At the tip of the peninsula is Cape Split, a spectacular set of basaltic sea stacks and the terminus of a very popular hiking trail. The peninsula sticks out into the Minas Channel, and twice daily, there’s a snorting good riptide that goes charging around that, as racing tidal waters come up the bay, spill into the bowl of Scotts Bay, then go screaming out around the Split and up into Minas Basin. There are times when it’s ‘flat-ass calm’ out around the Split… 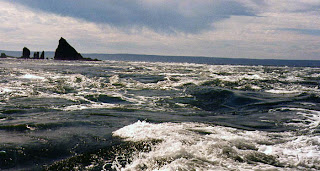 But twice daily, it’s rather different. Whirlpools, eddies, dancing water…and that’s even without the wind blowing. The devil apparently surfs out there, or so my spouse’s cousins reported when they had a bad day of it out lobstering one fall season a few years back. 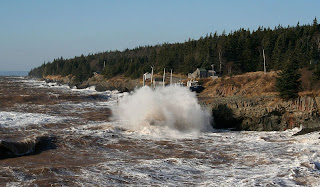 I’ve mentioned the wind a time or two…it comes screeching up out of the Bay and hits us quite well on our high hill looking down at the Bay and the Split, but on the other hand, we don’t have many black flies or mosquitos. And plants that do well here are sturdy species, although we have microzones around the house and barn. We're up high enough away from the water--about a mile as the crow flies--that we don't get a lot of salt spray in our yard. But we do get wind. 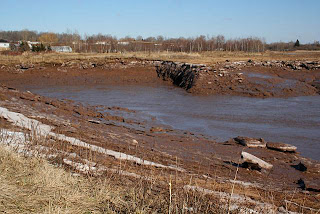 Down in the Valley, the tides affect life in a different way. There are numerous tidal rivers in the Valley, including the Habitant, Cornwallis, Canard, and Pereaux Rivers just between the mountain and Wolfville, 20 minutes from us. Alongside these rivers you’ll see a series of dykes, holding back the sea and the tidal rivers, and reclaiming thousands of acres of fertile land. Here’s an explanation of the dykes and the aboiteaux created by les Acadiens and later New England planters:

Acadian agriculture French colonists eagerly settled the shores of the Annapolis Basin in the decades following establishment of the fortified "Habitation" at Port Royal in 1605. They quickly recognized the rich agricultural potential of the large tracts of salt marsh, if only the sea could somehow be held at bay. Some among them were familiar with the dyking techniques used for reclaiming marshland in Europe, and they soon set about building comparable dykes to extend their newly acquired lowlands. The first such dyking was undertaken near Port Royal between 1635 and 1640. These were earthen structures about 1.5 metres high, veneered on both sides with sods of salt grass to hold the soil in place. Water inside could drain out through large wooden pipes ("aboiteaux") extending through the base of the dyke and usually placed in existing creek beds. These were fitted with a simple, ingenious wooden flap valve opening to seaward to allow water to drain out at low tide, but closing tightly as the tide rose, preventing intrusion of seawater. Within a few years, rain and melting snow leached out most of the salt. The thick layers of fertile alluvial soil thus reclaimed were rich in inorganic and organic nutrients. One agricultural engineer termed these dykelands "a reserve of energy in the form of fertility". 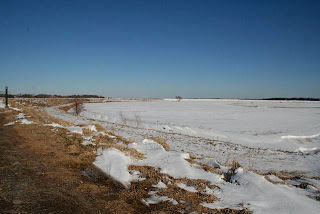 Here’s a bit of a demonstration. On the left is the wall of the Wellington Dyke, curving away towards the horizon ; that white expanse is a large field owned by a local farmer. 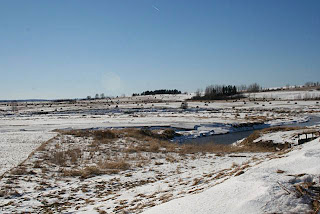 And this is on the other side of the road—a small, wellbehaved looking river winding through more fields, right? 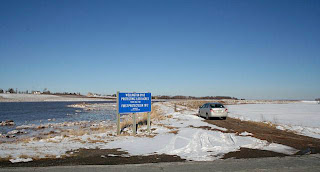 Not exactly. If it weren’t for the aboiteau under the road--granted, a more sophisticated sluiceway than the wooden ones created by Les Acadiens--and the dykewall, everything would be underwater. This shot is just a 180 degree turn from that one. Granted, we were at about high water when I took this, and we’re having a high run of tides the past few days, but you get the picture—all this would be underwater were it not for the system of dykes between the Valley and the Bay of Fundy. (This one protects over 3000 acres from the sea water). They’ve held, too, since 1869 and the Saxby Gale. Let’s hope they continue to hold—the Dept of Agriculture keeps them well maintained. 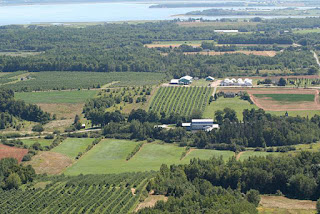 Now we’re back up on my mountain, at the Lookoff, which looks down on the Valley. Actually, you can see five counties from here—Cumberland, Colchester, Hants, Kings and Annapolis—and much of what you can see in this photo would be underwater, were it not for the dykes. 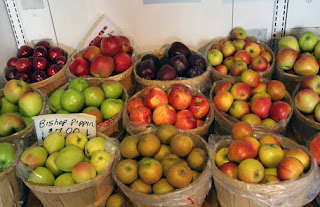 As the name suggests, the Annapolis Valley is a prime area for agriculture, especially apples, but also poultry, dairy, mixed vegetables, some grain, and other types of farming. A big employer is Acadia University in Wolfville, one of my two alma maters (alma materae?); another is 14 Wing Greenwood, an air force base where my father was once stationed before I was born. There’s a lot of tourism through here in the summer, including to Scotts Bay to hike to Cape Split. But I just ignore all that and do my thing. We're about twenty minutes from Wolfville, and several other towns, 8 minutes from the village of Canning, ninety minutes from downtown Halifax, and that's plenty close enough for me. I couldn't live in town, in a city, in a subdivision or near nosy, covenant-building 'neighbours' who think up new laws to restrict people every other Wednesday. That's the reclusive writer in me, though. 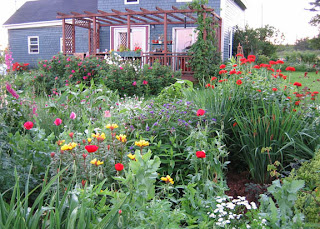 I figured something out one day not long ago. My longsuffering spouse is a retired lobster fisherman, and the sea is in his blood. He’s always referred to this side of the house as the front, yet it faces away from the road, and out into the back garden, the pasture and woods…and the Bay. 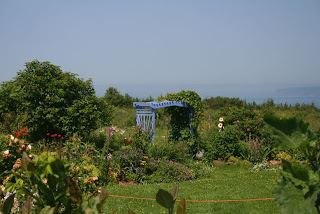 Which really IS our front yard…when LSS gets up in the morning, he goes to one of the upstairs windows that look out on the water, and has a look. Every morning, no matter what the weather. He says, “I have to make eye contact with the water before I can get on with my day.”

And I understand that perfectly.