Cooling it with white and green 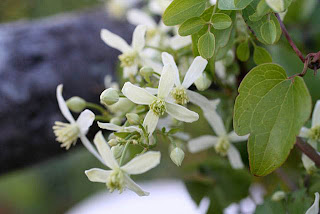 In a perfect world—the one where I win the lottery and get to spend time visiting all the marvelous gardens I want to see—I’ll get to visit the famous white border at Sissinghurst. I’ve seen more modest white gardens done, and done nicely, but while I love them, especially in the evening, they’re not for me. I’ve talked before about the fog up here, and what that does to white and other pastel flowers.

That’s not to say I don’t enjoy white flowers, including in our garden, as well as white variegated foliage, and silver foliage too. White shines on a warm summer evening, or in a shady spot of the garden, and cools things down a bit when there might be a bit too much colour going on. Green and white do make me very happy, whether combined in flowers or in foliage, so there is plenty of it around our garden—just not all in one spot. 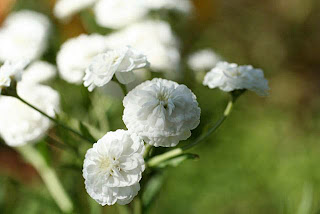 Achillea ptarmica ‘The Pearl’ begins blooming in our garden in the heat of late July-early August. It’s planted under a white birch, so it echoes nicely off the snowy bark of the tree. It's a bit of a wanderer, but nothing that can't be managed by digging up and dividing it in the spring. 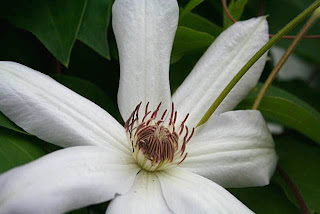 Most of our clematis are in strong colours, but I do have three with white flowers; the purple-foliaged Clematis recta ‘Purpurea’ (thanks, Nan, for supplying the right species and cv); Clematis terniflora ‘Sweet Autumn’, (photo at the top) and this large flowered cultivar (long since suffering from LoLa syndrome). The flowers look like stars in the deep green (or purple-green) foliage. 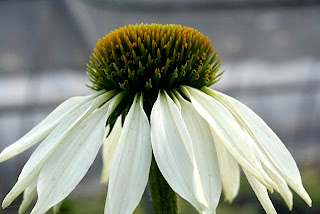 It’s no secret that I’m dotty about echinaceas, and while I usually am drooling on about green ones or orange or yellow or even purple coneflowers, the pure white ones make me pretty happy too. This is probably ‘White Swan’ and it’s a plant that does well, though not as vigourously as some of the other cultivars. 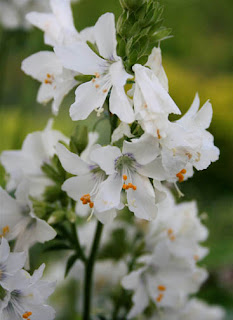 Polemoniums also make me happy. This white one flowers for weeks and weeks on end, is fragrant, seeds slightly but not obnoxiously, and is a great plant. I also have two with bicolour foliage, ‘Brise d’anjou’, and ‘Stairway to Heaven’; the latter is actually tricolour because it has shades of pink in the foliage, similar to Nishiki willow. 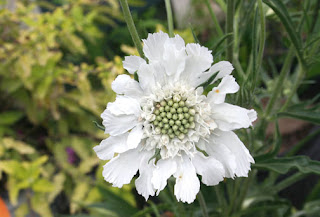 Scabiosa comes in a host of colours; we have a lovely blue one, but isn’t this white blossom great? It’s in a partly shaded part of the garden, and glows nicely against several plants with gold-chartreuse or blue foliage. 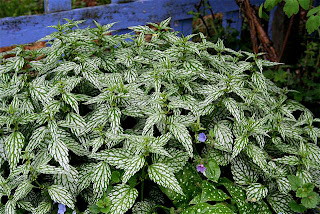 Here are two plants that are great whether they’re flowering or not: Lamiastrum ‘Herman’s Pride’ and a generic pulmonaria. We have several lamiastrum that act as ground covers, but Herman’s Pride just forms this lovely, polite clump in the shade garden under our spruce trees. We have a number of pulmonaria, some with red flowers, others with white, others with light or dark blue, all of which are lovely, but it’s the foliage that rocks my socks. Ironically, I have very few photos of them, because (ahem) I lost a pile of images earlier in the year, so I can’t show the different splashes, spangles and spots of silver patterned foliage. Just wait til this spring! 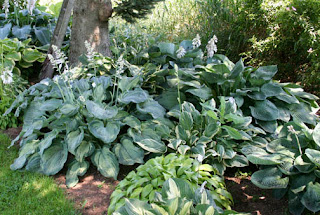 I was a bit of a slow convert to loving hostas, because I had to see them wellgrown, and wellgrown in quantity (like in this garden, which boasts well over 100 different cultivars) before I really got it and started relishing the rich diversity of leaf shapes, colours and colour patterning. Around here I”ve found that too many people don’t let their plants get large enough before they’re busily dividing them—and many cut the flowers off. Ours don’t get divided until they’re crowded, or until someone wants a pieceof one, and the flowers are as important to me as the plants, especially the fragrant ones. 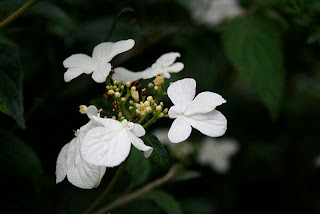 Viburnums are great, and this has to be one of the nicest: V. plicatum tomentosum ‘Mariesii’, the doublefile viburnum, with its horizontally growing branches, deep green foliage and those snowy white flowers. Ours is young yet, but it’s going to have room to grow because I’m ripping out an annoying and boring yellow potentilla near it, and thinning down an ‘Annabelle’-type hydrangea on the other side of it, so its wonderful shape can be seen and enjoyed. 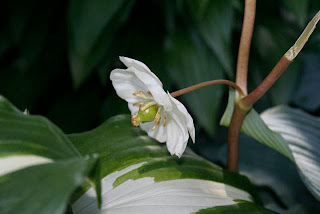 Mayapples cause me great amusement from the time their nose-like shoots begin poking up out of the soil, until their leaves unfurl and expand. I know there are fancy-patterned cultivars available, but I think they’d be marginally hardy here, where this native species does just fine. It also works well beside a host of hostas, a whilte astilbe, and some sweet woodruff, setting up a patch of green and white plants—but not a border, just a little section. 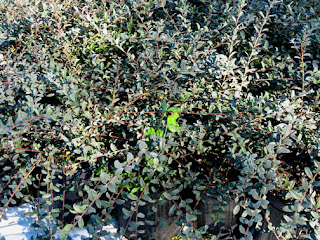 When we were on our plant expedition to Newfoundland and the southern Labrador coast, we saw many arctic-type willows. This particular one is a bit broader leafed than the species I have in my garden, and tends to grow more prostrate—and yes, it’s coming to join our garden come spring, because I love that grey-green foliage. 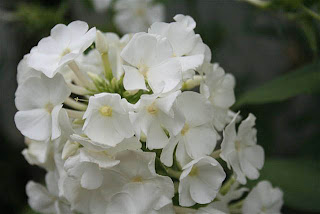 In my garden, the coolness of our summers means that tall phlox doesn’t get around to flowering until late August—but then it keeps flowering until into October. This is, of course, the blissfully fragrant and mildew-oblivious ‘David’, which is neat because it’s about the only white plant flowering at a time when most everything else is shifting to the fall tones of rusts, orange, gold, and magenta. Yes, magenta! ‘David’ has been a topnotch plant, and I’m gradually spreading it around the garden to offer its cooling crispness to other sites. 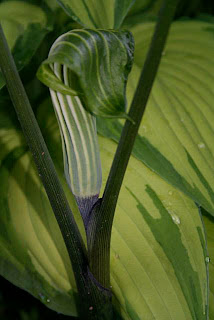 Two more offerings, in the green on green category. A native jack in the pulpit shyly flowers in front of a gold and green hosta—I can tell you a great tale of woe about my hostas and how many of them have no names because I don’t know which ones they are—just that I like them, and should have taken photos and matched them all up long ago. 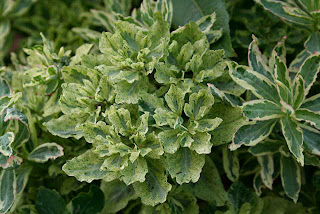 And finally, a euphorbia that I fell in love with when I spied it at another friend’s nursery—this is Euphorbia ‘Lacey’, bicoloured green and white or greenish yellow and green in its foliage and bracts and flowers. It grows near Lime Glow juniper and a gold plumosa Chamaecyparis, setting up another nice little colour echo—more by accident than design.