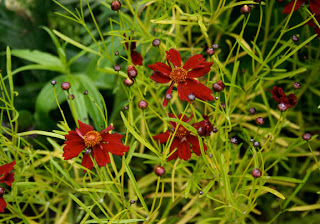 Given your comments in the previous post about chartreuse foliage, this IS a great colour for plants (even though some of us don't like to think we're following any sort of fashion--we'll just say we like the plants for their own sakes and a pox on the fashionistas, okay?)
We have quite a few annuals and perennials that sport either chartreuse flowers or foliage; I decided to toss in a couple of floral offerings just because they play the same terrific role as their foliage counterparts.
Kicking off the parade of flamboyant foliage is Coreopsis 'Cherry Lemonade'. I really, REALLY hope this plant comes back this summer--it did spectacularly well all year, flowering well into autumn, and I did cover it in boughs as the weather grew cold...its flowers are the perfect foil for that gold-green foliage. 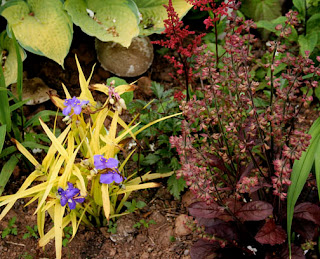 Since Tradescantia 'Sweet Kate' was doing very well in the front garden, I bought another couple of plants to establish in the big back border, where a number of other tradescantias already are well established. Here it's setting off the alarm bells of Salvia 'Purple Volcano' while I think hosta 'Inniswood' is the hosta nearby. 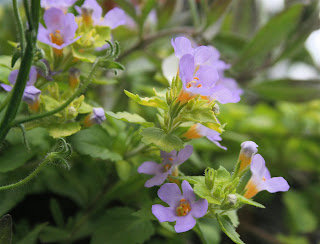 One of my favourite annuals last year, both for durability and colour was bacopa 'Copia Golden Leaves'. I've extolled the virtue of this plant before, I know, but it's just such a great performer, and those lavender flowers against the chartreuse and green leaves just works so well. The nursery where I got it is growing it again, I found out last week. Goody, because I neglected to bring it inside before the first ice storm.... 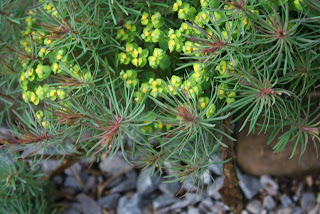 I have written before about my love for euphorbias. This is E. 'Fens Ruby', and a definite favourite, both for the red colouring in the foliage and of course for that fresh chartreuse flourish of bracts and flowers. This one even threw a few flowers in autumn, but the main event was in midspring. 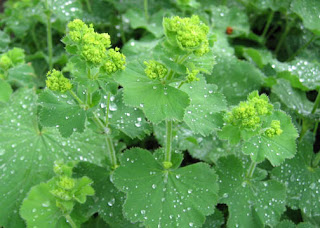 Another chartreuse flowered plant I can't be without is Lady's mantle, (Alchemilla mollis). I love this plant--it's so well behaved, with fantastic fanshaped leaves that look bejeweled after a rain or dew (or fog); and that froth of tiny flowers lasts and lasts. It's a great border plant, and lights up the foggy yard really well. 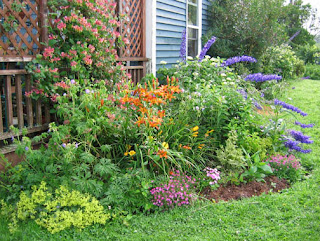 Here's ladys mantle again, doing its job of lightening up a bed of Cancun Asiatic lilies, Goldflame honeysuckle, deep blue delphinium, and a host of other perennials. 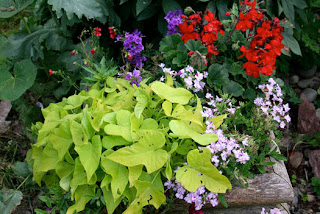 One of my favourite foliage plants is the annual sweet potato vine. It does very well in containers around our place, and this delightful cultivar is 'Margarita'. 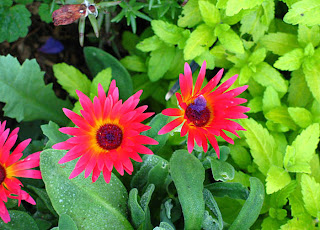 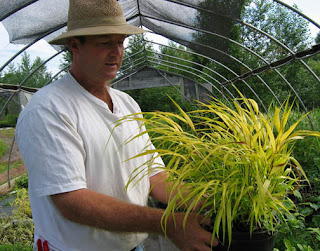 Nursery operator Rob Baldwin of Baldwin's Nurseries near Windsor (website under construction) is one of my favourite plantsmen, and a friend to boot. I can't go visit without leaving part of my bank account with him, but it's no wonder--his plants are field grown at his nursery, for the most part, and he has a terrific selection of native plants. This Japanese forest grass (Hakonechloa macra 'All Gold' isn't native, of course, but it's an amazing grass for the front of a border; it cascades in waves, and that colour is hard to beat. 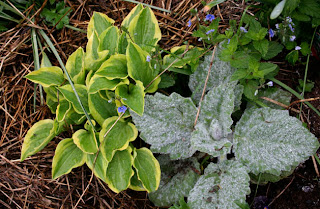 Yeah, so hosta 'Golden Tiara' is common as dirt. I don't care--it's one of some five dozen hostas, some unnamed--errrr, make that unidentified--around our garden, and I love it. Obviously, or I would compost it. Here it's nestled up against Salvia argentea, silver sage, a biennial with huge and elegant furry silver leaves, and one of the creeping veronicas. 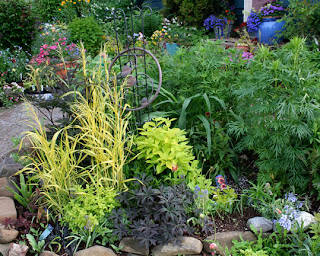 This part of the front garden contains a fair few chartreuse foliaged plants, including Bromus 'Skinners Gold', the veronica mentioned above, 'Brigadoon' hypericum, and a mystery shrub (which I finally dug up and moved this fall, still unidentified. Anyone know what it is?). 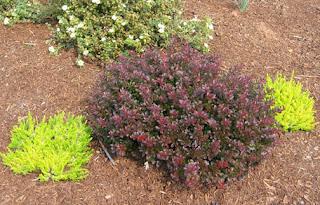 Another of my nursery operating friends (who had better be getting her website up and going soon!) specializes in native plants, grasses, conifers...and heaths and heathers, like this incredible gold Erica. But don't ask me which one it is--I thought I had it out back, but of course everything is buried, and I'm finding that with so many plants, some of the names simply go into hiding in my head. Never mind that. As the late, still lamented Steve Irwin would have said, "Isn't it a beauty?"

There are a host more chartreuse-foliaged plants around our yard, but I don't have photos of all of them--and I think you get the point, those who might not yet have gone for gold...give it a try this spring! I'll certainly be adding more, though probably not the gold smoke bush--I've seen it, but it's a bit iffy for the mountain--but I'll be looking for chartreuse foliaged columbines, centaurea, campanula...and anything else that catches my eye!

Yes, that's right. My name is jodi, and I'm a plant addict.

There are worse habits.