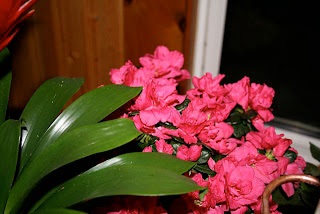 Once again it's time for Garden Bloggers Bloom Day, the keep-gardeners-sane project developed by Carol of May Dreams Gardens, and it's been really cheering for a northern gardener like me to see those of you with real blossoms outside in your garden. As some of you know, (in some cases, first hand!) this has been the week of much weather here in Nova Scotia, and we're all a bit weatherbeaten. But in my office, it's sort of summery; because there are no less than a dozen plants flowering, with a few others scattered through the house.
Deliver me from plant temptation, though, because this azalea is doing quite nicely; so much so that I'm deeply tempted to go get one I saw the other day in a deep purple colour--I'd never seen a house azalea that colour before, and the blossoms were larger too. Will I go back and get it? More importantly--will it still be there when I go back? 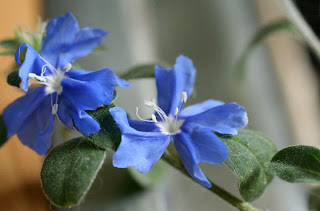 Although the growth on my evolvolus is looking a little straggly from lack of sunlight, it's still producing flowers every few days. IN another month I'll cut it way back and start fertilizing it, getting it ready for going outdoors for the summer, but meanwhile, these blue flowers just make me very happy. 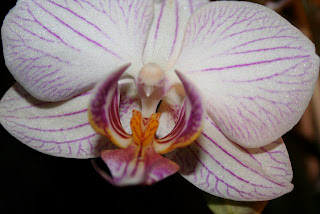 Another great success this winter has been the flowering of the Phaelenopsis--so well has it done that I'm getting mentally psyched to pick up a couple more easy orchids. There are two upcoming orchid shows happening, one in Halifax and one in Wolfville, and I know a couple of serious orchid-breeders/raisers, so you all know what will happen when I go visit them! 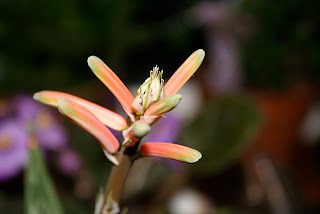 This is a first in a long time! My pheasant-breast aloe is starting to flower! This is one of those plants that pleases me so much architecturally because of its shape and colouring and texture, it doesn't have to bloom to be a star--so right now, it's really taking pride of place. 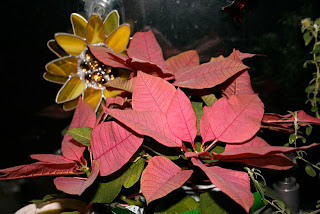 Although the flowers have long since dropped from the two poinsettias that I've still got (I let the other two go to sleep), this pink one and the bicolour are both still doing well, holding all their leaves and coloured bracts too. They're only small plants, and will likely succumb to be tired after a while, but for now, I still am enjoying them immensely. 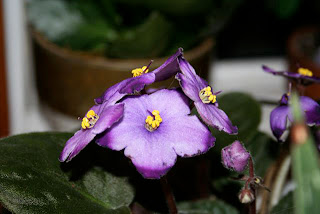 Those saintpaulias/African violets I rescued from the bigbox store have settled in nicely and appear to be thriving. They are also, so far, cathair free, because I've cleverly put them where the cat children can't get at them. Plus they don't seem to be tempting dietary supplements, so no one has come after them to chew on them. 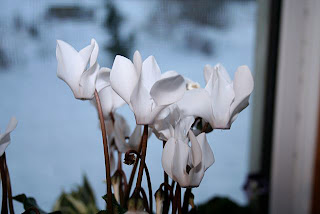 Someone--it may have been Diane of Alberta Postcards, whose current Blooms Day post is from Lotusland, also known as British Columbia--mentioned the fragrance of cyclamen in a post some months back. I have to confess I hadn't noticed any scent before, and I do find it somewhat ephemeral. The while cyclamen appears to produce the most scent, and that early in the day, and I love the purity of its blossoms, too.

A final note--I'm delighted to see how many have participated in the Garden Bloggers Geography Project so far! It's really enjoyable to learn more about where you live and garden, so different from my location. And yes, I'll get a post up about HERE, too, perhaps sometime this weekend. I also have several book reviews and my Wildflowers in Winter post to do, plus finish a couple of articles and start drafts on others. I'm never bored--frequently tired, but never bored--as we count down the days til spring arrives, (first, however, I gotta survive FARCH!)