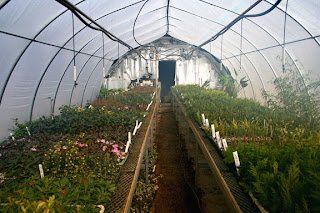 Nancy of Soliloquy posted earlier today about Gifts of the Garden, about the many blessings of plants, which led me to leave a comment quoting a song from Stan Rogers. His song was about planting crops, and he talks about putting "another season's promise in the ground." The funny thing about that is that today I spent a few hours in Nancy's neck of the woods, looking at another season's promise, at a friend's nursery in Falmouth. My friend Rob is a plant propagator par excellence, and his nursery is one of my favourite places to go spend the grocery money (whoops, that was supposed to read disposable income). While he does bring in some plants, he also grows a lot of his own material from seed and from cuttings. He's expanding and putting up a large new greenhouse, but I went down today partly to see that, partly to get a touch of spring, and partly to help him with some photos for his soon to be launched website. 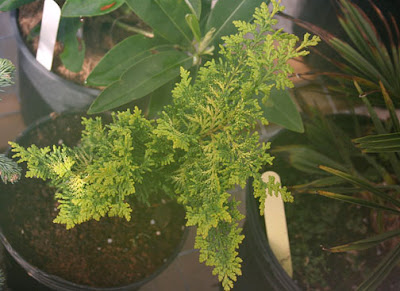 Some of my photos are a bit foggy looking because Rob's propagating greenhouse is nicely warm, with a mist system for the cuttings bench, and the lens on my camera kept fogging up. One of his passions is for dwarf conifers, which are becoming more popular all the time with gardeners. They're nice because even for a small garden, you can have a few really interesting, different cultivars. With lots of room...it's going to be even more fun for me. I'm a patient gardener, after all, and have the perfect site for coldtesting things for hardiness. 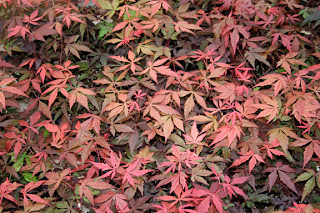 These are some of the Japanese maple seedlings that Rob grew last spring. He gave me a flat of them when they got a little bigger, and I planted them out around my place. We'll see how they fared this spring. Isn't it neat how they come in such a rainbow of different colours? 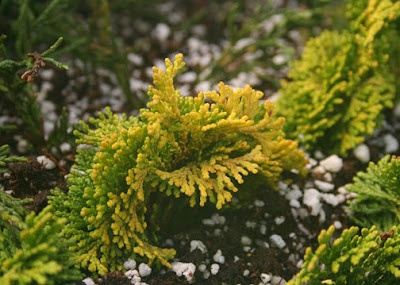 One of the plants that generates instant plant lust in me. Chamaecyparis obtusa 'Nana Gracilis Aurea' is a choice, gorgeous little plant, and I'm putting one in this year...I have other chamaecyparis, including Filifera aurea, and Plumosa aurea, and 'Heatherbun', and Nootka 'Glauca'...do you suppose it's an addiction? 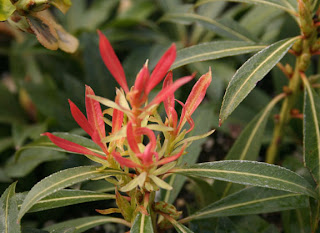 I wish that Pieris 'Mountain Fire' would hold this fantastic colour all year long, but it does hold it til well into June. And the flowers, well, the flowers are exquisite. I have one that Dick Steele of Bayport gave me several years ago, and it's going to flower this year...can't wait! 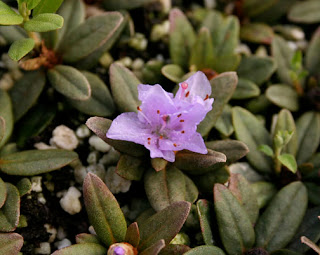 One of Rob's interests is native plants; and we collected a LOT of seeds when we were on the great plant collecting festival in Newfoundland and Labrador last September. He's also very partial to rhododendrons and other ericaceous plants, so he has a lot of cuttings of rhodos happily rooting--including a few that are flowering! 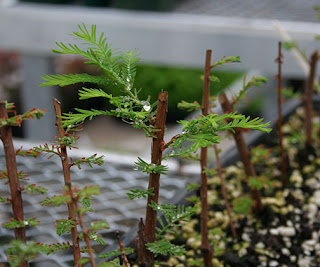 Those of you who live or are from down south will recognize this as being a Taxodium, or cypress. I don't know the species--whichever one is hardy to zone 5, I suspect--but one of them will be coming up here to see how it likes my neck of the woods, in time. 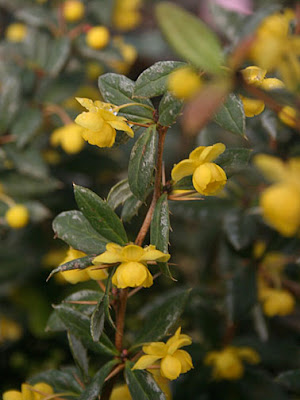 Don't these flowers look like tiny daffodils? Maybe daffodils for faeries? No? Well, I thought so...again, I don't know the species, but this is an evergreen barberry...and of course, when I saw it, I said my usual thing. "I want that!" Apparently, it's really, REALLY thorny--but I'm quite dotty about barberries, and hopefully, I'll get to test one of these out, too. 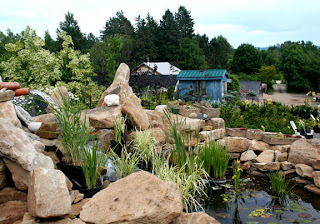 Although it's snowing again this evening, after a not too bad day today, what we discovered while going through hundreds of photos is that it really hasn't been so long since last August, when I took this photo... 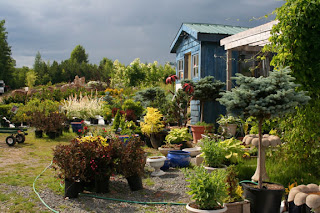 ...and it won't be very long until the nursery looks like this (maybe minus the thunderstorm that was happening that day...) and another season's promise of new plants will be ready for putting in the ground.