The Plant Rescuer and the African violets 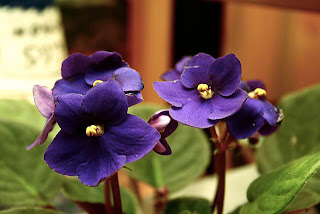 Really, I know better. I have to avoid certain places because I'm such a softy. But I was feeling strong, overly confident. After all, I'd gone into our vet's office to buy worm pills for the cat-children, and I'd decided to tempt fate by walking into our no-kill cat shelter. The gods of cat-adoption were smiling on me, because I walked around, talked to the seven or eight cats awaiting adoption--down in numbers, which is great, as plenty have been adopted out!--and never felt the urge to take any of them home. So I was feeling confident, mightily so, and thought nothing would happen, when I went to the department store to pick up some items we needed, if I went down to the department where the houseplants suffer. 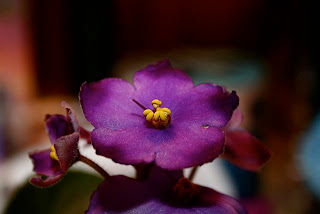 Wrong-o, girlfriend. At first, all was well. I was unmoved by the gay abandon of the potted bulbs in full flower. Narcissis beckoned me with their starry yellow flowers. Hyacinths cast their perfume at me, and tulips flashed their skirts like flamenco dancers caught in a kaleidoscope. But I was brave and strong. And then it happened.

Who said that? I peered around the corner of the aisle, and then I saw them. African violets. Dozens of them. Jammed together like sausages on a shelf, in gaudily coloured plastic wrappers. Uh oh. I could feel the temptation closing in on me.

Here’s a bit of a botany lesson for those who care about such things. African violets are not true violets, but are gesneriads, members of the family Gesneriaceae, along with other popular exotic plants such as the gloxinia and the Cape Primrose or streptocarpus. The botanical name of the most common species of African violets, Saintpaulia ionantha, comes from the German explorer who discovered the plant in southeastern Africa in the 19th century, a Baron Walter von Saint-Paul, and from the fact that the flowers resemble those of violets. While some enthusiasts refer to these plants as saintpaulias, most simply call them violets. I do, so I won't scold anyone else who does.

Although I do fine growing them, I haven't had any African violets for several years, and for a crazy reason. Although I love them, they are truly cat-hair magnets, and they just don't look right when they're covered in feline fur. But others have been writing about them, and photographing them, and blogging about them, lately, and I've felt the old temptation rising in me. But I was feeling strong, after my session at the shelter, and figured I could resist. So I'd just go down and see how bad they looked, and they'd be too far gone, and even I wouldn't bother trying to rescue them. Right? 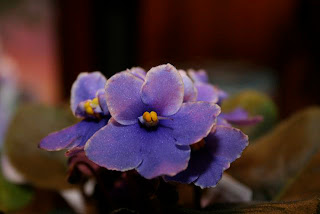 No, not exactly. They actually couldn't have been in the store for more than a few days, because while a few blooms were dwindling, others were still to come on, and I could see new stems of flowerbuds rising up from most crowns.

While I'm not a collector, I have friends who grow many African violets, and they always say that the most important factor in growing violets well is to have the right soil. Violets like a soil that is light and well-drained, and most violet enthusiasts make their own potting medium of a mixture of Pro-mix, peat, vermiculite and perlite, which they sterilize before using.

Violets thrive in bright but indirect light—any bright window except a southern exposure is usually fine. Interestingly, although they need plenty of light (at least 12-14 hours), they also need a minimum of 8 hours of darkness in each 24-hour period in order for them to bloom. Many enthusiasts grow them under artificial lights with timers to control the light period. You don’t have to buy the expensive full spectrum lights; ordinary cool white fluorescent tubes work just fine. These plants are happiest at around 70 degrees Fahrenheit, although they will grow in rooms as cool as 60 degrees or as warm as 80 degrees. They also like a little humidity, which you can provide either by running a humidifier in your growing room, or by setting your pots on saucers filled with wet pebbles. Just make sure the pot bottom is clear of the water so as not to give your violets wet feet. I know there are arguments about whether to water from the saucer or from the top of the pot, and some who swear by each method. I just treat African violets the same way I do cyclamen; I water them from the bottom, and don't let them dry out or get sodden, and they usually do just fine. Sometimes a plant dies. That happens.

I was thinking about these things as I surveyed the dozens of plants, all regarding me in mute supplication. Well...I COULD keep one or two in my office, which is quite cool when I'm not in there, and with the door shut the cat-children can't get at the plants, so there shouldn't be any issue with cat hair. And while these plants could still find homes with other customers, another week or so of being mistreated would tell a different tale, I knew. So what could I do? I did what had to be done, of course. 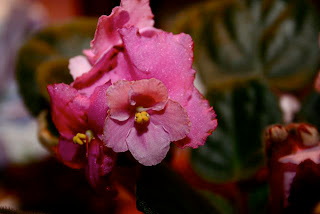 I only brought home four!