My summer in a garden 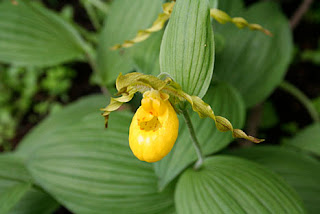 Because I haven't had time to hunt down or purchase the book for this month's garden bloggers' book club, (brought to you by Carol of May Dreams Garden) I thought I'd share a tale or two of my summer in a garden.

A garden can look like many different things, as we all know. The most memorable summer in a garden I spent was in the summer of 1979. And while the ‘garden’ included my father’s vegetable patch, an ill-advised herb ‘garden’ and my best friend’s father’s garden, the main ‘garden’ I want to talk about was scattered around Hants and Colchester counties—the garden of nature.

In the previous year’s studies at the Agricultural College, I had taken a course in Plant Identification; learning all about the botanical aspects of plants, from their leaf shapes to the types of flowers and flower clusters, to the art of using a key system to determine a plant’s classification…and I had done really, really well in this course. So well that when a summer job came up at the college to work on adding plants to the A.E. Roland Herbarium, I jumped at the chance to get hired. And did.

Together with another student and our overseeing professor, I spent the summer collecting, drying, identifying and mounting specimens of plants for the newly named herbarium. We mostly stuck to Hants and Colchester counties, with maybe one or two forays into Pictou county and elsewhere, and we worked on our own at times and individually at others. For a reference key, we used the amazing Flora of Nova Scotia, written by our own A.E. ‘Doc” Roland (after whom the herbarium was named) and E.C. Smith (after whom the Acadia University herbarium is named). If we really got stuck, such as on one of a gazillion asters…we simply took the plant to Doc Roland, who could identify just about anything, we figured.

This was the summer that my love of plants really, really blossomed (pun intentional). I spent a lot of my own time wandering through woods and meadows and pastures and along waterways, getting to know plants I had seen many times before but never really noticed or appreciated. And given that my course was in plant science and about growing edibles (primarily), I thought I should help out with our home vegetable garden by planting a herb bed to accompany the veggies.

The first thing I brought home was some wild peppermint, which I carefully planted in a small patch that my father tilled up for me, not far from the asparagus patch. I added a few other herbs—where I got them I don’t remember, but possibly I grew them from seed. Chives was one of them, although we had a family superstition about chives for many years: every time my father planted them, we got transferred to another province. However, the charm broke when we moved home to Nova Scotia because none of us has ever left despite countless plantings of chives in various yards.

Well…the mint, as you can imagine, ultimately took over the herb patch…and the asparagus patch…and the vegetable garden. Over the following few years, my father battled mint with the same ardour or fervour that I now battle goutweed. He finally abandoned that garden site and made a new one…and the people who now live there probably still have a ‘mint lawn’ in that part of the yard.

When I wasn’t working (one of four jobs I had that summer, two paid and two unpaid labours of love—I also worked at a campground on weekends,, helped my Dutch dairy farming friends hay, and led trail rides at the campground), I was at my best friend’s place. Her father was a terrific gardener, mostly of flowers and shrubs, which made sense because he operated a florist shop after he retired from teaching. So my life was all about plants that summer, and while I’d always been interested in gardens even as a child, the mould was truly solidified that long, sweet summer.

There are certain plants that to this day immediately flash me back to my first real summer in a garden, extended and rambling and wild as parts of that garden were; the smell of sweetfern (Comptonia peregrina) on a hot summer afternoon; the graceful fronds of ostrich fern (Matteucia struthiopteris), both in their edible fiddlehead stage and after they unfurl into waves of cool green; mint, of course, of any kind (always planted in containers now, thank you!) and the perfectly exotic, elegant and almost-surreal flowers of yellow ladyslipper, Cypripedium calceolus.

I can still find the spot down near Windsor where I stood awestruck looking at the patch of yellow ladyslippers with my professor/supervisor and colleague, and I still rejoice in the perfection of a wildflower—as well as in the jubilation of a wellgrown garden plant. My plant identification skills are somewhat rusty, true—however, the wonder of plants will never leave me.