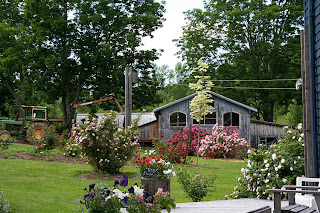 Take a walk with me at my friend Catherine's garden. Catherine loves roses, especially old-fashioned and hardy roses, and when we were there last week, most of them were in the peak of their bloom. I don't know how many shrubs she has, but it's at least several hundred, spread out across the rolling slope of her yard--and even up against the sawmill. 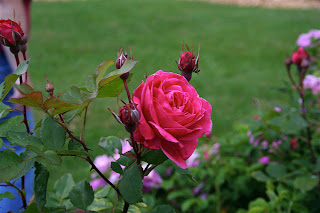 We had a hard winter in Nova Scotia, and it seemed to hit many usually-tough roses quite hard. Alexander MacKenzie, however, was not intimidated, being a hardy Canadian Explorer rose. 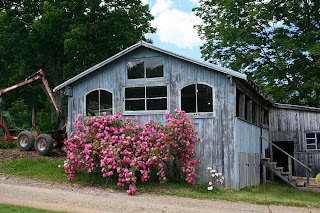 John Cabot, another Explorer, is listed as a climber because it easily reaches 8 feet when it's happy, and covers itself in blooms, as you can see. Catherine has bought many of her plants from CornHill Nursery in New Brunswick, and many others from Old Heirloom Roses in Hammonds Plains. 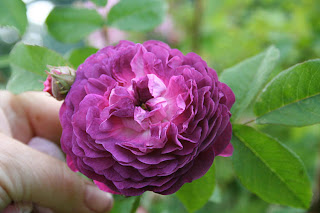 Cardinal Richelieu is a gallica hybrid, and while He only blooms once, his gorgeous roses and fine fragrance make this a must-have rose for collectors. 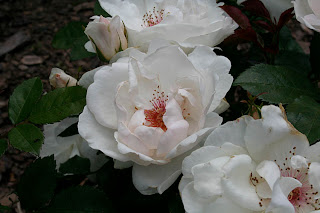 This is Jacqueline du Pre, named after the famous cellist who died too young from Multiple Sclerosis. Not only is this rose fragrant, but check out those burgundy stamens! I don't have this rose--yet. 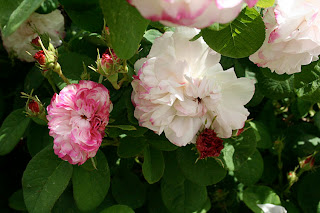 Catherine calls Leda a 'painted damask' and that's a fine description for this gorgeous, fragrant, and flamboyant rose. Don't you just love how the flowers are tinted with other colours? 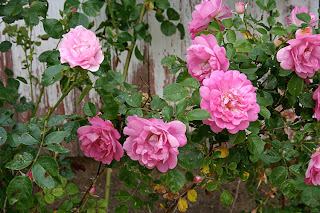 Voici Louis Jolliet, another Canadian Explorer rose from Agriculture Canada. This rose breeding program has introduced a number of very fine, hardy and disease-resistant roses for cold climate gardeners. They aren't all fragrant, which can be a drawback for some gardeners, but my philosophy is that I have plenty of fragrant roses so a few that aren't isn't an issue. 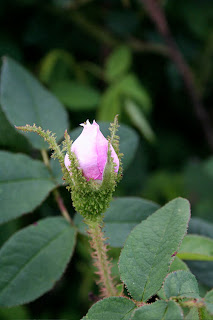 Moss roses are SO cool! This is probably William Lobb, the most commonly available moss rose, also known as old Velvet Moss rose. I have a reblooming moss rose from Cornhill Nursery, J H Kern, but it's a small plant and often gets overwhelmed by larger plants in our jungle-garden. 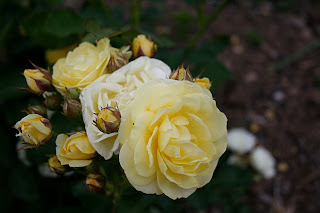 This charmer is called Golden Border--not a huge plant (I think it's new to Catherine's garden this year) but a lovely rose for those of us who are besotted by yellow roses. (My hand is up, here!) 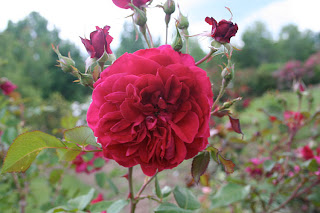 Quadra is one of the more recent Canadian roses, and Bob at Cornhill calls it a jewel of a rose. I also love it, and Catherine has quite a few of them. Rob at Baldwin Nurseries is getting in a bunch of them shortly, so many more people can get to love Quadra too. 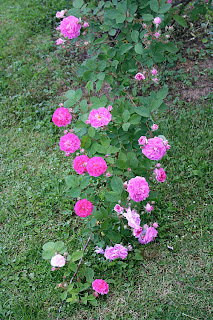 I love this! This is Seven Sisters, and you can see some of the various colours in the blossoms as they age. I would dearly love to try Seven Sisters in my garden; maybe next year (after I clear some more room! 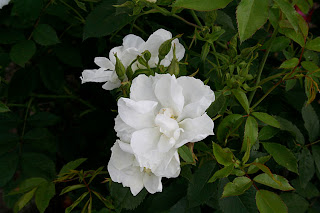 Ah. This is probably my second favourite of the Morden, Manitoba line of roses: Morden Snowbeauty. She's a lovely rose, pristine white and graceful. 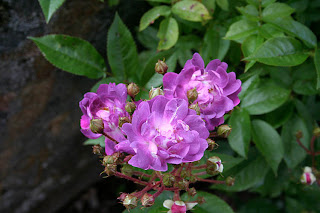 Last year, I threatened my Veilchanblau rose and it covered itself in blossoms. This year, I think I'll be living vicariously off Catherine's plant, because mine killed back quite hard and doesn't look like it's going to flower. Oh well. 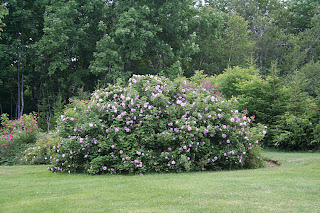 I stopped dead when I saw this and said something to the effect of "what is it I have to have it!" This is Wasagaming, an under-utilized rose, but oh MY! Fragrant, lavender blossoms, a tough rugosa...it blooms for a long time and profusely, as you can see: this is a BIG plant well over six feet tall and ten feet wide, probably. Happily, there's a sucker coming to live at my house...it's almost as wonderful as Snow Pavement. I don't seem to have a closeup shot of the blossoms, but the massive shrub makes a statement, all right--"Take me home!"

These are only a few of the fantastic varieties at Catherine's garden; she also does it all organically, and she's pretty well decided to only grow plants that are on their own roots, because of our erratic winters. It may take a few more years for plants to get to a big size, but they don't suddenly turn into wild multifloras or common wild roses when they die back like bud-and-grafted plants do. Even planting the graft 6 inches deep or more is no guarantee around here--I've seen roses planted that deep heaved up in our freeze-and-thaw cycles. No slight to grafted roses for those who can grow them--but they're not worth the effort to some of us, when there are such great hardy roses available.

Too bad I can't upload the fragrance of the yard...but it's awesome! Mmmmm. Must go put my face in Hansa or Snow Pavement or Polareis here.