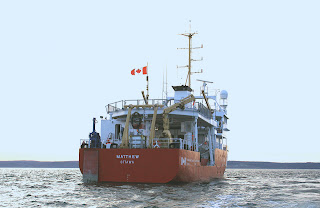 Gosh, I have to be one of the luckiest people around. I really LOVE what I do as a freelance writer. I get to tell stories about some truly interesting people, places, activities, and of course gardening and gardeners are included in that category. Today, however, while I am busy writing out some notes for an assignment, let me regale readers with my further adventures aboard the Canadian Coast Guard Ship Matthew. I arranged earlier in the week to go back aboard Matthew for a whole day, to trail along behind the hydrographers and other staff and the officers and crew, just observing how they go about their merry days, as I have assignment to write about their work. So I got the call first thing yesterday morning, and by 0830 I was at the wharf waiting for my taxi--the Fast Rescue Craft--to arrive and pick me up. The Matthew was waiting near the Split for us (out beyond the dancing water of the riptide, of course), and I was greeted by the chief scientist Mike Lamplugh and the captain Roy Lockyer. (Seen here with the quartermaster who is steering the vessel) 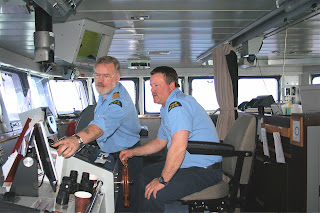 What a great day I had. I'm so fiercely proud of the men and women of both the Coast Guard (the real coast guard, the men and women who crew the ships, not the brass!) and the scientists who work with them; whether habitat biologists from Bedford Institute of Oceanography, or hydrographers from the Canadian Hydrographic Service, or geophysicists and others from the Geological Survey of Canada (Now part of NRCan) Lots of acronyms, of course!

The Matthew runs like a finely tuned machine; her officers and crew conduct this graceful choreography with the scientists conducting their research; the bridge officers hold the ship on a steady course while the multibeam arrays probes the bottom of the upper Bay of Fundy, scoping out the depths and the sea bottom's composition, all to create mindboggingly detailed maps and charts. 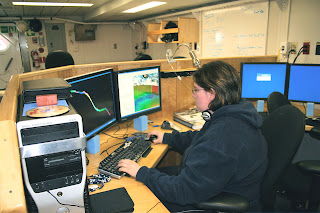 The engineers keep the ship, her engines, the launches and the FRC all humming and healthy, the deck crew operate the winches and such to deploy various pieces of way-cool science gear, the cooks feed us all like we're royalty (a good cook is worth his weight in gold on a ship, believe me, and the Matthew's cooks, Stephen & Greg, are outstanding! )

All this makes it possible for the team of researchers to do their thing; using state of the art, multi-million dollar equipment like the multibeam and a bank of computers and networks that would be the envy of most people, and the two launches, the Pipit and the Plover, that go in close to shore to scan the sea floor where Matthew cannot go... 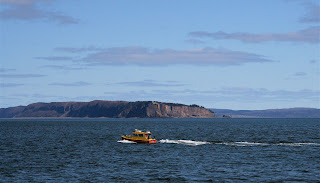 Most of us have absolutely no inkling of an idea what our coast guard does, or what the scientists who explore our oceans do--as one scientist told me several years ago, "the sea floor is not made of concrete". It's alive and pulsating with various types of sand, silt, cobbles, gravel, and bedrock, and accordingly vast and wonderful types of ocean life; each with its own role to play in that 'circle of life'. And there are marvels and mysteries most of us will never see.

So the hydrographers and other scientists on Matthew do their work, and they create stunningly detailed high resolution pictures of the bottom with which they can create maps and charts for mariners and others to use--and to teach us more about the marvels that are the oceans surrounding our country. 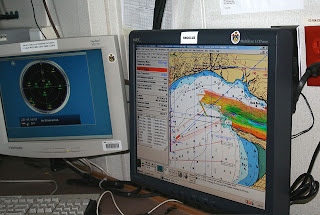 I'm always a bit wistful to take my leave from a CCG ship, whether it's from a brief visit aboard the marvelous Matthew or from the incredible Hudson where I've spent weeks, or even after spending more than a week doing fisheries patrol and search and rescue aboard the good ship Cygnus...but as we raced away from the Matthew in the FRC last night, en route back to the wharf, I whispered a quiet "see you later" to the ship and her people...with any luck I'll sail with her again, maybe to the Labrador sometime soon...and then there's my quest to get aboard Sable Island...a story for another day.