Days like today—cold, wet, dreary, with a hint of snow mixed in to the rain—are the days that separate the true gardeners from the newbies, according to one nursery operator I frequent. She grinned when I strolled out of one of her greenhouses today, clutching a variety of annuals that I NEEDED.

Yes, needed. Other hardcore gardeners are smiling and nodding, because we know what that need is like, don’t we? We’re transfixed by the blue of a Loddon Loyalist Anchusa. We see that the yellow tree peony is well developed and has two flower buds forming nicely. We learn that the daylilies are fieldgrown from root divisions, not tissue culture, and that Destined to See is not expensive. We see annuals that we’ve never tried before. Our friendly neighbourhood nursery operator has overwintered the Silver Sand plant that we killed by forgetting to water it for three weeks. And so it goes…we come home with a trunkload of plants. Again.

Well. I was feeling a bit behind the eightball because some of my blogging friends have been putting up glorious photos of their gardens in bloom. Ours has lots of growth happening, (including the appearance of the yellow trillium, YIPPEE!) and some bulbs and early perennial blossoms, but by and large, we’re like the late-blooming cousin—we’re late blooming. So I’m presenting a modest show of flowers that I like, mostly annuals, that are waiting patiently in my living room to be put into container plantings and set out in the greenhouse to harden off. And as a bonus, I’ll explain why this plant attracts me so much. Gerbera daisies: these are going outdoors as soon as it warms up, but meanwhile, they’ll entertain me here in my office. Their colours are so hard to describe sometimes, and so delicious…it’s hard to pick just one. 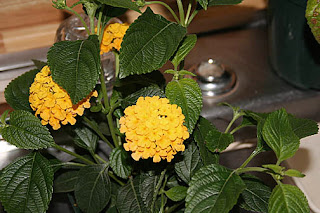 Lantana. It smells unpleasant. It’s toxic. And yet its flowers besot butterflies and hummingbirds alike. I love it because it comes in a range of colours, most of which start one colour and fade to another. That’s hard to tell with this yellow one, but I have a gorgeous red that is orange and yellow in the centre. Excellent in containers. 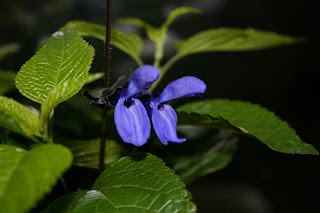 Salvia ‘Black and Blue’. This is a stunner. It really IS this blue—maybe even a little darker, as I had to use the flash indoors to take these photos—and the stems are black. The foliage is glossy, and it’s just a way cool annual. 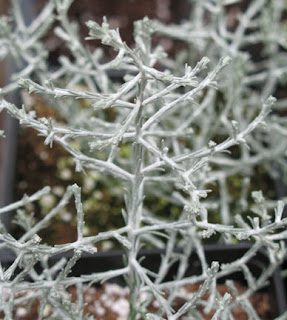 Calocephaplus ‘Silver Sand’. I first saw this last spring and immediately had to have one. It’s a native of Tasmania and Australia, apparently, and also goes by Button Bush, and has small yellow flowers. I don’t care if it ever flowers—I just love its silver-green foliage. Last year it lived in a terracotta planter with Black Mondo Grass and a white flowered thunbergia, and more people asked if it was real. I’m going to look after it very, very carefully this winter! 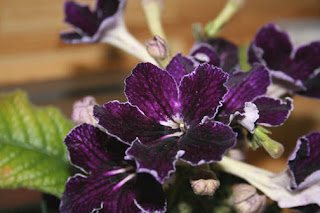 Streptocarpus. Den Haan’s nursery in Middleton has a whole raft of these in jeweltones. I stopped dead when I saw them, and said to myself, “You can only have ONE!’ These deep, royal purple was the one that insisted it needed to come with me. Others pleaded, but I was firm. 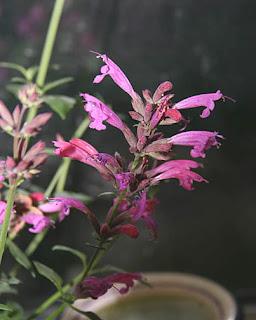 Agastache: You have to love a plant called Hummingbird Mint, don’t you? I do. I’m especially besotted by the salmonorange-pink cultivar I overwintered (but it isn’t in flower yet) so I content myself with this one. Hummingbirds DO adore it—I have a number of these plants strategically placed around the garden, in planters and planted out. It makes me happy to smell it, too—lightly citrus and mint, sort of reminiscent of bee balm but lighter. 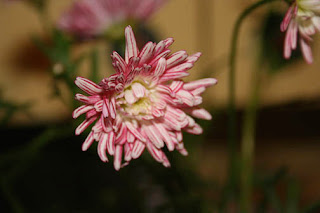 Agyranthemum. Daisies of all sorts delight me, but many of them verge on the ho-hum. Not this beauty. Your eyes do not deceive you—not only is it bicoloured, it’s stripy. Like a candycane. What could I do but pick it up? It’s a bit leggy, but I’ll whack it back after I use it in my talk tomorrow, and let it bush out some more. 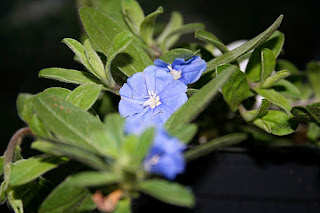 Evolvolus. Blue Haze. Isn’t it sweet? Blue, blue flowers, the size of quarters, all summer. It’s a relative of morning glories, and a charmer—I found it two years ago and grow it indoors as well as out. Don’t let it dry out, because it sulks and wilts, but otherwise it’s a steadfast performer, and much beloved in my containers. 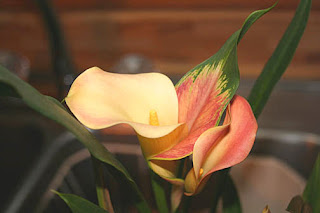 Calla. This is my first time growing calla lilies, and I’m going to put them in a container and see how they do. I may also add a ranunculus to the mix, just because I think the juxtaposition of foliage textures and flower complexity will be stunning.

Did I mention I’m going off on a jaunt tomorrow, too? Wonder what I’ll find that has to come home with me….