The top gardening aids I can’t be without

We all have things we can't possibly live without in our gardens. Here are some of my favourites, although with all the deadlines I have, there's not much time to use them right now.... 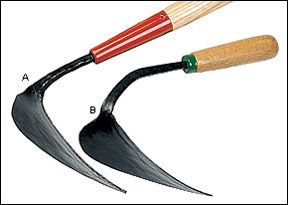 A ho-mi digger. I wrote last year about my digger, purchased at Lee Valley Tools, and how it came to an unfortunate end when my longsuffering spouse ran over it. Being a good guy, he did succumb to my broad hints and purchased me a new one this spring. We’re going to paint its handle bright fluorescent blue or orange, so that I won’t lose it anywhere again.

Good garden gloves. My favourites were given to me by Wendy Rittenhouse, of the venerable garden supply company, two years ago at Canada Blooms. I still have them—both of them! They’re made by West County, and they’re excellent—still holding together nicely after nearly three garden seasons of hard, hard treatment. I’m going to order their waterproof ones now, as I’m so impressed with the quality.

Footwear. I’m hard on footwear in the garden, and while it’s a bit early and wet at times, my favourite shoes for the garden are my brilliant turquoise blue Crocs. Yup. After having them recommended to me a number of times by fellow gardeners, I tried em…and I love them. In fact, I regularly wash them and wear them out in public as comfortable footwear.

Seedling waterer: Another marvelous offering from the marvelous people at Lee Valley. 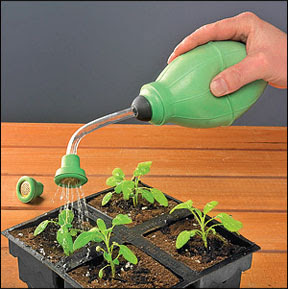 When I use it in my talks, everyone has the same reaction…. “ooooooooo…gotta get one.” It’s a rubber bulb that holds only 12 ounces of water, and you squeeze gently to put the water out through a brass rose with fine misting abilities. Works beautifully on seedlings, doesn’t knock them down or overwater them. I wish the bulb was a bit bigger, but that’s only because I have a LOT of seedlings now. Excellent, must have tool.

Camper’s Edge: From the brilliant people at Trail Blazer Tools, this could be called the Gardener’s Edge too.

It’s a combination of knife and saw, both of which fold politely into the handle. I started using this when I’m dividing perennials, because the saw cuts neatly through roots, and then the knife is perfect for dividing sections of perennials into smaller clumps. Trail Blazer makes a lot of awesome tools, and as I get to know the tools better, I’ll let you know more about the rest of them.

Seaboost. I know I’ve been talking about this for a few years. I’ll keep talking about it, too. It’s an awesome organic fertilizer, either liquid seaweed fertilizer or dried seaweed meal, and I use it ALL the time, indoors and out. The liquid can either be watered in or mixed into a spray bottle and used as a foliar feed. 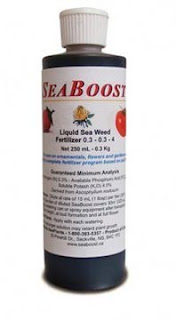 Joe also sells horticultural vinegar, neem oil and diatomaceous earth, all of which are ideal tools in the organic gardener’s problem solving arsenal.

Organic weedkilling brew. I forget where I learned about this, but it’s something I use all the time, especially in walkways or along the edges of gardens (where I want to kill off grass and weeds.) It’s a simple mixture to make, but as with chemical herbicides, bear in mind that it will kill ornamental plants as well as weeds, so be careful where you use it.

The recipe? Mix together one cup of salt into one gallon of vinegar and add a tablespoon of dish detergent or baby shampoo (I guess this acts as an emulsifier, but I’m no chemist). Pour or spray it on offending weeds in walkways, driveways, along edges of gardens, etc. A friend of mine used apple cider vinegar she got from a farmer, and sprayed half her yard with that and half with a glypsosate based weedkiller. The vinegared weeds were dying the next day, where glyphosate takes up to several weeks to do its thing.

Plants. Oh yes, plants. All kinds of them…

And what garden gear can YOU not possibly be without???