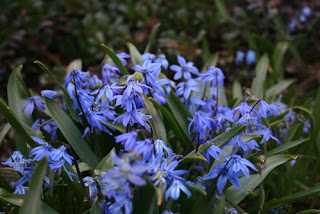 The weather has warmed up significantly in the Valley, and even up here it made it to 57 degrees F (it was near 80 in the Valley). Too windy for me to do much given my still crappy cold, but I puttered a bit and had a look at the growth happening. Some things I saw decidedly cheered me, starting with a burst of scilla.

The shrubs and trees are all nicely budding: in no particularly order, I saw nice new buds on the Amelanchier, (shadbush, chuckly pear, serviceberry), the Ilex verticillata (all three Canada Holly, whether male or female we don’t know yet), the Aronia melanocarpa (black chokeberry), the Katsura (Cercidiphyllum) both Chaenomeles shrubs (quince/japonica), the amur maple (Acer ginnala) and, to my husband’s great cheer, Crataegus ‘Paul’s Scarlet’ hawthorn. He was really worried about that young tree after the depredations of the white tussock moth last summer. I kept telling him that it would be fine. And it is, just as the horse chestnut and red buckeye, his two pride and joys, are doing. The wee Caragana, or Siberian pea shrub that I bought two years ago for three dollars at the high school yard sale has put on impressive growth, although it will need staking as it’s still sylphlike enough to lean hardover in some of our gentle gales of wind. The evergreens of various types are doing fine, a little windburn on a couple of them (no surprise there!) and they’re all such lovely colours right now. 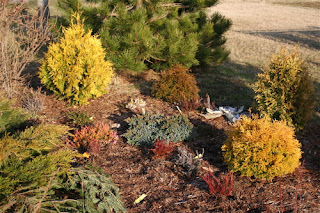 And then there are the perennials. I’ve already exulted about one of the Meconopsis crowns. Well, turns out there are four crowns happening on that one plant, and another one nearby has at least two crowns. I discovered another plant tonight in another location, and THIS one surprised me, as I let it flower last year without disbudding it. Now, it’s anyone’s guess as to whether it’s the blue one or the purple one, because I can’t exactly remember which was where in that spot, and photos don’t help, as they were surrounded by a sea of blue corydalis. So we’ll wait and see what happens.

Some of the plants that have challenged me in the past cause amusement with other gardeners. Take geums, for example. They’ve given me fits over the years, but it’s because they need good drainage in the winter. What do you know but I got several of them through in my special bed for unique and problem child plants—and the two fascinating herbaceous potentillas: ‘Arc en Ciel’ and another one, I think it’s Fireball but not sure, also came through with flying colours. Also poking up through with intriguing red foliage is Polemonium ‘Stairway to Heaven’. I really like this plant. If it never flowered I wouldn’t care, so long as I could enjoy its foliage, which reminds me of a Nishiki willow; green and white tinged with pink on new growth. Delightful!

A number of red trillium are up, which initially surprised me, because it seemed early for their foliage to be poking up. Not sure about the white or yellow species yet, because…ahem…I’m not entirely sure where they are. Labels don’t always stay where they’re put, especially here where we have such freeze and thaw cycles and wet ground and so on. I have a general idea where they are, and it seems to me they’re also later than the red ones. Lots of plants are slow in the spruce shade garden, but they generally come along, from hostas to gentians to bloodroot to mayapples to a variety of ferns.

Another plant I was curious about is the golden Japanese forest grass, Hakonechloa ‘Aurea’. It’s come through with flying colours, which leads me to think I should try the all gold form this year too. Bromus ‘Skinner’s Gold’ is up and looking great, and so is the variegated yucca I planted in Marilyn’s memorial garden (for my son, who when he was a toddler gave ‘yuckies’ as kisses to his grandparents). The yucca is a bit windburnt but I probably pulled the mulch away from it too early. Some other grasses like Calamagrostis ‘Karl Foerster’are sending up shoots, but it’s plenty early for many of the later-flowering species, and I don’t worry about any of them except the Japanese blood grass, which may not have liked the winter wet. We’ll see. If it croaked…there are always other plants.

What’s NOT up yet are the new echinaceas, but I’m not worrying about them. A quick visit to the well established E. purpurea clumps shows that they’re not up either—they tend to be slow up here, so I’m not sounding any alarm bells. Daylilies are up, hostas are not, but the big filipendula is poking through and SO is the ornamental rhubarb I got last year in Shelburne at Spencer’s.